KoЯn, no I mean Corn

Choke choke again, I thought my demons were my friends. . . Sorry I have the song stuck in my head. It was on Large's MP3 player. I'm trying to hold it together. . . 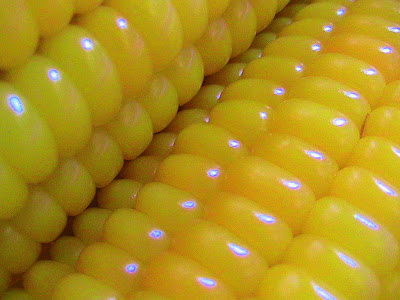 I get feeds from several groups. A couple of natural and organics food news groups and no GMO gardeners club. And the uptick of the anti-corn establishment has greatly increased over the last few months. Not only are they saying to stay away from HFCS and GMO corns, but all corn.
My favorite catch phrase has got to be "Corn has no nutritional value". Replace corn with KoЯn and I would agree with you.
It can be a bit difficult to get the truth about corn. I have seen several sites claiming that corn has B12. However it lacks that vitamin. It also does not block B12. Problems with over eating corn have been linked to malnutrition in countries where maize has been introduce. Corn tightly binds the amino acids lysine and niacin so they are not readily available. Native Americans noticed an issue and began mixing their corn meal with lye. Hello Hominy! How ya doing Grits?
With anything else, moderation is more than just essential. Having a well balanced diet is key to health.
So all these groups are warning off people from growing their own corn. Sad really. A juicy cob of corn with a decent bbq is a treat to say the least. And if you are warning them off of corn, you really should warn people off soy. GMO is a GMO after all. People rarely talk about the evils of soy GMOs. Let's switch our milk! bah humbug. Grow your own soy if you want to eat it, just like corn.
Confession time, I have corn syrup, I use corn syrup. I make candies and pies that my children eat out of corn syrup GASP!!! Not only is the syrup I use made in the US, but it is organic and GMO free. It isn't completely evil, as long as you use restraint and use it moderately. I am a little uneasy about people clamoring for others to use their influence to force themselves to use their own self restraint and their own brains.
I digress, back to not growing your own corn. This would make sense if you only have a small garden and eat lots of processed foods. You are eating a lot of corn that way. But if you grow the majority of your own food, or you rarely eat processed foods, then neglecting this cereal is doing yourself a misfortune. Let us proceed with the ravings of corn.
Sweet yellow corn, nummy, the joys of. . .

Now it does contain 606 calories per 166g, and 7.9 grams of fat (good for you fat) but it also contains 48% of your DV fiber. Yellow corn also contains carotenoid lutein, a phytochemical with antioxidant properties that can lower the risk of age related vision loss. Not nearly as high as that in green leafy vegetables such as spinach, but is still a decent source. Corn has a high beta – cryptoxanthin content, high levels of dietary beta-cryptoxanthin and were associated with reduced risk of lung cancer.

As for Maize (which several of us homesteader grow) as an energy source, it compares favorably with root and tubers, and it is similar in energy value to dried legumes. It is also excellent source of carbohydrates and is complete in nutrients compared to other cereals.
Another worry is soil depletion. Most people by now have heard of crop rotation. What one plant takes away another can give back. With corn, sorghum or soy works well in rotation.
Corn is not the end all of evil.
Growing and/or eating it is completely up to you.
I choose to grow corn, and to use a non GMO corn syrup for that special occasion treat.
This post brought to you by Phelan and her 2 cents.
by Phelan at 8:23 AM

Email ThisBlogThis!Share to TwitterShare to FacebookShare to Pinterest
Labels: corn

I do like me a good, hot, fresh roasted ear of corn with lots of real butter running off it!

Sorry, but my mouth is watering!

You are welcome Laura

as you stated, moderation. Anything that's grow in the ground was made to eat. Corn is high in starch but has lots of other benefits.That pic makes me want to go out and harvest some of our peaches N cream and scrape it off the cob and fry some for supper. Along with a good slice of country ham and some baked beans, I will have a feast.
Tammy