Not those kind of shrooms

We decided to go mushroom hunting this Labor Day weekend. 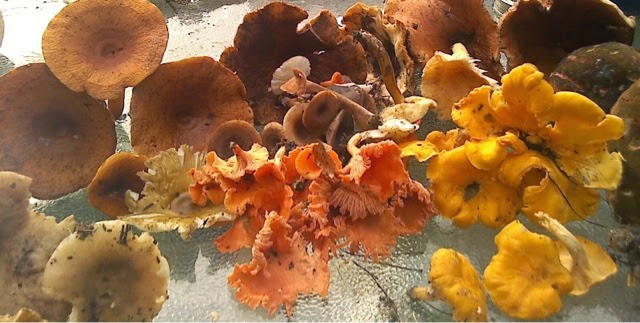 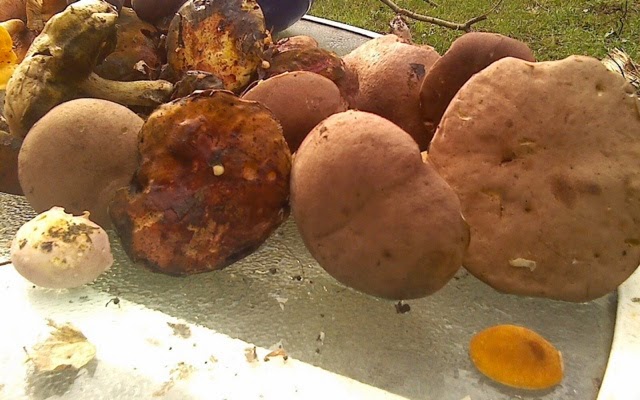 Husband, Medium, Small and I (Large wasn't interested) had a great time hiking through the woods. Small's mushroom finding abilities are truely supernatural. I called him a truffle pig at one point. He didn't take offense, merely snorted. The hike was good for Small as well. Two weeks ago I had to run him to the ER for stitches. He was playing in the creek and fell, cut his knee open and required stitches. He had just gotten them removed. He was a brave one rough the entire ordeal, however Medium didn't take watching his little brother get stitched up too well. A nurse had to take him into another room. I digress, we are talking about mushrooms. 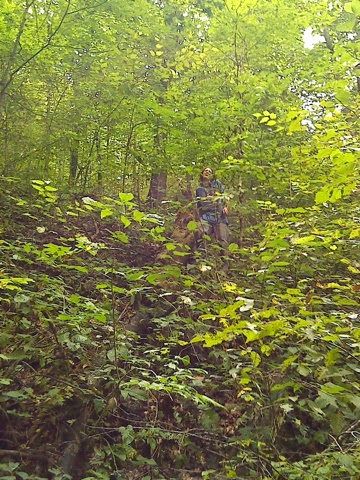 Medium called down to me, "found shrooms!" Then started singing on odd little ditty he made up. "You can't eat those" Small yelled in reply. "Not those kind of shrooms!" Medium laughed. I could only shake my head, what are they learning on the bus? 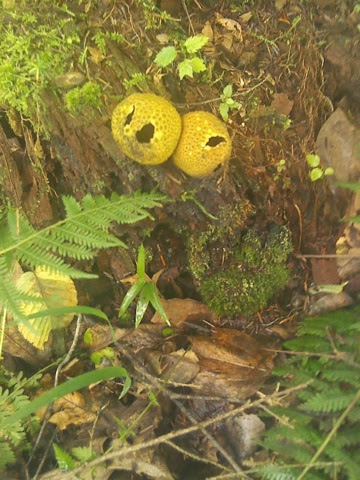 Suddenly aliens invaded! These puff mushrooms are too late for eating, however we did find a couple more that were just right. 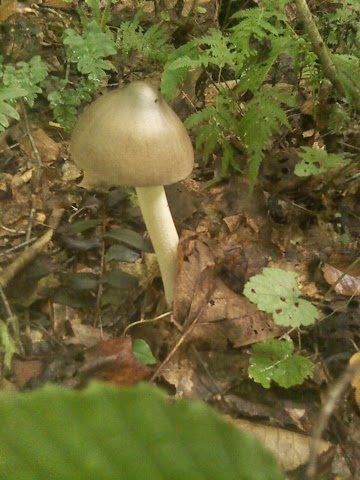 I deemed this one poisonous. Firstly I was unable to ID it in my book, and secondly, when I pulled it there was a volva surrounding it. In the book, only the poisonous ones showed having such a thing. 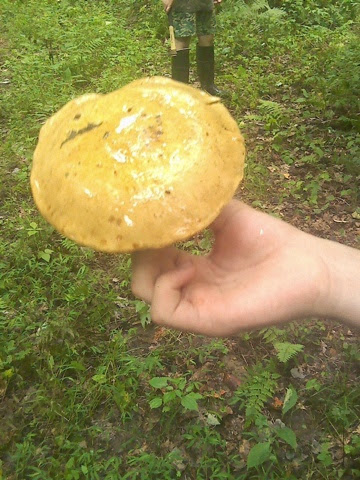 Another one I was unable to fully identify. The top was very slimy, however it had gills, not matching anything in the book. As much as I like "The Pocket Guide to Wild Mushrooms" I need another book. 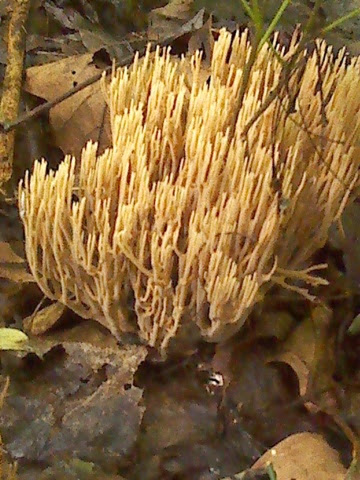 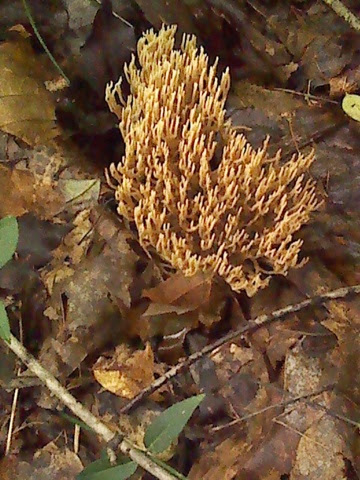 Husband made me hustle when he found these Straight Coral Fungus. Never seen such a thing above water, and edible too. 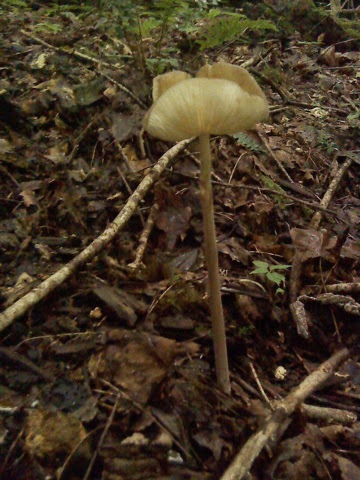 Didn't pick this one, due to it looking to much like a no-no. 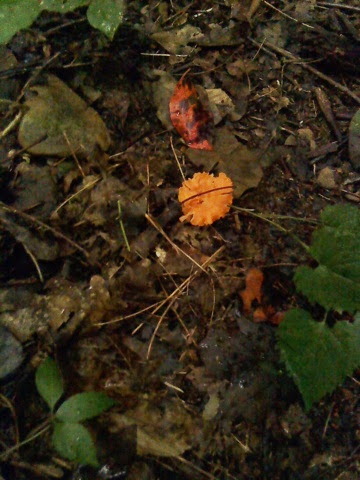 Now this Chanterelle got me excited. I know these mushrooms, and I know the difference from the false ones.  And we found many of the trues. 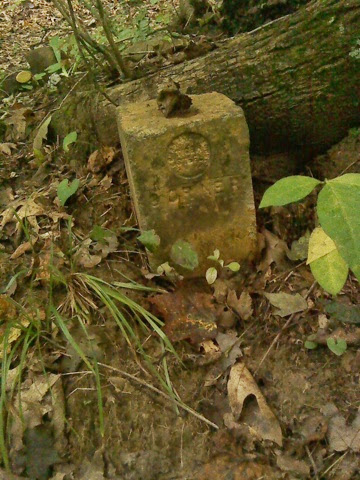 No, this is not a mushroom. It is a corner stone to an old road that use to go through our property. Found it with a mess of Bay Boletes and what looked like (in the book) to be Summer Cep. 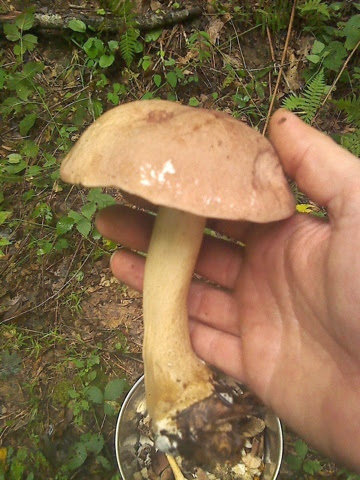 I can hear the laughter from my conversant shroomers. We will get back to that in a bit. 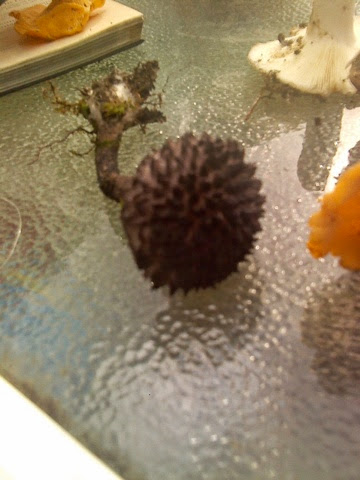 I think this one is called Old Man of the Woods. Was unable to fully identify though.

We also plucked The Gypsy and Corrugated Milk Caps.

Once home, it was my job to reexamine the mushrooms, to be sure of what they are.

Now back to the laughter.

I picked up the Summer crep. The book says that there are no poisonous look-a likes. However. . .

I broke off a small piece and chewed. Dear all that is holy! I spit it out as soon as it touched my tongue. Husband uproarious laughter followed me as a swished out my mouth with the water I had handy. It was Bitter Bolete. And it just wasn't bitter. It was so peppery that it burned! I heard Husabnd explaining the old bitter beer face commercials to Medium and Large, and their cackles shortly followed. Was I brave enough to do that again with a different type of Bolete?

The Velvet Bolete was Devine,the Bay Boletes turned out to be red cracking Boletes. And the taste was to die for. Small helped me prep them for drying, he loved the way the yellow flesh turned bright blue when cut. 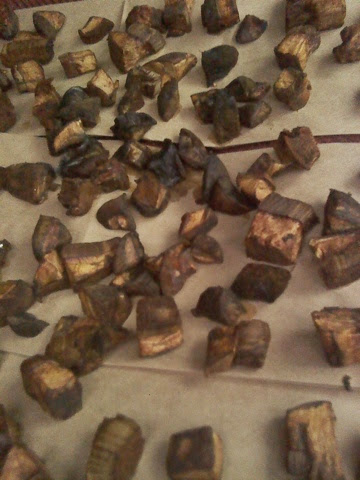 And though you take a risk drying out Chanterelles, I find it is worth it. They work beautifully ground up and added to dips. 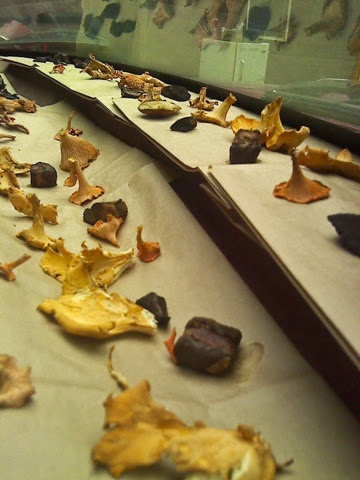 The milk caps and (found both Saffron and corrugated) were canned. I added a bit of dill to help bring out the shellfish flavor. 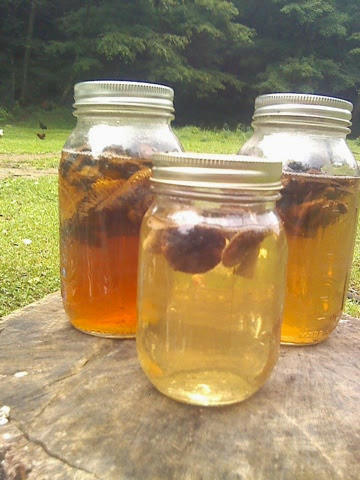 Oh, and mushrooms shrink when canned. I really should have cooked them for 20 minutes first, before canning, but it was starting to get dark, and I was exhausted.

That is totally cool! I love that you are teaching your kids about mushrooms!

Sounds like this was a mental health day for you! Fun with the family, cool things to find, fill up your larder and relax!

No that's a great find and everyone had fun finding them too!!
I haven't seen that many mushrooms in forever.

Took a short hike through the back part of our new property and didn't see much in the way of mushrooms. Or much more than hardwoods and grape vines. I want looking especially closely, though.