I had a wonderfully long chat with blogger, Kymber. She called me the other day, and reminded me of things, and reassured me on others, and helped me through my hissy fit.  She reminded me that I was to blame for her move to the middle of nowhere. She also reminded me that I can't shut up for very long. She is right, even doped up in the hospital I was still story telling. It's what I have always done.

Thank you for your encouragement.

We have NOT lost the land in Kentucky. We were in danger of doing so. But that status has changed. Yet we are still overly stressed about our future here. And the things I learned at my leisure in Kansas, has now become our survival here in Kentucky. I actually find myself considering eating fiddle heads, to my dismay. Those things look like caterpillars when canned!

I digress, Harry Flashman has also been a huge help with my state of mind. His emails and notes of encouragement have helped me immensely.

I wanted to publicly thank them, and you. And I wanted to apologize, I shouldn't have allowed the stress to overwhelm me like it did.  After this passed weekend, I feel much better, my outlook is up a bit, and I am joyfully exhausted (but that's a story for another day).

Saturday we had an unexpected visitor. He lives above us; down the holler and up. He had been at the shop the other day, showing Husband a tool he had made. As he and I waited for Husband to be done talking to a client, we idly chatted. He asked after our garden, and I told him about the broken belt, and hand cultivating. Even smiling and telling him it was all good, it helps us get closer to the soil. He smiled at that. But come Saturday I heard a very loud noise coming down the driveway, as I cooked our food on the fire pit.

"People" I called out to Husband as he worked in the garden. He stood, hands resting on the back of his hips, and we stood there, looking over and up, waiting for whatever might emerge from the newly leafing trees that obscure our view of the long drive. A medium sized farm tractor, brilliant red in some places, bounced it's way toward us. A tiller attachment made lots of racket as it bounced against its bolts.

Husband and I were all smiles, I was closer to tears in all honesty. Husband went to greet him. He told Husband that I had mentioned the problem with our rototiller and he came down to lend a hand. He had the soil tore up in a few minutes, doubling the size of our garden, and halving the size of our anxiety. He told Husband that he had once been in our shoes and just wanted to lighten our burden. We thanked him and told him to come after that small ironwood tree he had been offering to purchase, anytime. He more than earned it for going through all those rocks and roots.

Recently I have been learning a lot about my neighbors. They really love to tell their story. And I enjoy listening to them. Some I have written down for prosperity. Some stories should be told and shared. I have some very inspiring people living up top the ridge. Most come across as rough, at first. But as they settle in realizing that our clan is trying to be here for the long haul, they have become more open, and extremly helpful. I don't think I could keep going if it wasn't for the generosity and compassion, and the feeling of welcome they have extended toward us. I was fearful of our acceptance. Some that have lived in the foothills, and the mountains proper warned me that it might take years to be part of the area. I know we are not yet there, but we seem to have gained great ground.

We seem to have also made a good friend from one of the local Heirs. Heirs is not a common lingo we used in Kansas when describing someone. We know plenty of ranchers and farmers that have their money and land handed down from generation to generation. Here, they call them heirs. At first I thought it was someone's last name, "oh he's an Heirs."  Really, I really did think it was a family. "That land is Heirs."  "All that belongs to Heirs." Wow, that family sure does own a lot around here. Giggling at myself now that I know what they mean. But when you hear it, rather than reading it, well it sure did seem like it was a family name. Yet no matter what they are called, I am just happy to be making a friend or two here. (the fact the land was handed down to him means little to us, I just wanted to share that silly mistake of mine)

Sunday Husband and I had an adventure. That story is forthcoming. It was one of the best days we have had here, yet. And Small is finally feeling more at home. 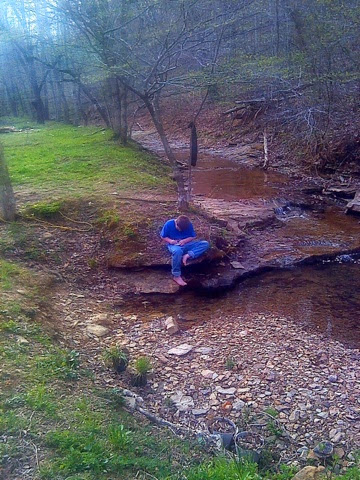 what wonderful news to hear! Kymber seems wonderful in her blog, and a,m so happy that she could help you emotionally. Everyone needs that person to cry to, and that will tell you it will be ok. I did not realize I think that you were doing all outdoor cooking, next package will contain more things leaning that way.
So so happy that the kids are settling in. I really think most rural people, anywhere, are there to help their neighbor still. things will get better, I just know it.
Thanks for telling your stories, I know we all enjoy them greatly.

Glad that things are looking better. Everyone has down spells, good to hear yours are on the rise.

Good neighbors are the best!!!! Glad things are looking up for you. I hated reading how down you were. What you guys have done is impressive. Not many people could live the way you do. I think it's awesome, although I know it must suck sometimes and this Winter was ridiculous. One thing about being down at some point you have to come back up :)

Unbelievably happy for you P...just keep faith. You'll get surprised more often than not by those around you.

Giggled at the "Heirs"...have also heard it called "Papered" and "Givens."

Hope the Holler has been spared in this latest batch of weather hissy fits!

I never tire of your adventures.

I never tire of your adventures.

Awesome news Phelan! Glad you have a new friend and neighbor there, and that things are looking up a bit for you guys.

Glad things are going better. I love your writings and look forward to more. Most "Kuntry folk" are friendly, sometimes you just have to make the first move.

thank you longtime wife...that is a very sweet thing to say.

Phelan - you know where i am and if there is anything i can do - you just yell. i love you girl. and yes, you are the reason i am in the middle of nowhere and loving every minute of it. you have taught me so much over the years and you always did it with such grace and never expecting anything in return. again - you need me - you holler!