Sunday morning I asked husband if he wanted to go mushroom hunting with me. He readily agreed, although we had many other things to be doing, this was on my important list. Morel mushrooms should be about, however, alas! We found none. Yet we did find a plethora of last years offerings, and know where to go for them once they have reemerged. 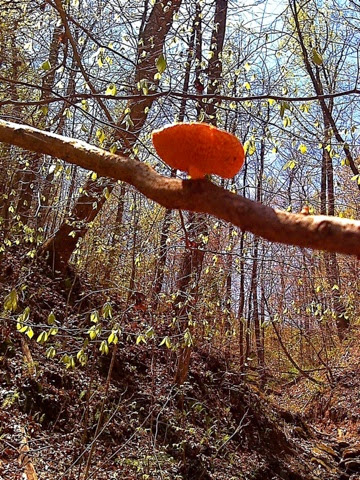 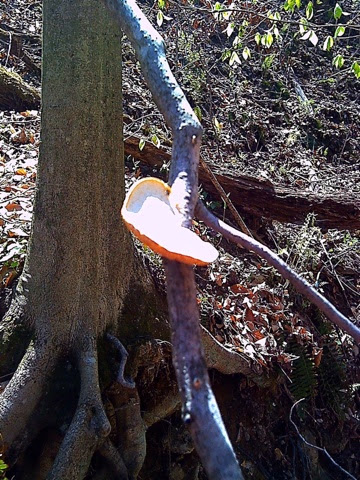 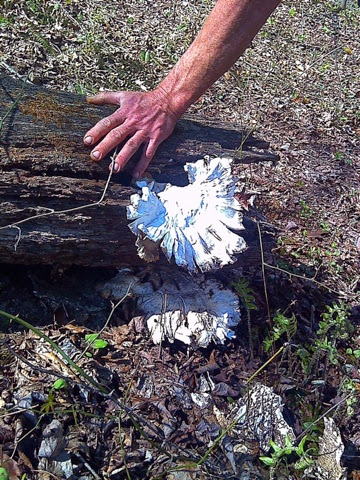 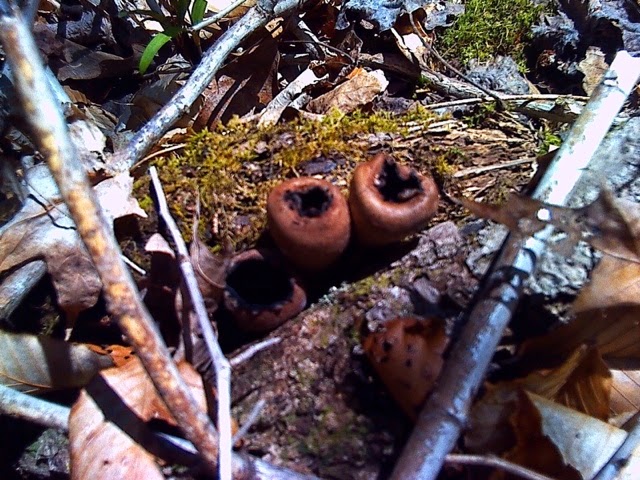 I have a mushroom book review coming soon, and will fill you in on the what-nots of mushrooms then.
We woke to a glorious morning. We are out of propane, and truthfully have been for the past month. Luckily I have a wood burner in the house, that with the use of  flywheels, works beautifully as a cook stove. The mornings still hold a slight chill,  and starting a quick fire, using the highly flammable poplar wood, isn't unpleasant. It dries quickly, and burns easily. Perfect for cooking when the weather starts to warm up and you don't want heat inside for very long. With coffee brewed, and dirty jeans pulled on, Husband and I left the boys to there own devices. Hoping that they would use some of their super powers for good.  I realize that is asking a lot.
Supplies in hand, or um in backpack, Husband and I headed to let the cows out to graze before heading to a smaller ravine. One I hadn't yet explored very far. No mushrooms to be spotted, however we found an old, crumbling well that is on the same side of the ravine as the old, crumbling cellar we found, just deeper in. There has got to be an old house near. 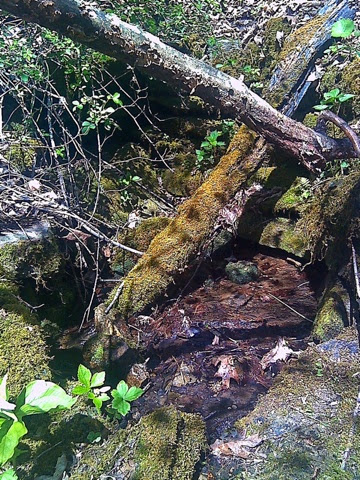 Husband and I walked a distance, until I was stopped by a fallen tree that there was no hope of escape from. 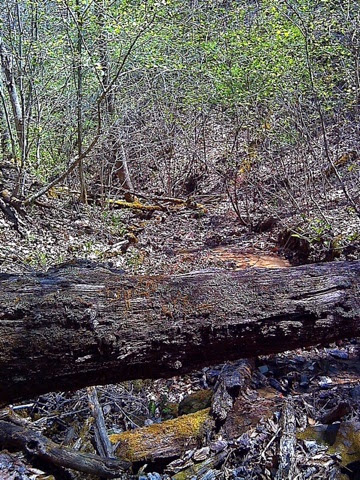 For me that is. Husband thought he spotted a landmarker up ahead, so while he explored a bit more, I took in my surroundings. 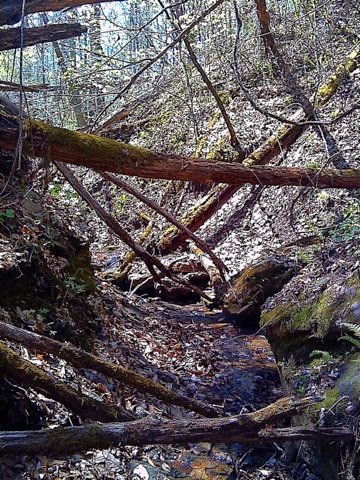 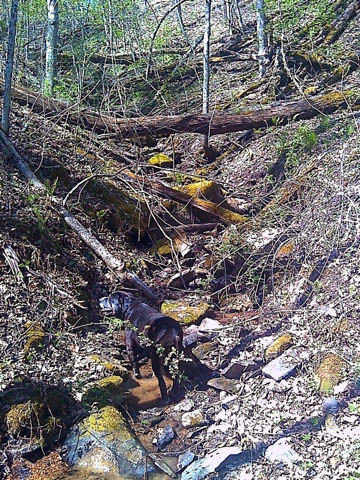 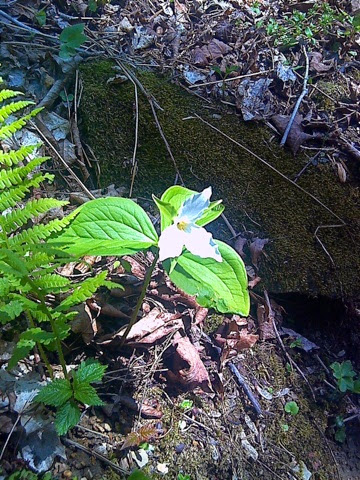 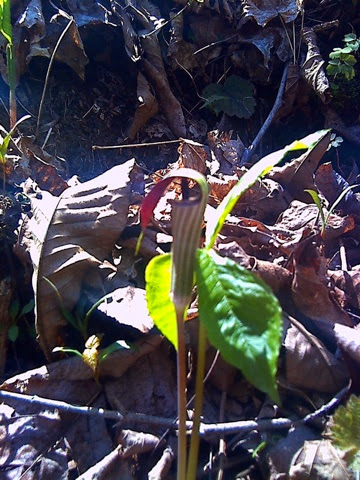 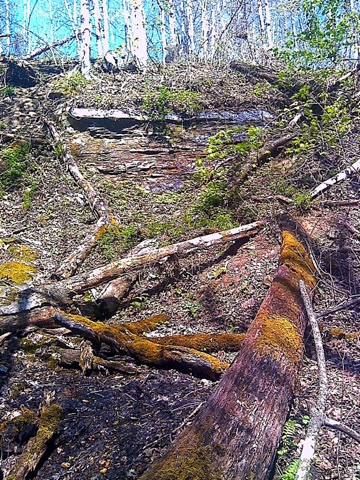 "Up to your left!" Husband shouted. I looked up from the ravine, there was Husband double hand waving down at me. I yelled that I would meet him on the drive, near that white growth. Husband had other plans. "You should be able to climb right up this." I looked up, and shook my head. What was he thinking? I am still gimpy. Yet with Husband's, we shall say encouragement (not childish taunting) I started up the side of the ravine. At little past the half way point the soil became less rock and log and more soil and mud. My boots could no longer find purchase!

"I can't" I cried out, slipping slightly. I looked down, luckily vertigo didn't set in. It was a 70ft climb, at a 60% grade, down to the rocks and boulders and fallen trees that make up the bottom of the ravine. Suddenly Husabnd was over top of me, a long sturdy branch in hand. I pulled, and slid, I even used my overly sensitive knee and scarred elbows to make my way up. With only one sharp cry of pain, I made it to the top. I then proceeded to inform Husband of his impending doom if he ever encourages me to do something like that again. He kissed me in response.

Once I gathered my wits about me, I braved the small pine grove. There are mushrooms that specifically grow in these areas. And though I am allergic to all things evergreen, I was on a mission. No signs of mushrooms, however I did find a young persimmon tree. That deserved a celebration in of itself. I also believe we stumbled upon a crabapple tree. But I will tell you for certain when it fruits.

Over the top of the hill, we followed the drive down a bit, before veering off, and back onto a deer trail. We found violets, pennyroyals, raspberry and blackberry vines. The white was indeed a huge mushroom, but it was from last season. We found remnants of the year before that as well. And we plan to return in the warmer months to see if new growth is occurring.

I could feel the sun warming the air, and asked Husband if we should call it a day, return to the house and work on other projects. Husband would hear of no such thing, and reminded me that I wanted to go into the holler in the holler, as I had seen a treasure trove of Oyster mushrooms in there last season. Husband was in adventure mode, and even after my climb, I was still feeling good. My new normal has been fatigue in the weakened leg over short distances. So I agreed to continue on.

We entered the holler in the holler, mufti-flora rose thorns grabbing at our clothes, newly erupted raspberry bushes clamoring for attention, and ancient blackberry vines hindered our passage. I opted to walk in the creek bed. Less plantlife to contend with. 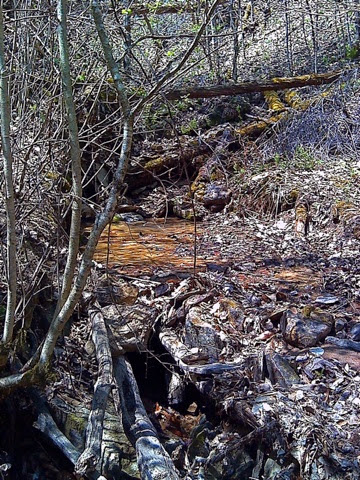 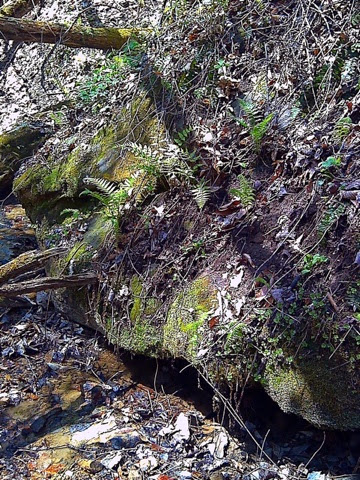 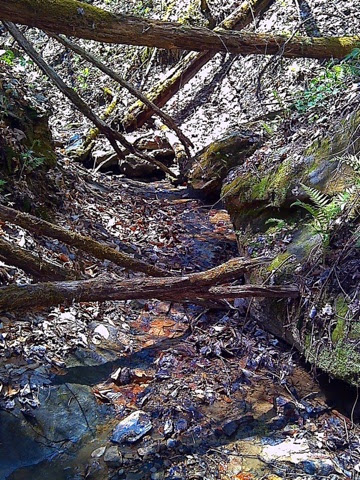 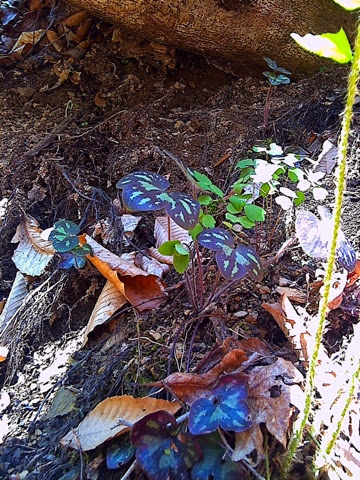 Plenty of rocks, bolders, logs and water though. My boots have finally failed me, and soon I was slushing inside of the left one. We walked and clamored for a half mile. I then took the opportunity to lounge on top of a boulder and declare defeat. Husband would not hear of this either, and allowed me the briefest of moments to recuperate before ushering me onward, and upward.

I only became stuck once in the mile hike. A fallen log I attempted to climb over. My knee still doesn't bend as easily or as far as it once had. I look solemnly at Husband and asked for a bit o' help out of the awkward stance I found myself hung up in. He, with a smirk, slid my foot off the dead tree. We found aging bones. Husband declared cow, but I decided it was a crime scene. A place where the body of a rather behemoth of a man, with oddly articulating hip bones was discarded. "Oh. Ok." Was Husband's witty response.

I made it to the dead end of the holler in the holler. It was now time to scale yet another steep hill. However not as long and not as steep as before. And we took the driveway back to the house. Where we discovered our four hour absence had not gone unnoticed by the boys. We were scolded.

What a great adventure!!!!!

What a great adventure!!!!!

What a beautiful place you have! I cannot wait to come and hopefully explore some day! Take the asprin for your knee and take the vitamins too!!!!
I want to learn about mushrooms, I really want to morel hunt...need some time to wander the woods. Did you know about ginseng in your area? Apparently it is very very expensive, and they pay real high prices for it. I was thinking of planting some in my apple orchard, it take 5-7 years to mature, but the money to be made is crazy. So go find you some ginseng too!!!

I think you are very brave to climb those ridges & also to eat wild mushrooms. Morels would probably be my limit. We just started some Shiitake in logs. 2 to start with to see how they do.

Can't wait to learn more about the wild ones from you!

Wonderful pictures! I especially enjoyed the pitcher plant in the 10th photo. In south Alabama there is a pitcher plant bog that's part of a nature preserve.

That sounds like a good adventure. You are braver than I am about the mushrooms, but with your skills you should be able to enjoy them safely.

Finding a persimmon tree made that ordeal worthwhile.

to say your a bit of a Bad Ass is an understatement.