Babes in the woods

There is something screaming in the hills, and it's not us.
Not any bird we have heard, not a hurt rabbit, nor bobcat. We have no idea what it is. It almost sounds like a howler monkey, but higher. Scares the bejeebers out of the dogs.
Things are slow, but are starting to come together. 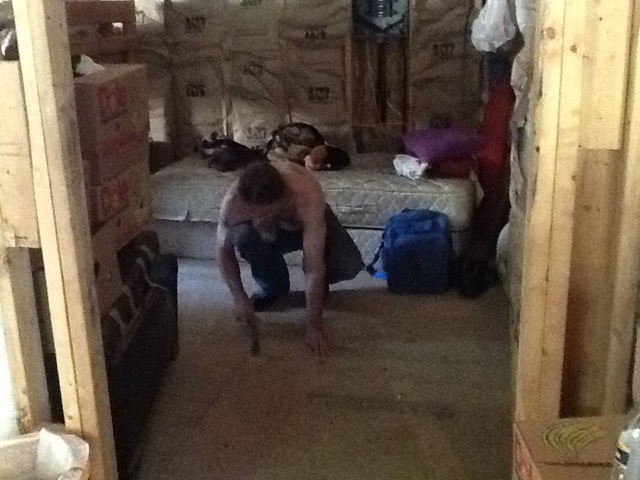 The boys are loving the salamanders. So many colors to choose from. Husband caught me an orange one with blue spots. The boys seem to be good at catching the blue tailed ones. Medium brought one in to show me. And it jumped from between his fingers, landing on the floor and scurrying under the puppy. Husband kept rolling her while the boys attempted to catch the salamander. Poor puppy was confused, everyone staring at her, then rolling her over and over, squeals of laughter near her ears. Finally the critter was caught and brought back outside. Medium and Small have now decided to save up their money for an aquarium.
Large is growing up to be a fine young man, despite the fact he is a lot like me. He has developed a work ethic that is shinning here in the holler. His blue and green hair, riding boots, gothic shirts and torn jeans garners a bit of attention. He has been working so hard, helping us make this place a home. I am proud and thankful.
Husband is in a lot of pain though. He hurt his back before we set out. Same place from the wreck. It makes working down here difficult. Of course none of the boys will allow me to do much real work. Everyone says I need to calm down and not try to do things that could hurt my leg. It's frustrating. So many things I could be doing, if only allowed. I am trying to do little things to keep me busy. But watching husband hurt, makes it hard on me. I want to make him stop and allow me to take over. Large has been helpful in this regard.
Here's something we saw in one of the towns. 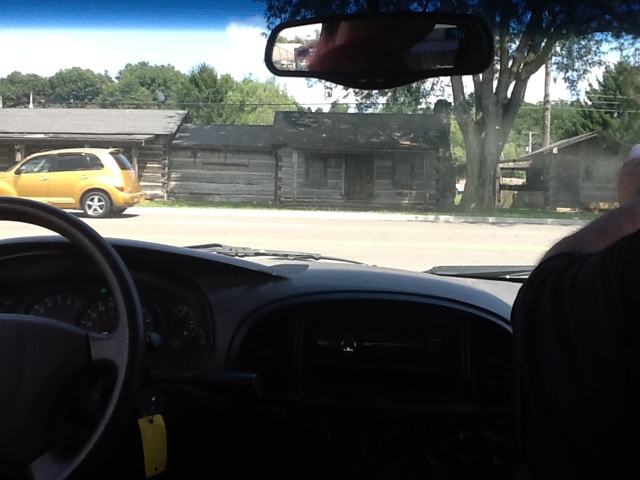 Medium took the picture.
I have gotten to know one side of the Ridge. Now I get to drive around the other side, getting lost and calling Small Farm Girl for help. I have a feeling I might be able to get lost enough that she won't even know where I am.
Ironweed, jewel weed and golden rod is in full bloom here. Come morning I will be headed out into my yard to start harvesting said plants. I plan on some balm with the jewel weed, cooking with the ironweed, and syrups and powders with the golden rod. Chestnuts have began to open as well. I bought some more blue jars this morning. One guy wanted $7 a jar. Because they had the lids. But I found the gentleman I bought the last case from, and bought more at that $2 a piece price, with the lids. Also picked up some small tins and tonic bottles with stoppers.
It's been almost a year since the motorcycle wreck, and today Husband surprised me by replacing my wedding rings. 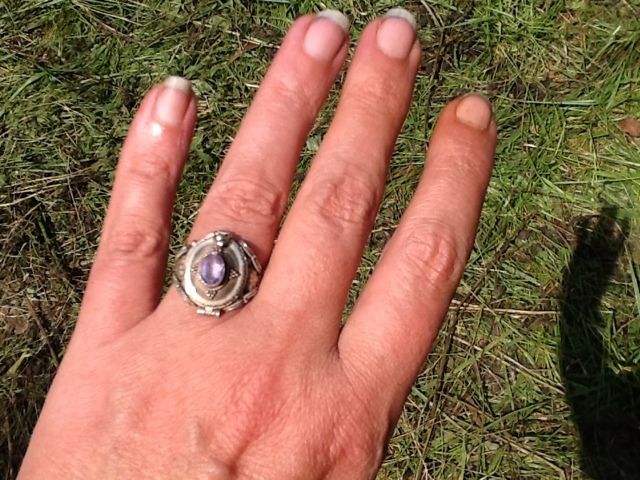 He knows me so well. He found a 1940's poison ring. Sterling silver and amethyst. And it fit perfectly. Almost like it had been sitting there waiting for me. I adore him. Yes, I know, strange wedding band, but it is perfect for me.
Last night Husband and I lay by the campfire, holding each other and staring at the stars.  Even if I live in Banshee holler, it feels like the right place for us.
by Phelan at 3:15 PM

Nice, nice ring. I'm a sucker for all things silver.

There are a lot of noises that come out of our woods at night which I can't identify. I've been here many years and there's still a lot I don't know about the forest.

It was good of your husband to get the ring for you. Sounds like you have a really nice family.

Red fox? At certain times, they're screamers rather than barkers.

(I can't tell if it took my post for moderation or if it ate it. Just in case...)

Red foxes are sometimes screamers rather than barkers:

That screaming sound ya'll are hearing is most likely a peacock....I got one of them damn noisy thangs out in the woods near me.....mostly the loudest around dusk.

Have you ever heard a red fox call? FREAKY. See if that's what you banshee is.

And I just love the new wedding ring :)

I followed your link KF, and it wasn't that. However Small Farm Girl found a video with different calls, it is red foxes at play!

Oh Dear, I hope hubby slows down and takes care of his back.
I'm happy to hear Large is really helping out getting you all situated in your new place.

What a beautiful silver and amethyst ring.

Phelan - THAT ring is beautiful! try not to do too much at once honey. i know that you are probably biting at the bit to be out there doing everything at once...but make sure not to overdo it. the same for Husband. it'll all be there for you guys in 2 months, 3 months, 6 months, just both y'all just heal up first k?

Beautiful ring!! Glad ya'll are enjoying Kentucky so much.

Those sounds would scare me as much as they do the dogs. It sort of feels nice to be stuck in the city now. I heard coyotes in the neighbor's front yard. That kept me indoors at night for several weeks. Are the red foxes dangerous? Nice ring.

Glad you found the source of the screaming, but I have to say, I like the name Banshee Holler!
Sounds like you've got some fine young men there Phelan. You have every right to be proud of them and it looks like Medium has some real photography talent! I'll bet he's going to find lots to photograph in Banshee Holler!
Sorry to hear about your husband's back issues. Mine has problems too and probably needs surgery but he's too stubborn to go to a doctor about it. I tell him to try to do some stretches every day & I've gotten pretty good at backrubs, but he's in construction so by the end of the day, he's walking like Father Time on New Years Eve.

Oh my goodness. I have been missing for awhile. Lots of catching up.

Love the ring!
Sounds like you have found your niche in the world..I am so happy for you :)

That ring is gorgeous! I love unique jewelry. Could the screaming be coyotes? I was just watching youtube videos of them yesterday and they have some really strange, horrifying vocalizations.

Hello. I've been reading your blog with interest. When I saw your unfinished cabin next to the woods, the terrain, cave, etc., & your comment that no one wanted to live there, I thought it might be a Bigfoot habituation area. I decided not to say anthing then. However, now that you mention strange sounds, I've decided to post. Dogs are not afraid of animals, they usually start barking like crazy & even go after them; Bigfoot is the only creature that scares dogs & turns the meanest bear dog into a scardy cat that hides under the bed, quaking from fear. Not saying you have a Bigfoot on the property, but you can certainly be aware of your surroundings -- if you do have one & they have "persuaded" other folks not to live there, then they might try that with you as well. Kentucky certainly has Bigfoot sightings.I'd probably ask around to see if anyone has had problems with them. You might be surprised what folks have experienced & keep to themselves to avoid ridicule. You can also check on Bigfoot sightings for your particular county online. I'd be happy to do that for you if don't mind mentioning your county on your blog. Not trying to scare ya here. Just find it interesting that you have been hearing sounds & the cabin was left unfinished. What with all the preppers around, an unfinished cabin seems strange. Remember that Bigfoot need certain types of food -- deer, small mammals, & lots of natural growing things like berries & fruit & a water source. They "mark" their territory by bending trees; you can be observant while in the woods to see if you have any of these bent tree figures close to your cabin. It's believed that they live deep in caves during the winter. Of course, bears & even moose can bend trees as well. Hope you don't mind my posting this. I know a lot about Bigfoot & hate people who make fake footprints in the mud, so I am not posting this as some kind of joke. If you don't want my post on your blog, I would understand if you remove it.