Preppers and homesteaders and BBQ oh my!

Large turned 16 yesterday. That makes a few of us feel old, haha! But I did what any good mother would, I let him spend the weekend playing D&D at a friends house while I went to Oklahoma for the day. Hey now, he had the option, and because of the impending move, I gave him the choice, family or friends. And like any 16 yr old, he chose friends.
So off to Ok we went, Husband, Medium, Small and I.  After the storms that went through Moore, I came to find out that some fellow bloggers only live about 3 hours south and east of me. And once again, with the impending move, I thought it would be nice to meet with them before we went. And I am glad we did.
Google maps owes me some gas money. 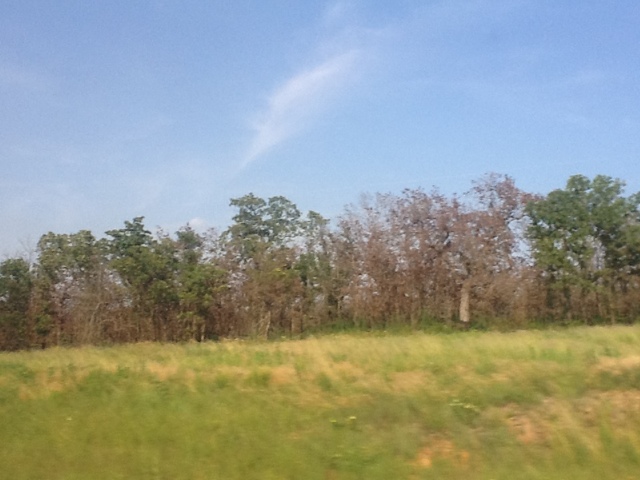 (Don't let Medium have access to the camera. You will get 400 pictures of a lake)
Google maps sent me 15 minutes out of my way on a very very rough road. Ok roads are bad to begin with, we always know when we have hit the border by the change in the road quality. The reason Husband put a sissy bar on the bike was because of Ok roads and my bounce onto the fender of the motorcycle! I digress, google maps caused me to be 30 mins late to my meeting!
I had driven 3 hours to meet with Scifi Chick, from over at Bacon and Eggs. I met Sci while writing for the American Preppers Network.  She has some great articles on prepping over on her blog. I had Husband park on top of a hill so I could get cell service, and gave her a call. Even she had no idea where I was! It wasn't until I explained what was on the highway where we turned off, that she figured out where I was lost at. We over shot them but 12 miles. Once again, thanks google maps.
She waited at the end of her road as we back tracked. Sci and the cutest cattle dog waited for us. We followed her, on a much better built dirt road, to her place. Sci and her husband have a great set up on small acreage. Veggie garden, edible flowers, chickens, outside sink and stove. Very cool.
When we arrived Sandy, from Oklahoma Transient, and her husband were already there, waiting for us. Sandy just popped into my blog life one day. (When I said that her husband chuckled) it's true. She started reading when I was in the hospital. And as high as I was and the sudden commenting by her, she was just suddenly there. I don't mind. You might have seen some of her comments around here.
We talked and laughed, ate some yummy ribs and awesome side dishes that Sci and her husband prepared. Sandy brought this great dessert dish with fresh peaches and strawberries. Sci's husband, Mars, got the pellet riffles out for my boys to shoot with. Now Small wants a scope for the .22. I told him that was cheating, like using a compound bow. He laughed. He knows he has to get good at shooting a long bow before we get him a compound. I want them to be able to use things that they can make if they need to. (I was playing, so no one get upset about the cheating statement). Mars and Medium had a shooting contest. I was informed Medium won.
Husband and I really enjoyed meeting Sci and Sandy and their husbands. I was glad we took the day trip. As we were leaving though, Small got a migraine. He threw up at Sci's house and again in the truck on the highway. I got him cooled down and to a point he could fall a sleep. 20 minutes later he was wide a wake and feeling just fine.
Medium's lake picture I have a couple hundred more if you want to see them.
by Phelan at 10:16 AM

SO now I have visit envy! How wonderful you were able to meet up. I bet you had a blast. One thing I love about this blogging group is the various ages have no bearing. We're all at different steading stages and offer only encouragement and positive advice. You just don't find that much in the "world"

We did! Sandy and Sci, and their husbands, are wonderful. Don't get too envious, we will be meeting before you know it. :)

We all had such a wonderful time eating good food (some of which was from the garden), talking up a storm, and just being outside at Sci's place watching the boys shoot targets.

My husband and I were very happy to meet up with awesome friends. It's great to be able to know the person you've been communicating to through Blogger. We need to do this more often :-)

dang nabbit! i am thrilled but also filled with jealousy! i am soooo glad that you got to meet Sci and Sandy - and i am glad that you all had a great time!

Google Maps will get you lost every time. Google Maps are less than worthless.