Are you my Mommy?

I will admit I didn't actually look to see what sex the lamb was before I started talking about it. It just didn't really cross my mind to look at it's junk while trying to save its life. We have a boy. A little ram that has decided Husband is mommy. Harrumph. Doesn't seem to matter that I saved his life, oh no. He has formed an attachment to Husband. He just tolerates me and the dogs during the day.

However, because of this development, he has earned himself a reprieve from future execution. He might even end up with his own set of goggles and a sidecar. But we will have to wait and see on that one. He is currently being treated like a puppy.

The plan is to band him, and then train him to pull a cart. Lead rope training starts today. If we wait too long, these rams tend to get thick in muscle and in head, and training will become difficult. Right now he sleeps with the dogs and jumps up on human laps for a snuggle. And boy is he super affectionate! He leans his head in for scratches and everything. Such a change from the other sheep that want absolutely nothing to do with you if you don't have a treat for them.

This is the second time I have had a lamb in the house, and the first one I was able to save. I have had many a goat kid in my home, those super destructive buggers. Lambs are just as bad. They aren't as jumpy, yet they will chew on everything. And I mean everything.

His name is Bobbert, being the last of BobDole's legacy. He steals the bones from the dogs, snagged a cracker out of my hand, and rips up the carpet. He bit Small's finger so hard it bled. But he doesn't jump on sleeping children's faces. See, bright side.

He took his first truck ride yesterday, securely curled up on Husband's lap. I foresee driving down the highway, scaring the bejeebers out of other drivers as a hugely horned ram stares at them from the passengers side window. This might be fun.

I placed him on the ground outside to see what decision he would make. Apparently he knows that he has it good in the house. He stuck right next to my foot and paced me into the house. As soon as we hit the bunker/fire room, he flew up the steps and perched himself on the couch. He completely ignored the bleating of the other sheep. He is a house ram. 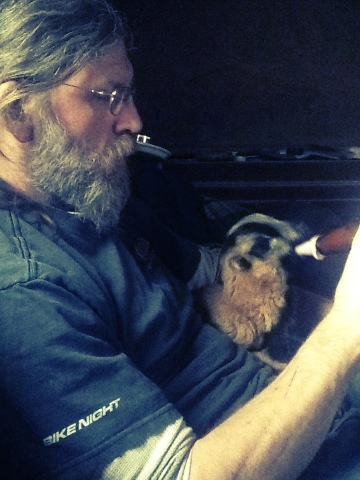 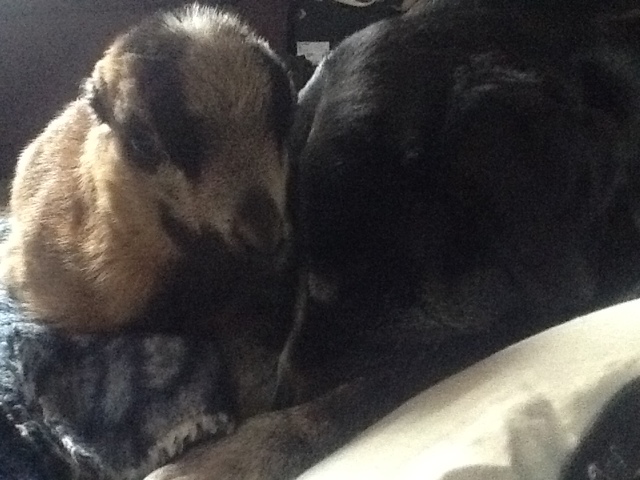 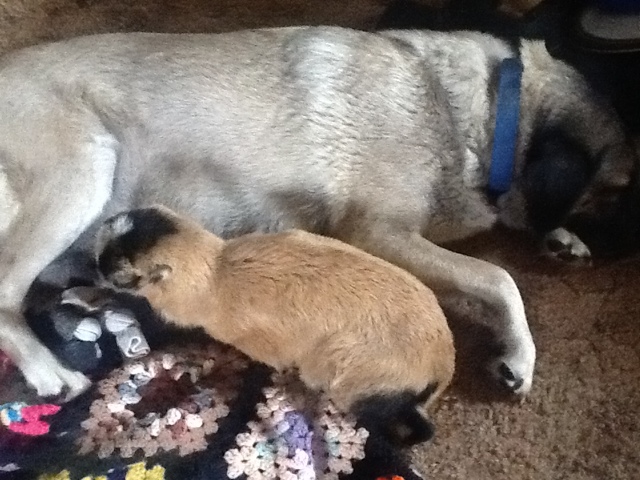 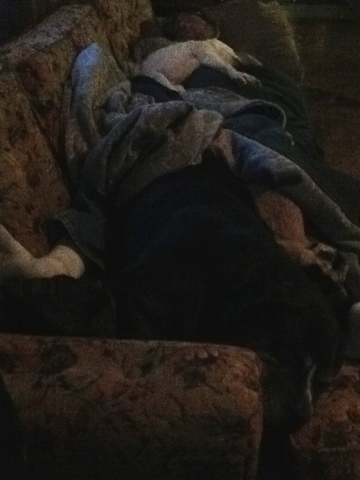 Men, rams... we all can get a little thick if not properly schooled early. :) Good luck on that. If you can harness a male type, you can definitely get a lot of work done!

As to his preference for the Mr.? I dunno. I've stolen a lot of pets from my past 'hers'. Not sure what that is about, and it might not be fair, but... Ah well... They know who to go to for tlc and food though. Hmm, kids can go through that stage too? Just a funny thing I'm trying to work out that you hit on.

3 boys Doom, 3 boys. They are just as destructive as a bull in a china shop. :D or a lambs in the living room!

I think you need to even the score over there in the population. Oh, Hell... what's 3 more... girls.

I dunno. By now, I'd be hiding bottles.

Good idea banding him. He will keep his sweet personality. Hmmm..I wonder if it works with men? Would they keep their sweet personalities? He probably wont get large horns without his junk. Have fun with your house wether. LOL