I have never had second degree burns before, so this was a nice change. Once it heals, it is amazingly like having super glue stuck to your skin, or at least that's how your nerves start working in your fingertips after such an episode. Oh, you want the story do you? It does involve a bit of sailor blushing from my part. But let's just say I had a disagreement with some brush burning, a hollowed out metal pipe and condensation. Yet another one of my incidents. Maybe some day I'll get it right.

We are finally seeing rain here. Over the winter we managed to get enough rain, little snow, but enough rain to go from extreme drought to severe drought conditions. Yesterday it managed to rain all day, granting us over an inch of the wet stuff. Cool, wonderful, glorious, large white rain fell from the darkened skies and we still had to move a bale out to the fields for the cattle. I discovered that my face is like the incredible hulk, though husband says it's my second chin. But in the heavy rain we managed to get that bale rolled off the trailor into the back of the truck, with nary an accident. My face can lift 400 lbs by itself. Of course everything was flooding.

Husband has been working on the zombie moat, as the children and I have taken up calling it. Some of you remember my chatting about how we get everyone's flood waters on our land. 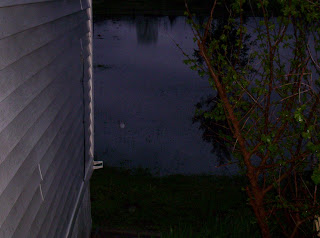 I know, the picture is a bit dark. But that's about an acre of land waist high under water. Husband and his new best friend the box blade, have been digging the zombie moat, and it seems to be working We already caught two zombies in it, a medium sized and a small one. ( pic is of the same general area in both photos)

I digress, turns out all the displacement of the missing soil causes the barn area to flood now. We still have a lot of work to do, figuring out how to displace all that water.

Speaking of cattle, we spent the summer feeding the cows a supplement to keep them from going off their feed in the extreme heat, then kept them on it through the winter to help with the warmth as the bales we had been finding were below par, until we found the milo. Now they are all spoiled brats and feel they are entitled to a treat every freakin time they see me. Urth and all the calves are really bad about it. So I have to retrain everyone. Treats are only for milking! Until they understand that, the neighbors are going to have to put up with the demanding mooing that can be heard 3 states over.
by Phelan at 7:27 AM

We usually get an anual washing out of the barn from spring flood, when the river breaks up. Not this yr. So I guess u got ours. Thanks for story, happy trenching to hubby.

Some water and a tractor to play with, what more could a man possibly want. Maybe a little mud wrestling with wife ? Enjoy the rain, it has been coming through here and heading straight for you all night and not supposed to quit for a while.

Nancy, I am fine getting your's, ontop of our normal spring rains. We really need it this year, more so then in years past.

Oh Bob, I would say don't put ideas in Husban's mind. But I already have been tackled in that mud. From what they are saying, looks like we are to get rain here for the next four days. Happy dance!

Looks like we are getting some of the overflow from your area! Nice amounts of rain here today, which sure beats the dry we had last year!

You should get a good hay crop this year!

Congrats on the rain. What a great Spring blessing. Hope you feel better soon and heal well. I love the moat. Hope it keeps water for later.

So that's what that sound coming from the west of me is! LOL I haven't went out and done a happy dance in the rain, yet. The neighbors think I'm weird enough as it is.

Kelly, Husband dragged until he hit clay. The ditch we dug last year help water through most of our summer. We do hope that it stays again. Husband wants to stock it with fish.

Judy, yes it is, and I am sorry. I try to stay we're they can't see me, but if I even sneeze. . .oh my! Neighbors can never think your weird enough. You must push there belief systems to the limit, then surprise them. It keeps life interesting.

Yesterday we had a mix of rain, snow, and sand. Basically, it was raining mud pies. O-o Weird weather seems to be the norm across the country this week!