How much support can one girl handle? No one wanted to help me prepare my first duck. Yet even with the threat of grease lulling about over head, Sunday night I roasted one of my ducks.

I invited my brother and his fiancé out for this feast {She really likes my green beans}. I looked through recipe books and homesteading books and no one agreed on the best way to roast a duck. I stared at the naked carcass, wondering what to do. One decision was simple, alcohol is not sold on Sundays here, so the wine port recipe was out and I had to go with a orange juice glaze.

Sometimes I wish that I had gone to culinary school, that way I would know what some of these fancy cooking utensils are actually called. I do not have a V-rack, but I did have an electric Dutch oven, with a rack. I placed the duck, breast side up into the Dutch oven, poured water up to the bottom of the rack, set the dial to steam and decided I had to go into town. I left instructions with my husband to check on the duck once in awhile to make sure that the water didn't completely evaporate. I was to stem the duck for 40 minutes, I figured it would take about 10 minutes for the steam to build up, I could be back just in time.

I went out to the car, with all of my children begging to come with. I got them all buckled in, and headed to town. I needed the ingredients for the glaze;

I made it home 2 hours later. My husband did as I asked, and there was water and grease at the bottom of the Dutch oven. I turned it off and removed the duck to allow it to cool. In the meantime I started the glaze. I mix all the ingredients into a small cast iron skillet, and brought it to a boil, reduced the heat to medium and watched it painstakingly reduce its liquid to 1/4 cup. The book says that this process takes 30 minutes, more like an hour.

While the glaze was reducing and thickening, I cut the duck into 6 pieces. 2 legs, 2 wings and 2 breasts. I placed them in a baking dish, and wondered about the skin. This recipe doesn’t say to remove the skin, yet all the homesteading books encourage you to do so. I took the duck pieces back out of the dish and removed the skin. {Doesn't that sound easy} Ducks make their own super glue and allow it to cure between their skin and muscle. Sometimes it is not completely dry, and you must try to grip the gel like substance without slipping. It wasn't an easy task. Chicken skin is much simpler to remove.

With the skin removed and the glaze still thickening and reducing, and put the duck pieces back into the dish and baked at 425f for 20 minutes. It was starting to brown, so pulled it out and poured the now thickened and reduced glaze over the meat, then returned it back into the oven, baking for a scant 5 minutes. While that was baking, I made biscuits, adding rosemary and oregano to the mix and placing a lump of cream cheese in the center of each one. Pulled the duck out, baked the biscuits.

As I was cutting the duck, I realized that I should have roasted both of them. There is little meat to a duck. But I had not wanted to ruin both of them on my first try. Biscuits done! I served everyone, and reminded them that this was the first time I had ever roasted duck, and to be sure that they were honest with me so that I never would force this on them again.

I was shocked! It was not greasy in the least. And it was actually tasty. I hadn't completely blown it. {Yes, that would be pride} My husband was the only one to complain, and that was because a duck is all dark meat, and he doesn't like dark meat {spoiled brat}.

I didn't get pictures of the roast duck, but I will leave you with dessert, homemade brownies . 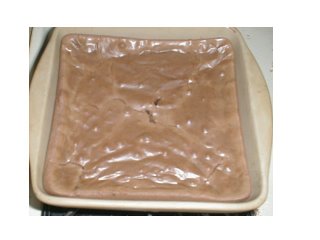 OMG. OMG. OMG. I LOOOOOVE roast duck! I've never tried to cook one but this sounds just awesome Phelan. Good on you for doing this, and the brownies look great too! Yer makin' me huuuungry....wish I'd been there for dinner!

That sounds gorgeous. I wish I had been there. When are you roasting your the next one?

getgoing, you sure you want to fly out to Kansas just for duck? ;)