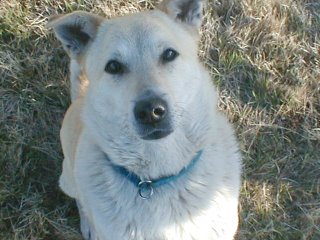 The picture above is our male dog, Link. He was 4 years old when we got him, and has been here for 4 years. Part collie, part husky, he has proved himself a loyal companion and a great country dog. It took time though. I overheard a co-worker saying that he was moving to California and he couldn't take his dog with him. He was going to put him in the pound. I offered to take him home without seeing him. Link grew up on a small city lot, in a not so nice part of the city. I pulled up to the home one afternoon, and when my co-worker brought him out my first thought was "He's going to get shot, he looks like a coyote." None the less, I took him home.

We discovered that Link didn't like men. He growled at my husband and would hide behind me. It took some time, and a lot of patience on my husband's part. But soon they became best friends. Link is a large dog, but insists that he is a lap dog. One of these days I will remember to get a picture of Link curled up on my husband's lap.

When Link first came out to live with us, we found that he enjoyed chasing cars. Not a thing that my neighbors liked. We tried different things to break him of the habit, but it took him chasing my husband on his motorcycle one day to finally do that, my husband {accidently} ran over him with the motorcycle. Link was fine, but lost his urge to chase us. He has also turned out to be a good watch dog and mole hunter. I have trenches in my fields from him digging them up. 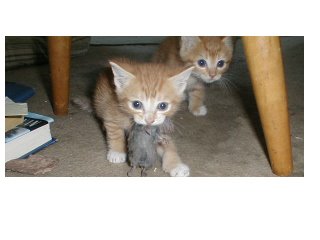 Kittens, we have kittens. They tend not to last very long out here though. I sad part of country living. It took only the first batch of little ones for us to realize why farmers have so many. Something else eats them. It's hard when you find them after a brutal fight, it's better when they simply disappear. As you can see, they are great mousers. That makes us more than just a little happy. Every time I turn on my oven, I catch one of those field mice on fire, it stinks the house up, but there is little I can do to prevent it. Maybe when we build our new house, I can start the preventative measures quickly. Right now though, we must suffer through it.

I got into an argument with a city person that informed me that she used live traps, and then would drive out into the country to let them go. Please don't do that. What happens to a city mouse in the country? They look for a house to invade. There is nothing humane about doing this, nothing. If the mouse can't find a house {call me Dr. Suess} then it starves to death or is eaten. If it does luck out and find a house, it gets eaten by a dog or cat, set on fire by the housewife, or it's neck snapped in a trap. Please keep your mice, I don't want them. 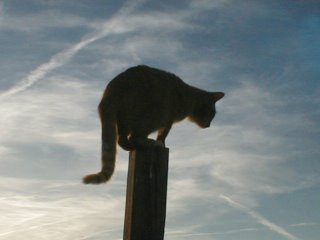 Owe, yes this cat's name is Owe. My 4 year old named her when he was 2. She scratched him as a kitten. She has turned out to be the best mouser, moler, gopherer, birder, we have had. Not so happy about the birds, and she did kill our pet rabbit, but she does bring me a headless rodent several times a day. She might just clean out the rodent population here shortly. 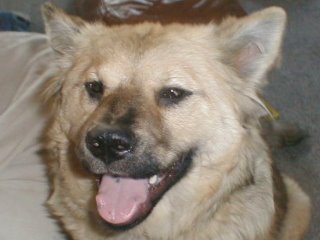 Diogee, say it slowly, and it is not French. D...O...G... She was named thus to help my youngest boys learn to spell. She is still a puppy and rather useless so far. Though she has learned how to dig moles up. The goats loath her, especially our female goat Trina. Whenever she is in the pen, Trina butts her. And the poor puppy is sent running and yipping. But she has to learn I don't want what happened between Link and Smoky to happen again. We know that Diogee's mom was a small black Lab, but Daddy's pedigree is unknown. She hates the heat, makes things a little tough on us.. 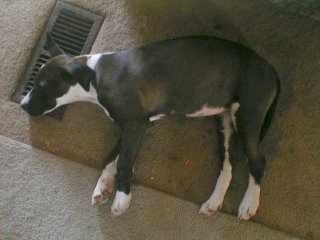 Our newest pup, Ya-Ya. Someone had dumped her, and I am a sucker. She is part pit bull, but we are not yet sure what else. She has a temper, but we will work with her on that. She has proven her worth though, as she likes to help me dig up weeds in the garden. And I could always use the help out there.
by Phelan at 9:36 AM

Email ThisBlogThis!Share to TwitterShare to FacebookShare to Pinterest
Labels: pets

It looks like you have a good crew of critters there!