Medium was 4 years old when I started this blog about our small acreage in rural Kansas. He is now 12 years old. 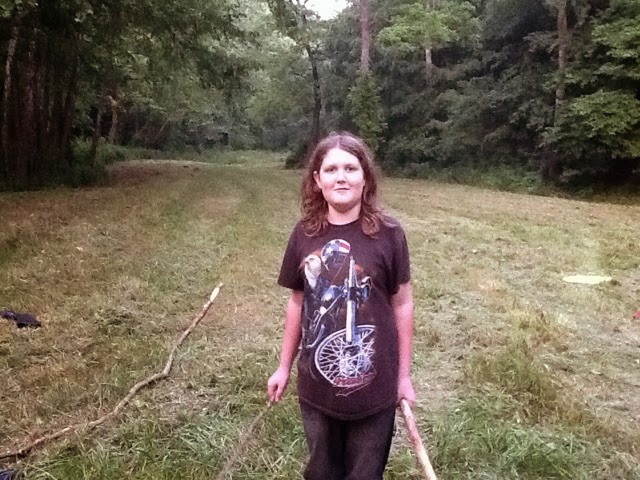 In Kansas, Medium was shy, and quiet. Except when it came to being at home and dealing with his brothers. But now, here in the Appalachians he has found his voice. And it is one of a clown.
No longer is he my self conscious shy fellow, he is now my outgoing, say anything for a laugh young man. Luckily no reports have come from the school about him being disruptive. He is even on his second girlfriend! The first broke up with him. I really didn't think he was going to be my ladies man. Boy was I wrong.
He is flourishing here. He is happy and outgoing. Even starting to turn in his homework. That was a big problem last year. He started off his school year doing the same, but after a conversation with one of the teachers, things have turned around.
He still finds any excuse he can to get out if doing chores. This has warn thin with the other boys. And when he does get around to doing it, it's rather half assedly. The other boys won't put up with it much longer. I have been patient. I know his brothers will eventually help him see the error of his ways. I find that some things are taken much seriously when it comes from your brother than a parent.
He got an iPod for his birthday. We have had some issues with him playing on it rather than doing ressponsible things. It has been taken away or not charged as punishment. That has gotten better.
I am happy that he is finally out of his shell, however it makes for some noisy nights.
by Phelan at 12:09 PM

They are all good kids, taking a different paths to growed uppediness.

We took my 13yr. old daughters IPod away and she who is normally funny and calm had a total meltdown. After looking at all her messages because we thought she was up to something, we realized she just loves her IPod, kids lol!

Glad Medium is enjoying life in the new place :)

It's always tough when your kids are growing up. They go through all sorts of traumas and phases. He is lucky he has a good mom who cares about him. A lot of kids don't.

At the age of twelve, now the real fun begins! I'm glad that he has started to come out of his shell!

Maybe things are starting to turn around a little, ya reckon?

My shy child turned out to be a social butterfly--the middle child.

The middles ones are the ones who are the surprises... (I'm a middle!) Glad he is thriving, and I wish I could tell you the "anything for a laugh" will slow down, but I'm married to one of those and he's 53 with no signs of being more "serious".