How to Butcher a Hog Part 2

Once in the garage, she needed to be hung, legs spread. 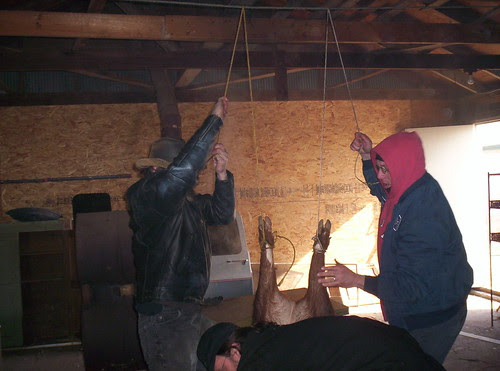 Everyone seems to need to get a hug in. 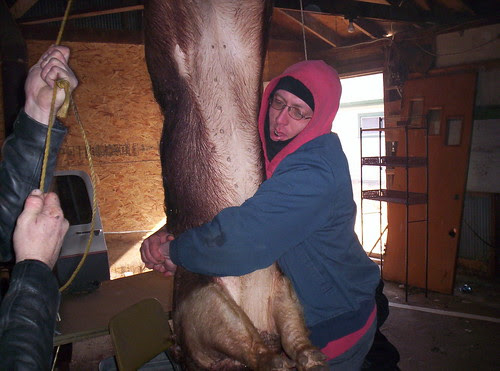 Once she was up we had to get the hair off. We choose to do the scald and skin method. 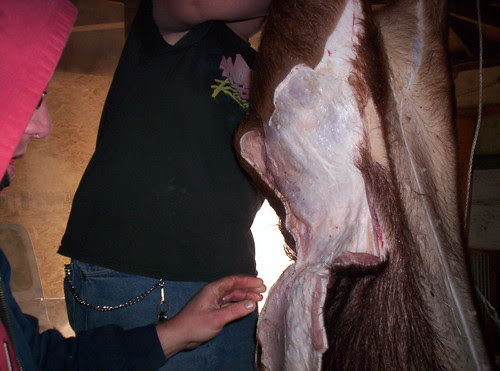 Cut into the skin, careful not to get the meat, and pull. 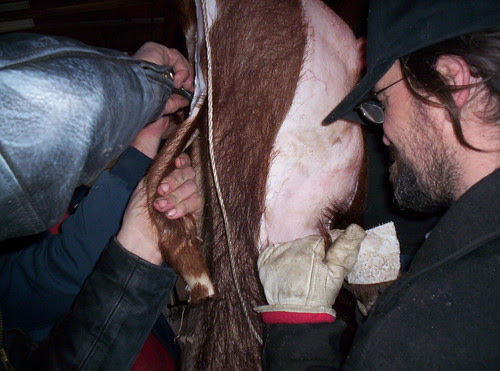 Most off it came off just fine, but the back was more difficult. I am not sure how long it took for all of us to do this, but it was a long, tedious task. 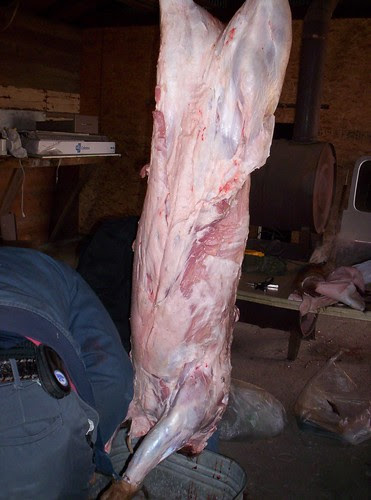 Once she is clean, cut down the middle, opening her up, but careful not to cut the intestines. 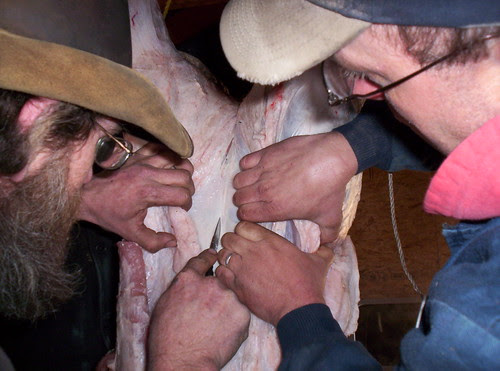 While the guys were opening her up, guess who got to cut around the anus? me! You guys are so smart. My husband says it is an art. Anus art, hhmmmm... ok. There were some giggles and PG rated comments about the genitals. This time we were working with a female, yet still ended up my job. There was some issues with calling it a vagina, and had the guys giggling like girls, we ended up calling it a whowho and a Vajayjay (isn't that the latest term, well it got us cracking up)

With her opened up, and the intestines tied off in a neat little bow, it was time to pull the insides out. 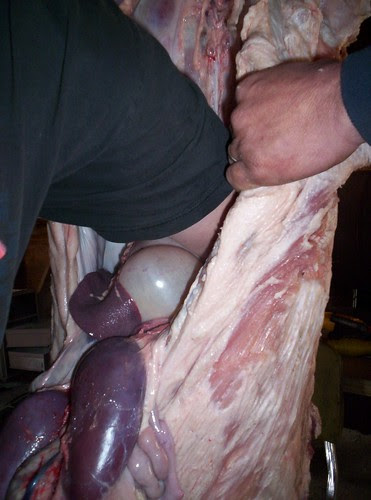 That would be me up past my elbow in pig. It was very hot in there. Melissa's son reached in and agreed that it was so hot it burned. Doesn't help that hands are cold, but still. . . Everything was removed, and the lungs were passed around. Very cool feeling. My husband gave an anatomy lesson to the children that decided to be present.

Once she is empty, is is time to break her down. We had to break it down to transport in a car trunk. 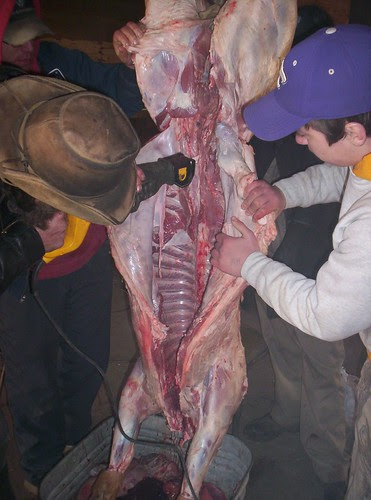 Cutting down the middle like this halves your pork chops. That's ok. 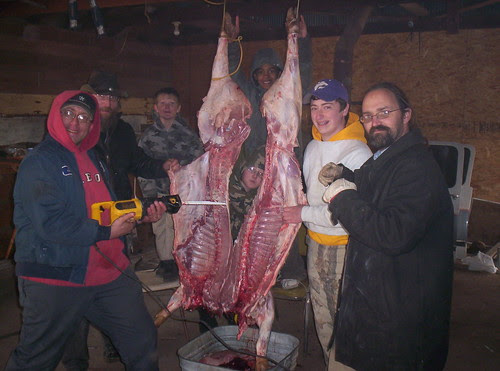 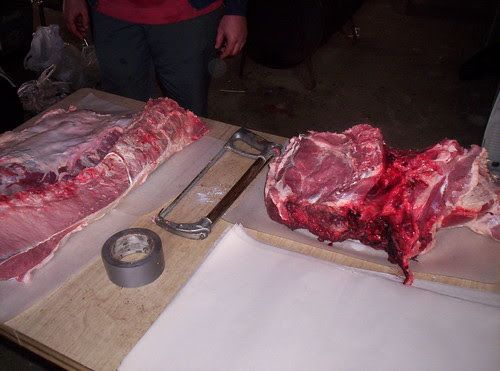 We cut and packaged and brought it home. The entire thing, including trip, took us 8 hours.

Email ThisBlogThis!Share to TwitterShare to FacebookShare to Pinterest
Labels: pig

The reciprocating saw really helps doesn't it? It looks good. The next time you do it you will be faster. I promise. I think I would use a bigger caliber when I go for the goat...

I'm LOVING this series phelan, thanks for sharing! :)

We have been given a hog by our neighbor on the backside of our house.My husband did all this when he was a kid,so I will at least have someone who knows what he is doing leading,lol.

Man oh man, we were NOT brave enough to attempt this. Good for you.

I don't think I'd have a hard time skinning and cleaning, but the killing part....ugh.

Tim, yes I so love our Saws All, and it does live up to it's name. Bigger gun next time.

Farm mom, that you for reading.

Tonya, beware of men that claim to have done deeds as boys, they tend to forget they forgot until the moment the memory is needed ;) Good luck!

April, it took us a long while to work up to all this. 7 years now at homesteading. Killing sucks, but the rest is easier.

Anus art...There was some issues with calling it a vagina...whowho and a Vajayjay (

You're gonna get some weird hits off google for those lines.


When I was in EMT school the instructor brought in a set of pig lungs still attached to the trachea so we could see how the lungs inflate when you use the BVM to oxygenate someone. The reason she chose pig lungs/trachea is because they are closest to human lungs and trachea.

I'm confused. I thought you scalded and scraped OR skinned, not scalded and skinned. What was the point of the scald?

Really enjoying the series, Phelan. Glad you're allowing the kids to participate. When I was small I was babysat on a farm and one weekend when they had me they butchered a cow and would not allow me to watch because they thought it would give me nightmares. Even put the next oldest kid in charge of me to keep me inside all damned day!

Wow! This is so great with all the photos and real-life reactions. All carnivores should check it out. Thanks for taking such care to educate us.

Son just can't stop talking about pig day. I think I'd be okay with it, once the pig was down. What was the total weight of what you butchered? I looked in the cookbook for the butcher page... did you do just ribs, chops, bacon, ham and roasts? I'm sure you've got more to come... I'll be patient. :)

I am still laughing about the body parts, what a great anatomy lesson. Too bad more kids didn't have a clue where their meat came from. Well done Phelan!

I recently helped a guy from my church butcher a hog. He used a 12-gauge with #5 bird-shot right between the eyes to kill it, then cut the head off right after we hung it. THe bird-shot will kill it instantly and is to weak to do any damage if it even goes all the way thru the head. I thought it worked well.

I feel like a perv saying this, but do you have any photos from when you cut the anus?

We're getting prepared to move to our baby farm, so I've been reading all I can find about the processes we'll encounter. Nothing gives any more information on this subject beyond "cut and tie off". I know it sounds like a straight forward kind of thing, but when I finally get into the situation I really don't want to do it wrong and contaminate the meat.

Arctic Gypsy, ha! Pictures are not the perverse part, it is being the one with your finger in its anus! I a not sure I do, however if you look at the goat butcher post, there is a photo of it being done. It is the same process with a hog.

I'm sure since a year has passed you have perfected your approach, but just some comments for others reading this now ;) The .22 caliber is not meant to kill the hog, but rather to stun the hog, hopefully dropping the hog, while you nip the neck to let it bleed out. Using a larger caliber can be dangerous. The hog being alive helps the bleeding process. I've heard of old timers not even using the .22, but rather nipping the neck as they walked the hog to the gallows, timing it perfectly. Crazy, right? You may consider a gallows (kind of like a tripod) when lifting and moving the hog. Makes it much easier IMO.

Great article Phelan! I am going to whack 3 small pigs this weekend, and this information was a big help. I think I'll use my Featherman chicken scalder to do the pig skin - same temperature for chicken plucking and pigs I see :-) I am going to use a .22 Cal with hollow-points. This has worked well for me with young goats, so I don't think a pig should be much more trouble. If you tap a goat in the base of the skull, just above the neck, with the pistol muzzle pressing against the head (aim for the nose), they go down on the first shot.