As odd as the mimosa leaves strung out across my driveway was, it pales in comparison to what happened next. 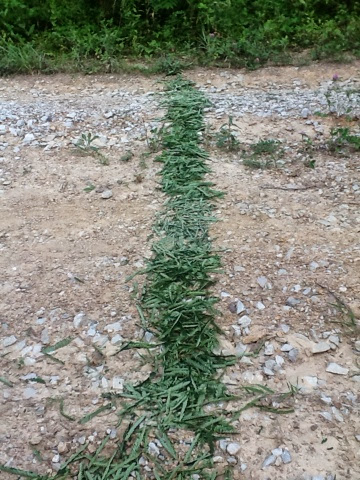 Just about every night we hear rocks being dropped or smashed together. The only time it happens is during a new moon, or very cloudy night where little moon light can penatrate the dense canopy of trees along the Creek Styx. (Those new, this is what the boys have named our creek).
I figured it was just raccoons, breaking open food items on the rocks. Our dogs have grown use to it, so no longer bother to acknowledge the noise with bursts of nervous barks like the once did. They ignore it and go no where near the area the sound emanates from.  However, if the dead leaves or the underbrush is disturbed closer to the house, they quickly become alert, and very protective, as per their job description states. We insist they sign a contract before allowing them room and board.
One night the sounds of dropping rocks woke me. It was very loud, and didn't sound like small, easily raccooned moved rocks. But I am a neophyte, a babe in the woods, so what do I really know? The next day, Large and Small were out and came back with a tale of cairns being built in the stream, near the abandoned bus. 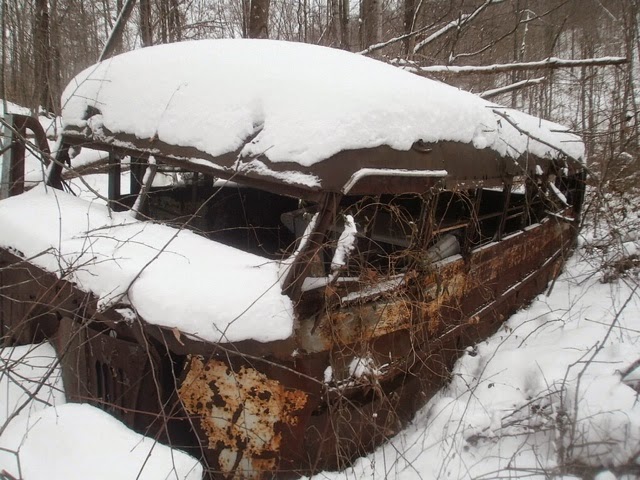 I am stubborn in my refusal to go near this during the warm months, citing rats and snakes.
Large informed me of two different stacked rocks. My boys have been known to fib, luckily Small is horrible at it, and I knew that the pillar of rocks were indeed there, and that neither child had built them.
The first one is easy to explain, if I had any rushing water the last few days. 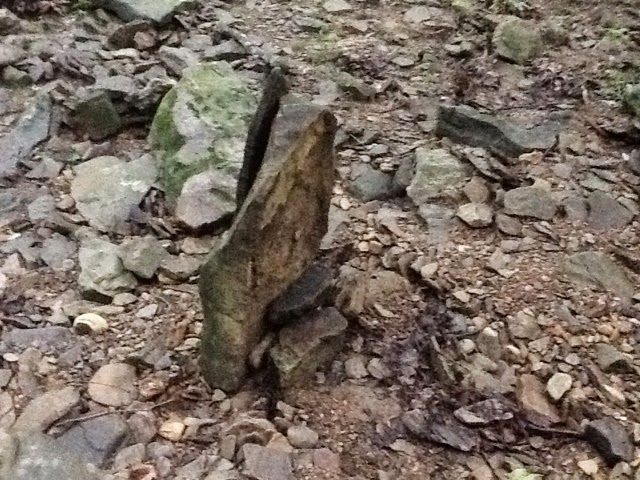 However the second stands over 4ft, and the bottom rock is hefty. Husband says easily 100lbs, too much for one child to lift on his own. 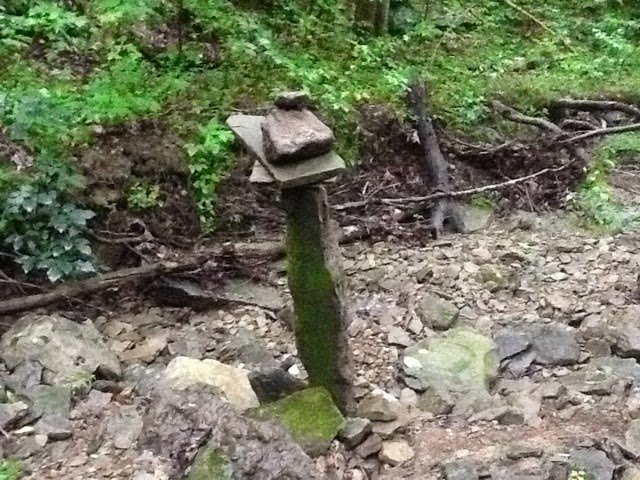 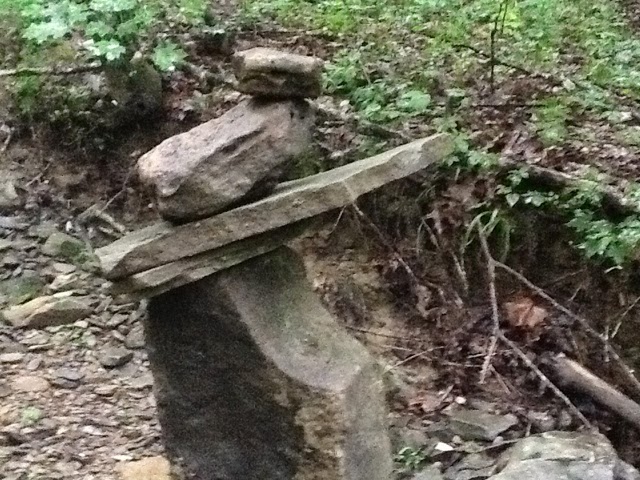 I know a few things about cairns. I also know that hikers will stack rocks to mark trails or danger. However this one is too tall for traditional trail marking. Plus they would have had to go through barbed-wire fencing to erect it.
Now there are a few theories.
1) stowaway stoner creating a fairy land
2) we have our own Blair Witch
3) Bigfoot
4) someone is getting a kick out of messing with us.
Now I do not know a lot about Appalachian folklore, and the role of cairns in it. I tried looking it up, but so far have found nothing.
Things have been interesting, fun and a bit creepy. If someone is trying to scare us off, they will have to try a tad harder.
by Phelan at 10:09 AM

At this point, my darling rat, it wouldn't surprise me. Besides, Bigfoot is known to stack rocks.

Humm... As soon as I get the time to do so, I'm still going come out and do some recon lol

Judy, it is possible.

Full moon would tell me wiccans, witch wannabees, Devil worshippers, someone with an agenda that does not involve you unless they are trying incantations to drive you out. I think if someone were trying to frighten you, they would not be stacking rocks. Those are interesting looking.

Do you think the local teenagers are playing games?

A UFO stopped for a pit stop and forgot and left grandma. Just trying to build a crude marker so they can find her if and when they realize she is missing!!

Great, give me something else to fret on John!

In West Texas we call those "Wet Trails". People that crossover the border under the cover of night use stacks just like that as a sort of bread crumb trail. Here it's a simple marking system for the trails for the others following. Given your location in the middle of the US, I'm sure its just Bigfoot... or me. Which some would say are one in the same. ;-)

I love your life. You should change your name to Ms Adventure. Thanks for all you share.

I showed my husband your post regarding the rocks and leaves, he instantly said Indians. Do you live near any tribes?