Hope you had a good Easter weekend.
Ours was of course sparse. No egg hunt, but I did managed to round up a bit of candy for the boys. We cooked outside as it is now that time of year. But before an early dinner, we worked the garden.
Husband and I spent hours working the soil with a hand cultivator and our hands. We might have gotten a third of it cleaned up. Still not ready to plant anything in it yet, but it is getting closer. My hand's still hurt this morning.
My heart is heavy this morning, but I need to wait until things come to completion before I write them down.
I digress, after our sun burns took on lives of their own, Husband and I settled down along the Styx Creek and watched Medium and Small feed the minnows. We laughed as we watched the fish grab worms, lager than themselves, and then behave like chickens. One would "run" while a horde would chase behind. Suddenly something twice the size of the largest minnow (largest minnow would be about three finger wide and 6" long) came shooting out from under the small waterfall, stealing the worm and disappearing under the leaves. I have tried looking it up, but can't seem to describe it well enough for the search engine. I though a catfish at first, it was blue, with two white spikes on either side of it's face, yet it's mouth wasn't as flat as typical catfish. We seem to have found two of them in the Creek Styx. 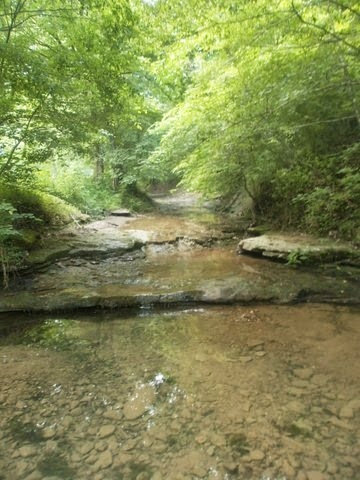 (Last year's photo)
Husband got the fire going, and. I set about dinner. With no breeze to cool our sunburns, the fire quickly got me in a not so pleasant mood, yet dinner was bueatifully done. Husband quickly fashioned an oven over top so that I could bake a cake. The oven work well too well. The cake was done in five minutes, and I checked it at ten. Aw well the chared part peeled right off. The cake was a bit flat as it didn't have much time to rise. Still yummy, and the boys gobbled it up.
Sleep came as a blessing. I was so exhausted. Having not done much manual labor in the year and a half since the wreck, this has been trying. My knee is stiff today, but not worse for wear. We are in the shop this morning, though technically closed on Mondays, Husband scheduled a motorcycle in and we have two to send home.
I am grateful things have picked up, but it has come too late.
by Phelan at 8:50 AM

Your post sounds a bit ominous! Let us know if you need anything.

I have no idea what kind of fish that was in the stream. It would be interesting to find out.

A sunburn in front of an open fire sounds painful. This makes me want to fire up my grill.

I don't suppose there is any way to ruin a cake if you can get the scorch off.

You're in my thoughts.