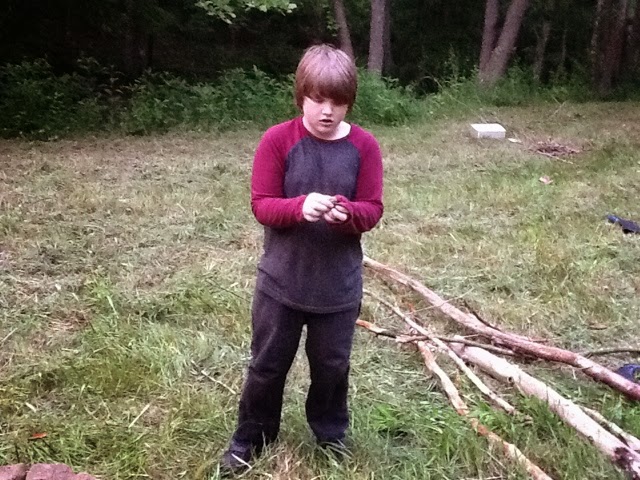 Many of you have watched him grow up here on this blog. He was 2 years old the first time I wrote here. He will 10 come Janurary.
I am concerned about my youngest. Here they do not give extra or special help to those without a low I.Q.  They tested him as I requested and as the State of Kansas requested. He suffers with a short term memory recall issue. And it make learning new things, like math skills, a bit more difficult. He needs extra time, and has to have the new information gone over with him multiple times. In Kansas, they were teaching him how to work around the issue, to create news ways for him to recall the information. That has stopped here. Husband and I are working with him, I do not want him to fall behind.
The first week of school was the hardest for him. He had never been in trouble before, and suddenly it seemed that everything he was doing was causing him to miss parts of recess in a timeout. Most of it was due to his memory recall issue and the fact that we had no clue what the school wanted from us. I got some of that worked out, but not before Small gave up. He no longer cares if he gets in trouble. It bothers him a bit that he has missed every fun Friday since we started school here though. I had hoped to resolve things before he gave up, but I couldn't.
The Principal however has been trying to work with me on other aspects of his school life. His hands are tied with the special needs, and tutoring will be available after Christmas Break. It is not called winter break here. Honestly doesn't bother me either way. Because of Small's shyness I had him enrolled in their after school program. They get one hour of homework time and one hour of physical game time. Small LOVES dodge ball. Yes, they play it here in all it's painful glory. Small thrives during that time. Because of the drought and the high temperatures back in Kansas, I just couldn't send them outside to play. Then the wreck happened, and I was unable to get the boys to go out to play. Small gained weight due to his father's cooking and lack of physical activity. He has been very self conscious about it. He is a very tall boy for his age, and then the weight, it made him feel awkward. But dodge ball has helped him shed those pounds, helped him find some friends, and he is always picked first for teams because he is that good at it.
He still loathes school, but the after school program brings him joy. He is finally excited to tell me about what is happening during his day. He laughs a bit more, he chats with me and his brothers more often. He is slowly coming out of his shell. Kentucky may not be his favorite place right now, but he is starting to find his joy, and that's all I really want for him.
Small loves Banshee Holler though. It is indeed a boys paradise down here. He knows full well were he will be building his tree fort, and bridges, this summer. He is thrilled with sledding, as he was the one to find a spot without trees, however it has a few butt hurting rocks. Last spring the weird insects and the small reptiles he would catch gave him hours of happiness. I just wish it translated to school hours a bit better. But it will come. I foresee next school year to be better for him, and his Debbie Downer attitude.
by Phelan at 9:30 AM

Glad he is finding something to bring him some joy! Our kids too seem to be still adjusting to our changes. Change is hard, at any age. Thinking of you all!

Sorry to hear that Small is having trouble with school. My middle child had a learning disability. The Florida schools were great. Small should have a IEP (individual educational plan). Be sure you are active in its creation and insist that he get the help he needs. My son grew up to become an US Marine and I could not be prouder.

The after school program seems to be a God-send for Small. I just wish the school offered more to help him along.

Small has had many changes, he will come around.

Small will find his own way and do good, just wait and see. He's a bright and smart young man, he'll get there. Our grandson is living with us and last year he had about the same year in school as Small is having now, but things have finally got better, I didn't know if I was going to make it...you know how us moms and grandmas are!!
Haven't heard anything about your mom in a long time, how's she doing, is she living on the farm? Always good to see you have posted.

HI,
Long time lurker here, but I wanted to say I am in a similar boat with you.
We just found our new urban 'stead, and have moved in in order to be closer to my partner's son. He has been having troubles in school as well. From grades dropping drastically to 'hitting' and being 'hit', and all around introvert behavior.
He has always been a shy guy but things have been tough and I guess he reverted.
What I wanted to share is our small triumph this week of finally breaking through that shell and we can see him emerging into the amazing young man that he is inside.
Lots of hard work and tears (for me) and a lot more work down the road. But I can tell you love your guys as much as I love mine, as hard as it all seems I just keep telling myself "this too will pass".
I also wanted to let you know that even though I usually lurk, you and your blog have helped me to keep on going. So I wanted to let you know you are not alone and thank you for sharing with us!
Niki
(sorry for the ramble!)

Thanks for the update; I still see Small as the little boy with the big chicken!

I will be praying for Small and for all of you.

Sorry to hear he's having trouble in school. We had a similar problem with the youngest of my 3 sons. He was finally diagnosed with ADD. Not the hyperactive kind, the inattentive kind. We tried the meds, but they made him crash with fatigue by the end of the school day and he eventually stopped taking them in HS. He said he found that drinking a cup of coffee helped him, believe it or not. Apparently with ADD kids, the caffeine has the opposite effect and calms them down and helps them focus, or so we were told. School was a struggle, but we were lucky that our state has strict laws about giving help to kids who have been diagnosed with a learning issue. It got him most of the way through high school before he dropped out and got his GED. As you know, as the parent, you just have to be on top of it every minute. I used to joke that sometimes it was like having a teenage toddler in the house.

Small has you for an allay. For some reason without having ever met you in real life, I trust that you will help him through this time. I believe he will find his way in time and with you as his advocate that will be sooner than later. Karma is Karma.