My heart breaks for her and her family today.

I am sitting here, in the cold, reading her post about her darling Finn. Knowing full well that I should not complain about my life circumstances here today. What I can do is reach out in love and understanding.

My long time readers know about my first son, not Large, but my bulldog of a baby, Getty. He would have been 17 years old this year. And I know first hand that there is not a damn thing you can say or do to ease the pain of the choice you are faced with. I have not been so good at commenting lately, but I read, and I have been pulling for Little Finn from day one. No one should ever have to face the decision I did in this modern medical age.


"He said it was time. They placed him in my arms, not yet even 2 lbs, and pulled the tubes out from his throat. The tubes that kept him breathing, tubes that had been our only hope. But it was time. I grew tired of watching him, tired of not sleeping, tired of the worry, tired of him coming so close to death. His eyes opened as they removed the plastic tubes. This would be the second time I ever saw his eyes. So blue, like mine, almost black in their intensity. No one would have faulted me for crying, but I didn't. I marveled in his eyes for that second. They were mine, they were saying goodbye.

I rocked him like a good mother would, when a child is hurt. I touched the tip of his nose with a gentle finger. I kissed his forehead and whispered his name, Getty. His last breath was taken while cuddled close to my chest, where he could hear my heart beat once more. It's the sound he heard when he began, and the sound he heard when he ended. My son died, and I waited to weep."

I wrote that several years ago as I watched my Father die. My son was preterm, he survived a month. I can't help but weep now, not just for my son and the pain it still holds, but for Mystic Mud and her family, and for Finn.

Many of us have had to face the death of a child, and it is more painful, emotionally, than any other death we have encountered. There is no solace in words, most the time we barely even hear them being muttered.

To Finn and Getty, may they be the best of playmates. 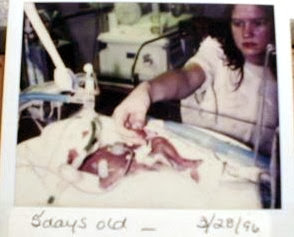 What a beautiful commemoration for Finn and Getty.

Much love to all of you.

I'm sorry that happened to you. My wife lost a baby while I was at sea and she was living in a foreign country. We never think about it.

Oh, my sweet girl, this is not a burden I would want to share with another. I wish Finn was the only one. It is so unfair to see a little life that you created and want so badly but can't have. I bet that when Finn gets there that Getty will be waiting for him and show him the shortest way to the creek and the best spot for the biggest fish. They can talk as they walk and the mud swishes between their bare toes.

So much love to you, and thank you for this.

Ah, that was heart-wrenching. Now, I am crying again. Your baby is so tiny in the picture. I just cannot imagine how you felt and how Michelle feels. I am so sorry.

Your story made me bawl. I had been holding in my cry for Finn all night. It flowed after reading this. I can't even imagine what you and Michelle have gone through. Peace, love, and comfort to your family this holiday season.

What happened to mystic mud on facebook and the blog. It's gone (7/1/15) Does anyone know?