I drive the boys out of the holler every morning, except weekends, to wait for the bus. It's very dark. And now the sun is rising later and later. I have gotten use to the driveway. But remember how I felt the first time I saw it. And then seen it in the dark! 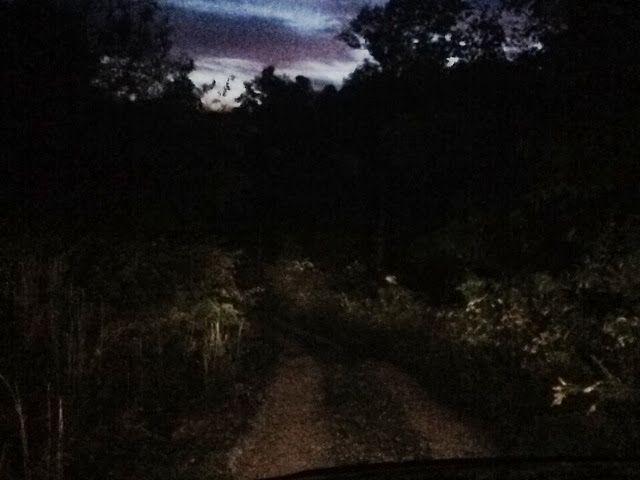 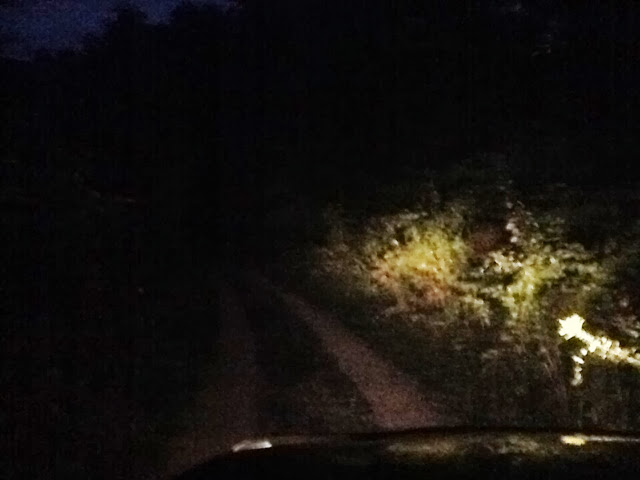 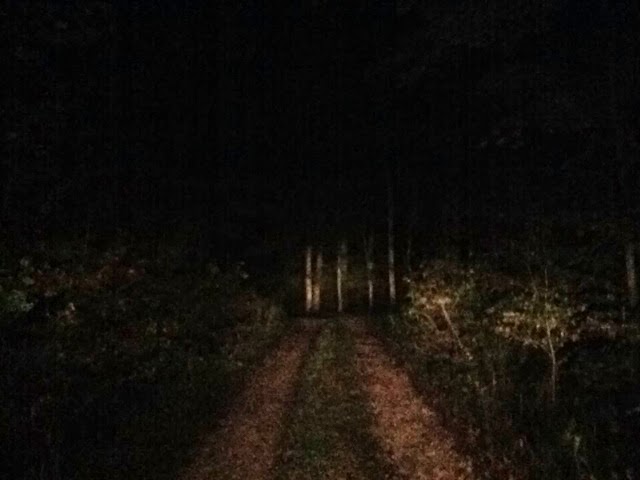 Looks like you have three choices here, into the hill, off a ridge or into trees. Icey conditions bother me a bit, as you have to ride your brakes on good days, and there are several good turns in it. We plan on moving some of the downed dead logs to the fall off the ridge side of the drive. So at least we will be stopped a bit sooner and lessen the chances that I will go cereening, and screaming off a cliff 75 to 100 ft down, depending on where I decide to exit the driveway.
It's also very very damp down here. Salt even clumps up. The cracker trick doesn't work, as the saltine becomes soggy as soon as the package is opened. The dampness is making it hard on me to burn. I have now become an expert at stick pyramid building. I hope that someday I will make the olylimpic team.
The leaves I have been gathering, have come for the downed trees. It's getting rather chilly here, and I want my fall garden to have a chance since I was several weeks late on planting. I realize that soon thousands upon thousands of leaves will descend, possibly smothering to death all those that I hold dear.  I am use to the leaves changing colors just as the temperature drops. Here, most is still green, and not dropping. So I gather to tuck in my cool weather veggies.
Everything that I have planted has come up. Hopefully the first hard, killing frost is at least a month out. Cool weather veggies can handle a light frost. It actually makes some of them taste better, sweeter. But a hard frost is indeed a killing frost. However the pervious owner left a bunch of plastic, a huge roll of it. So I can at least cover the crops if need be to keep the frost off.
I will try not to talk about the motorcycle shop too often here. If you are curious about that part of our life, I will have a Facebook link on Oct 1st, where you can follow that progress. The shop will be a huge part of my life. If I could spend the next year, or five, doing nothing but making this homestead perfect, I would. However our money is getting low, and we have to make a living. Homesteading, writing and motorcycles is what we know, what we have done for years, and motorcycles bring in the most steady of incomes. Though I will admit opening a shop at the end of riding season terrifies me.
Medium, Small and I made banana bread last night. I forgot the baking soda! Luckily it still turned out very good. A bit dense, but yummy.
Ms. Buckets arthritis seems to have settled deep into her hip. The poor girl is surrounded by sticks, yet unable to play fetch. She just doesn't go outside unless she has too. I know it's the dampness, and she is healthy otherwise. We knew it was coming, she is at her life expectancy age. We just keep her as comfortable as we can. She seems content to be a lay about dog now. 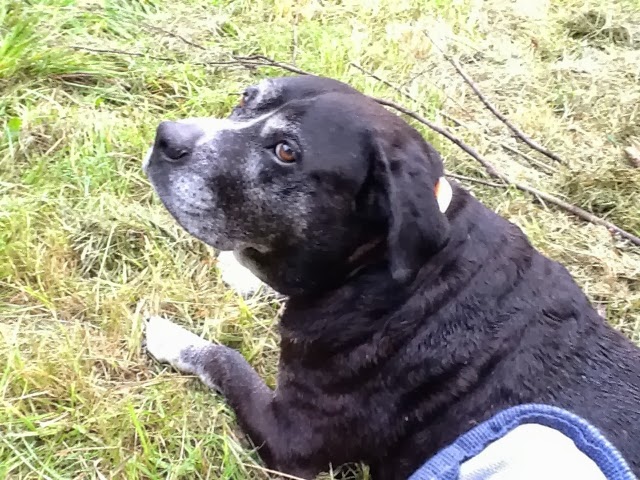 The puppies are in heaven, well in the day time. Night comes and they lose their minds. Terrified of anything that makes a noise. Took Betty a few times to realize that planes were not coming down the driveway. Sprocket has taken up guard at the wash and barks at the deer moving through the brush all night long. I have to bring her in just to get some sleep sometimes. Of course my mother telling me to beware the hillbillies when I was a kid, camping, doesn't help things. Thanks mom!
So far the only wildlife I have seen are deer, a black snake 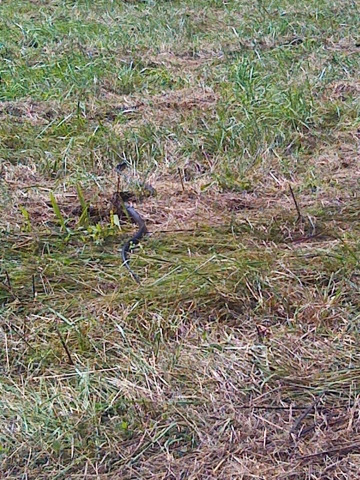 and a squirrel with a major "mine" attitude. Haven't seen any evidence of face eating raccoons, badgers, or bobcats. We have heard red foxes and a female coyote, but she moved on weeks ago. They roam here, unlike Kansas where they tend to have a set den. And there're in smaller packs here. Not sure if that's a good thing or not. Less to deal with, but harder to find. And yes, we have seen evidence of Sasquatch as one of my readers suggested. I will have to get pictures and show you. But I have to brave the hill again. Oh, did I not tell you? Husband and I climbed up the hill behind our house to the pecan grove. It was hard on my knee on the way up, down was just plain scary but not painful.
The sun is up now. So I guess I will let you go, I need to go build more stick pyramids.
My morning drive to get gas. 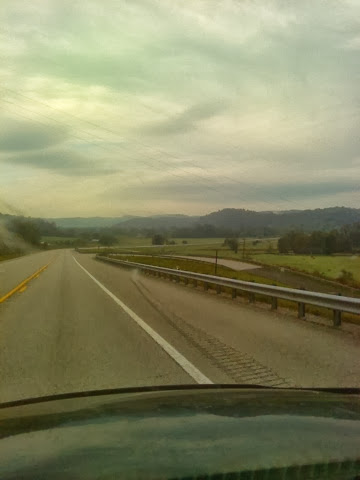 I knew Sasquatch was real!!!!!

Stay safe on that driveway, seems a bit treacherous.

My heart goes out to you all. You have so much going on and winter is lurking just over the hill. I'm passionate about givingour animals the bet care available, so if you can swing the expense, Cetyl M is an amazing product for arthritis. I've used it for old horses and old dogs with amazing results. My oldest horse could barely walk on his way to the pasture each morning, but with Cetyl M, he would lope and buck again! JF

I worked for a Mom-n-Pop front end shop for several years, she did the office & he turned wrenches. During the slow times she had another job.
He NEVER spent a dime he didn't have to. Never. It was a good lesson

We live on the east side of the Blueridge mtns and most of our greens made it through the first of the year last winter. They do taste better, nothing like kale that has been through a few frosts. It just changes the look and taste of greens to get real cold.

I have racoons and possums come up on my porch at night to eat the left over cat food. They're good guests and have never caused me a problem. I know people say they can get rabies but I have lived here 30 years and never heard of a case of rabies in this county. Hillbillies aren't bad people at all, though they get a lot of bad press in horror movies. In my experience, they may be uneducated but they have good hearts.

You DO have to watch out for hillbillies. Some of us only come down the hill at night.

Plus driving on icy hills is about the only time I don't like living someplace with so many hills. Where I live once you come off the hill I live on to the main road you have to make a 90 degree turn to go down the hill of the main road. At the bottom you make another turn or go in the water because there is no guardrail. Setting some of your deadfall in the ground to stop your slide this winter to use as a guardrail is a great idea.

I know how the dog feels. I am becoming a layabout and happy to do so. It is not arthritis, just back and knee damage. Your driveway scares me, and I don't even have to drive on it!

Glucosamine Chondroitin with MSM was developed for race horses. Maybe it will help your dog.

I really would like to hear about the shop, but following it on fb probably won't happen. I don't follow anything on fb. So, if you say anything about it here, I won't be bored.

Seriously, I don't want to live in a world where Sasquatch isn't real.

You'll get used to the mountain roads. The good news on getting to the bus stop on icy mornings is that you probably won't have to. Around here (western NC), the schools shut when the roads are even a bit icy because they don't want to put the school buses at any risk. And forget about driving in snow--for sure our schools close.

Try rice in your salt shaker. That generally helps with clumpy salt shakers.