Guest Post ~ Can I keep Chickens in My Backyard? 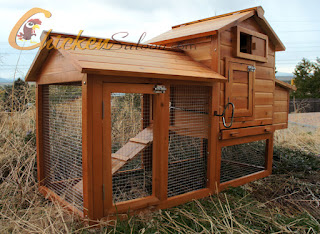 by Nate Smith
If you have made the decision that you would like to try your hand at keeping some chickens in your backyard, there are a few considerations that you might want to make first, and although you have probably thought of some of these, there just might be a few that might come as a surprise.


Probably the very first question you should ask yourself about raising chickens is, can I raise chickens in my backyard?’ You know, legally. I know, I know. If you are slightly stubborn like I tend to be you are probably saying to yourself, ‘this is my property, so surely I can do whatever I want on it’! Am I right? If that thought crossed your mind, or anything at all along those lines, trust me, I know where you’re coming from. Here’s the deal.

If you live within the boundaries of a city as most (but not all) of us do, you will want to start out by getting info on whether or not you can even keep chickens in your backyard while staying within the confines of the law. The last thing you want to do is to build or buy a chicken coop, purchase a few starter hens, buy some food, get the entire family excited about the adventure that lies ahead, only to have a bureaucrat pay you a visit and let you know (kindly or otherwise), that what you are doing against a city ordinance and that not only will you have to get rid of your new chicks, you will also have to pony up for a fine they’ve decided to hand you. What a slap in the face!

Basic Types of Zoning and Chickens


There are a few different types of zoning that exist, each one having different laws and regulations on what you will and what you will not be able to do. If your property happens to be zoned as agricultural, then you probably won’t have any problem raising chickens or constructing any type of chicken coop you might want to have. Most people reading this article will not fit that description however, and will live on property that is probably zoned as residential. Don’t let that discourage you in regards to chicken-raising, as many, many residential areas will allow people to raise a few chickens on their property. The best thing that you can do to make sure is to contact your city offices and simply ask them if there are any ordinances on raising chickens in your backyard, and what they are. You will find typically that there are two different areas of laws that will affect what you are able to do. First, there are often laws specific to the actual birds. How many birds you are able to have on your property (it might depend on the size of your property), what sex they can be (roosters, anyone?), and in some cases, although not extremely common, you might even have to get written permission from your neighbors! I know, that last one sounds a bit strange. You haven’t burned any bridges there, have you? The second set of laws have to do with the type of housing you use for your chickens. How large can your chicken coop be? Do you have to get a permit to build or even own a chicken coop in your backyard? Will this chicken coop need to be inspected?

I hope I haven’t scared you away from the idea of even wanting to start raising chickens in your backyard, and honestly I believe I have found some of the more extreme laws that you might want to, as your own city ordinance might include anything from having nearly no regulations at all, to maybe just one or two of these issues, which might not seem like much of a problem at all. Remember, as you are going into this and inquiring about the local laws of your city just remember that joy of fresh eggs, chickens and the family experience is all very much worth it in the end!


It has been a number years now that raising chickens in your backyard has been allowed here in my city. In regards to how many chickens can be kept here, a person can keep up to 12 chickens, depending on the size of your property. Anywhere from house lots as small as 5,000 square feet keeping just two chickens, up to larger lots being allowed 12. There was a small public hearing where people were able to voice their opinions on the matter. For the most part it was thought that people being able to raise chickens in their backyard was fine, and that there wasn’t really any detriment at all.

Even public officials mentioned that when it came to complaints about chickens from neighbors (which were extremely rare as it is), the complaints were never about noise, and never about a smell (neither of those things seemed to be any problem at all). The only complaints on file were for the occasional chicken getting loose, which was always promptly gathered and put back in its place. I’m sure we can all point to that neighbor of ours that would be the first to complain about the slightest inconvenience, or really anything at all.
Whatever the case may be where you live, make sure you have it on good authority that you are able to keep chickens before going out and finding chicks and a chicken coop. Don’t take the advice of a friend or a neighbor or a real estate agent even someone near you that might be raising chickens. Sometimes when laws are passed that ban certain things, those who were practicing before the law came into effect are exempt from the new law; they are grandfathered in.

What if My City Does Not Allow Backyard Chickens?


If you find that your municipality does not allow raising chickens, don’t panic just yet. All might not be lost. The process of getting a simple law like this changed is often times much more simple than you might think. You might be asked to attend a city council meeting to state your case, and often times that will be enough for the city to take a vote on the issue, and I think often times you will find that no one wants to be the lone councilman putting their foot down on people wanting to become more self-sustaining. Be patient on the matter as this process doesn’t usually happen overnight. It can takes months for the ball to get rolling, but you can be a part of making great changes in your area if you stick with it. If you can find others in your area that back you on this issue and will be willing to work with you, even better.

Nate Smith has been homesteading and dealing with backyard chickens for a number of years. He encourages people who are looking to begin raising chickens to gather information first on the best breeds of chickens, types of chicken coops and requirements that go into raising backyard chickens.
by Phelan at 8:59 PM

Email ThisBlogThis!Share to TwitterShare to FacebookShare to Pinterest
Labels: chickens

In my case, I can probably keep chicken in my backyard but it should be limited in number only :-)