Just felt like saying it, I haven't used that line before. It has to be much better then the post title of "Then we slice and dice and carve in pretty pictures" or "some day we will take the body parts and place them on the wall" (I wonder how many of you would dare click on those titles)
Large had a wax works project at school last night, he was John Brown.
We worked on turning his hair white. It didn't work out as well as we had hoped. Using baking soda and enough peroxide to make a paste, we painted it on. 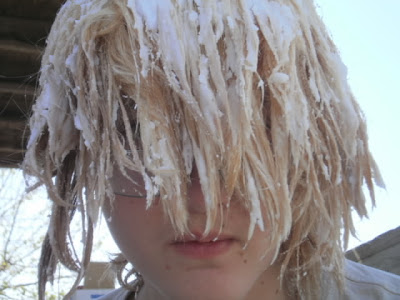 They don't mention how messy it is. 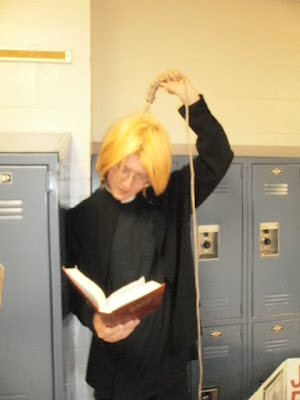 Here is is being John Brown. He did well. There were about 200 students doing the wax works. They had little green stickers on their hands. You would walk up and push the button and they would tell you about their historical figures life. One of Large's friends was Marco Polo, he resisted the urge to show in a bathing suit and blind fold. One of his male friends was Princess Diana. He was very pretty.
We have a couple tons of mulch sitting in the yard. We agreed to allow a tree service company to park their truck in our yard for a couple days while they were in the area, and in return they dump their mulch here. Wonderful! I love free mulch.
I got hit on by a 15 yr old. That was odd. I asked him if his mother knows he talks to old ladies that way. I just got a look. Then he turned his attention onto another mom. ~sigh~
I came to the decision that only 30 of you actually read this blog. You are my chosen few. Only you will be allowed into the homesteading utopia. Feel special?
~maybe I spoke too soon. Read comments, if you can. it crashed earlier. People clamoring to be included in the utopia~
by Phelan at 9:05 AM

Email ThisBlogThis!Share to TwitterShare to FacebookShare to Pinterest
Labels: misc

He probably thought the mess was the best part! Funny how kids' minds work!

Only 30 of us? I would have figured a LOT more!

30 that actually read. I get more visitors than that, and then I tick off a lot more. But 30 that hang out here. There could be more lurkers that have yet to announce their presence. Those are my precious ones. They too will some day find a home within the utopia. But they are still on the cusp of embracing it.

Great! Will there be windows in our building?


I guess I should explain this is the punch line from an old joke to those who haven't the joke.

I don't think I have heard the joke. Please tell it!

I read you everyday just don't post.Sorry. Not much on commenting but learn a lot from you and your family.

I guess I'm a lurker. I read just about all your postings and really enjoy them. Keep it up. My first time was reading about the turkeys getting in the kitchen. I've been hooked ever since! Sarah

hello mizdeb! Welcome to the utopia :). Glad I can help people learn. Homesteading can be a difficult thing, especially since it is a jack of all trades type of thing. And learning it all on your own gets you bit.

Hello Sarah! Another precious one :D ugh, yes the turkeys and their Wiley ways. They are like crack heads when it comes to dog food.

He looks awesome! I am loving his hair [and keeping Wallene away or she is next. Oh, wait, I agreed to blue hair too. giggle]

And I better be listed in the top ten of Homesteading Utopia. [And you know it is so more then 30. :D]

I'm stoked that I am accepted. Now....beef up those cattle and get some rain before I head west ;)

Skippy, of course you are. only if you agree to be the zombie stripper. I have laid out the rules for you.

You crack me up. A fifteen year old?! I like your question to him. Lol.

What was that Laurie? You dare question the great OZ!!!

Rae, and it wasn't a scary post now was it?

Well I couldn't remember whether or not I follow you, so I followed again, hows that? As far as leaving if you tick me off, he** if I did that I would leave every blog I follow at least once a week or so. I can't remember the last time I totally agreed with anyone! Keep up the good work.

oh Bob, you followed me twice! I heart you too ~insert evil not flirty laugh here~

I want to go to utopia!! I only post occasionally so maybe the suburbs of utopia.

Donna, lol. I need some coffee before I can make a flippant comment about that. :D

love the hair! reminds me of my now 33yr old who changed his hair color daily and grew it in braids and shaved it and wore a spider web colored dew to the Senior Prom..he is still an individual. Funnier yet is he was a State Highway Patrol officer for 4 yrs and now is Full time Military. Who'ld a thought! Trust me though....he's a really good egg!

I Love your blog while reading it from my bit of land in Australia. Hope to hear more from you

I read your blog...leave some comments but mostly just lurk. I like your writing style.

DebH, Snowyman and SusanB, glad to hear from you. I like to know that people are paying attention. There will be a quiz at the end.

I read. I just go on google reader binges. I kind of go through long phases when I'm pretty anti-social and either don't read or don't comment.