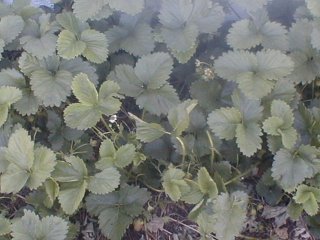 Strawberries, sweet, juicy strawberries. What person, unless allergic, doesn’t want their own big red strawberries growing just steps away from their front door? There are easy to grow in almost anything, pots, hanging planters... Of course there are some people out there that just find strawberries disgusting, I have yet to meet one, but I know they are out there.

Before I learned of the problems of mail order plants and seeds, {I will get into that later} I ordered 25 strawberry plants. When the time was right for planting in my area, the plants arrived along with a helpful informational pamphlet on how to plant and take care of my strawberries. Did that sentence seep with sarcasm? It is difficult to figure out which way is up or down when it comes to a clump of string twigs. Trust me on that, for once I planted some strawberry twigs for my mother, roots up. {I have a good excuse, I was young and never saw such a thing before, and that pamphlet was confusing}

Where oh where should my little plants go? They need at least a half day of full sunshine, and well-drained soil. Not a problem with that. I planted them on the north side of my home. Digging up the ugliest blood-red irises, I have ever seen. {Not only were they disfigured, but rather slow in the intellect department} Half of my strawberries were planted here and the other half went on the east side of my home, replacing the wild morning glories that after four years I still have yet to be rid of. I watered and impatiently waited for those little white flowers to make an appearance.

To pass the time, I refer back to my homesteading books. And why did I not look them over earlier? Because growing up in town I had a neighbor whose strawberry patch I raided every summer. I was an expert. So you can imagine my horror to find out that I have done so many things wrong! First off they yearn for southern exposure. Then there is this thing called a training system. You mean to tell me that you can’t just stick the twigs into the ground? Apparently not. You are to place the mother plants into the ground, and not allow the runners {or daughters} to grow. Cut them off at the knees! I ignored this, and now the daughters have the run of the corner of my house. This doesn’t bother me in the least, possible because the strawberries that I planted on the north side of my house, died a tragic death. The combination of too much shade and flooding was not the primary cause of death. My digging them up and trying to transplant them did them in. Please remember, when dealing with strawberries, plant them once, and in the correct place.

And back to the waiting. The books suggest {well, I took it as a suggestion!} that you pick the flowers off the strawberries the first year, so they can concentrate on building up their roots {BAH-HUMBUG} I have not the patience to wait another year. One morning in late June, I walked outside to find the little white flowers blossoming. Oh jump for joy! I merrily hollered at my husband. It has begun! Slowly the flower petals fell and small green berries emerged. They grew larger and redder as the days passed. The berries were ready one at a time. My two oldest sons discovered that they do not like them {Ok, so I do know people that find strawberries disgusting, but they do like strawberry jam. We will blame that on age} So what should I do with these slowly ripening berries? Strawberry short cakes. Over the next two weeks, I picked the berries, washed them, hulled them, and put them in a quart canning jar, and sprinkling sugar on them before soaking them in the fridge.

The fourth of July was upon us, and I made the short cake from scratch. Well . . . I didn’t make short cake, but I made angel food the first year. And got very lazy, I bought the wipe cream. The strawberries were a hit. Every year since, my husband’s family has requested the same cake. It’s nice that something so simple makes so many happy. 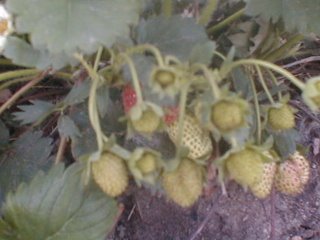 Here is where I was going to tell you about canning strawberry jam for the first time. I ended up freezing them last year, and this year’s crop was going to be jam. I walked outside yesterday to start gathering for it {My strawberry short cake is already soaking} and someone has stripped every single berry off the plants! ALL OF THEM! I thought {at first} that our 2-year-old had done it. He will not eat the strawberries out of the fridge. They must be picked, by him, right off the plant. He has discovered that the green ones are gross, and that if there is a little red on it, to eat only at the red part. But the strawberries that were out of his reach are gone. The ones that like to hide under leaves, are gone. The green ones are gone. The only things that I have had problems with eating my berries, are rolly pollies {pill bugs} and though they do some damage, they have never eaten that many berries in a night before. Yes, I have rolly pollies eating my strawberries. I have looked everywhere to try and find out how to stop them, without pesticides. {I grow everything organically} I can’t even find the subject of rolly pollies in the strawberry patch. I have mutant bugs, not just mutant but huge! I have spent most my childhood studying the rolly polly, {If I don’t tell the story, my parents will tell it in the comments, better to embarrass myself right now} I collected them, played house with them and their earth worm friends. We also had fashion shows. {I did have human friends, they just didn’t play right} I also discovered that rolly pollies scream if thrown into a fire. Now these rolly pollies were the dark gray, small things that people have grown use to seeing. But the ones in my strawberry patch are monsters! Gigantic ugly things that are so unafraid that they don’t curl up into that tight little ball of protection. Maybe the strawberry fairy gave them super powers.

Tonight I will get out the frozen strawberries {If you choose to freeze them, hull them first. That’s a mistake I will not make again} And turn them into jam. I will have to use pectin, because they are not fresh. I will give you a full report on how that worked out tomorrow.
by Phelan at 11:05 PM

Bummer about this year's crop of strawberries. I hope the jam turns out well. The srawberry shortcake (angelfood cake) sounds delicious!

That stinks that you lost your strawberries. Perhaps a rodent got to them? (Although I've heard they also prefer ripe fruit.)