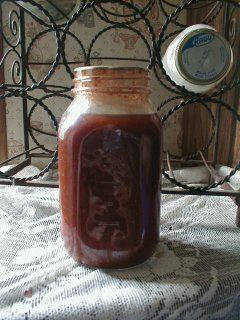 Last harvest I felt overwhelmed by all of the tomatoes. We had 6 plants, all bursting with different types of tomato. What on earth would I do with all of them? I made chili, simple. I made spaghetti sauce, even simpler. I made salsa, not too hard. And then Ketchup. How hard could that be?

I gathered the tomatoes that would be turned into 6 quarts of ketchup. {That's a lot of ketchup!} I washed them, boiled them until the skin could be pulled off of them. Oh but wait! You're not to pull the skin from the flesh with this recipe. No one must smash them in a food mill. And what is a food mill? I ran outside where my husband was talking with a neighbor. Not a fellow homesteader, he raises and trains horses. "What is a food mill?" I called out across a small field. Of course he couldn't here me, and I was forced to walk out there barefoot {but not pregnant}. "A food mill, what is it?" He asked if the books said anything. "No." Well then get on that computer of yours. {You would never guess he was in his early 30's the way he talks about computers} So that is what I did. I pulled up a search engine and looked about. here' is a food mill. I don't have one of those! {Here is where I suggest doing a lot of research on what to do before hand} I ended up using my sifter. {Mine isn't that pretty, it's at least 20 years old. Yes, dad it's the one from Haysville} I do not recommend using a sifter, a food mill is completely different, but I did use it, what choice did I have at that point? {oh, you mean I could have drove into the city and bought one?}

I placed the tomatoes into the sifter and using a meat hammer {that is also over 20 years old} I beat the tomatoes into submission. Filtering out the seeds, pulp and skin. Slowly {hours later} I had enough juice to begin. Since this was my first time, I didn't spice it myself. I bought a pre-made packet of seasoning. I added the sugar needed and simmered, cooled, simmered again. And made an attempt the remove tomato skin from the little holes in the screen of my sifter. {I had to break out the tooth picks to do it}

Finally it was time to can. I used the hot water bath method. Sinking the tightly closed jars into boiling water that just covered the lids. The water stopped the rolling boil. The book says to let it roll. So I waited and waited for it to come back to a boil. That never happened. An hour longer than suggested, I finally pulled the jars out and allowed them to cool. It worked! They were sealed. I was so proud of myself.

One would think that 6 quarts of ketchup would be plenty to last me until next harvest. HA! We ran out in 3 months. This year my husband told me that we would double our tomato plants. That was fine by me. He came home with 28 plants. {And he's the one that's good at math}

You got that much out of just 6 plants? Wow!

With 28 plants you'll have ketchup to last for the next 10 years!

That so sounds like a story that could come from here. :)

My grandma always made her own ketchup. I never liked it. It was too sweet, but I am sure it was just the recipe.

Yours must have been really good to got through that much so fast, or you have a child like mine who thinks ketchup is a side dish,not a condiment!

I'm impressed. We could easily go through that much ketchup (not me, but munchkin and hubby). 28 plants? You'll have enough tomatoes to make all kinds of things!

I LOVE real sugar ketchup...not the stuff with corn syrup you get at the stores. Sometimes you can find Kosher or Latin ketchup with real sugar at speciality stores.

I would love to make my own just to get that taste. Neat...I don't know what a food mill is either...I may need to look into this!

Thanks for the information!