Husband is working overtime, from here into the rest of the year. It has it's good and bad sides. Good, is we can use the money. Bad, the job is hurting him, and the boys don't get to see him as much.
And the very bad? It forces me to be more sociable, nicer to people. That is a difficult task for me. -wry grin-  my people skills have been improving. And I have began to meet some nice people. At least to my face they are nice. The culture here is far different than I am use to, and it seems I have to be wary of intentions. We are learning that, slowly. But we have befriended one person that we seem to be able to trust. A gentleman biker, and not a client.
He heard I have been canning on a campfire, so swung by and dropped this off for me. 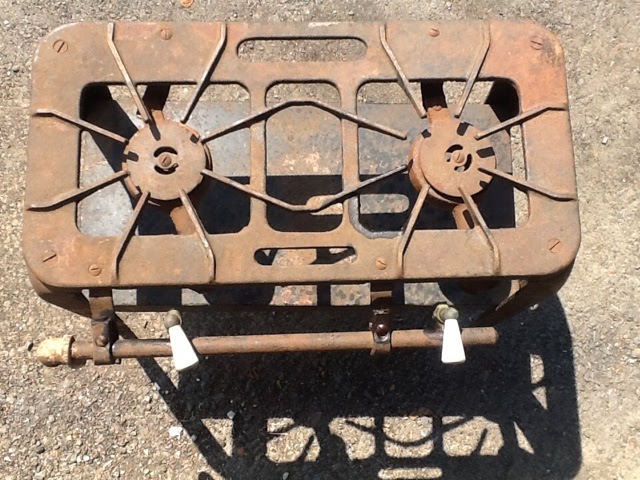 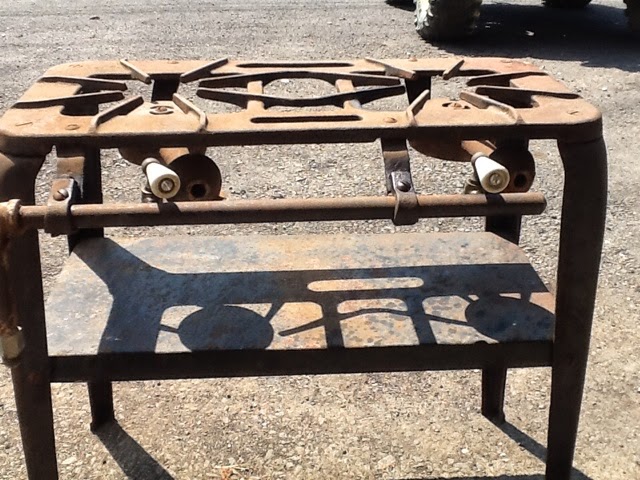 Awesome, right?
The copper connectors have broken off, but we have some things off of a motorcycle that will work to repair it. It is propane, and I can afford to get a small bottle. This means I can pressure can! I do need to get to the extension office and have my canner tested. I blew it up a few years ago, and it doesn't seem to be working correctly.
He is also my plum hookup. When he brought this by, he told me he is plum-full. And whatever was left was mine. After work Saturday, I swung by and gathered a good amount. Plum jelly here I come. He also showed me is crabapple trees, and told me come fall I can have all I was willing to deal with. My eyes lit up and I actually told him he was the bees knees. He laughed and said he thought I would enjoy that.
He has been wonderful, here I am gushing. Ha! We swung by on Sunday to pick up a very old bale for our garden. While we were standing there talking, his huge bull, and I mean huge! Waylaid into a new bale, a hay explosion that shook the ground. Well, no, but it was a mess. We helped clean up, he feed some off to his goats, than offered the rest to us. We made two trips, one with new feed hay and one for the decaying mulch hay. Husband looked over his generator for him, to see why it wasn't working.
Covered in hay and picking minuscule thorns out of my palms, I stayed behind on the second trip to start dinner. Rain was threatening. As the hamburgers sizzled, and the green beans rolled in the water, the thunderstorm struck. I quickly shoved dry logs into the fire, hoping the blaze would prevent the rain from cooling off the flywheel too much to be of any cooking use, and covered everything with lids. Everyone ran into the house.
It took me a moment before I made a decision. I was home, it was still light outside and the rain was drenching. I ran out in nothing but a tank top and boxer shorts and took the most luxurious shower I have had in almost a year. Soon Medium and Small were outside in their swim trunks taking advantage of the rain. Baths are nice, but there is nothing like a good cleansing shower.
I feel wonderful this morning.
Friday night was a bit odd. The boys and I were headed down the driveway, when I abruptly stopped. Someone had taken a lot of time to arrange Mimosa leaves (only mimosa that we have found so far) across my drive. 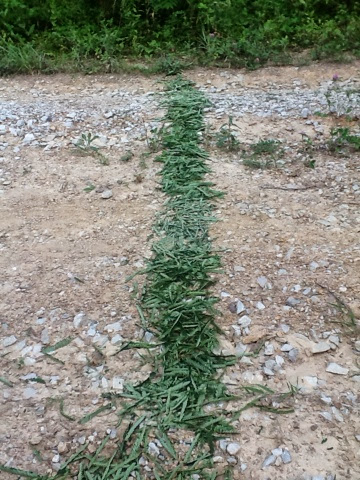 We weren't sure if we should cross it, and if we did, what would happen. We didn't end up in fairy land, and I hope whoever did it, did it to keep evil out, rather than to keep our evil in.
Weird.
by Phelan at 7:55 AM

Email ThisBlogThis!Share to TwitterShare to FacebookShare to Pinterest
Labels: doing without

Whoa! That leave thing would have freaked me out just a tad!

Sounds like ya'll made a friend there. What a great gift too. The table top cooker I mean. (although the plums sound wonderful and who the heck passes up hay food grade OR garden graded!)

Hang in there girl. I know you write with a lot of sunshine and roses but it's not like having to live there 24/7 in your shoes.

Are ya'll thinking you'll be able to do something about that scary a** drive of yours before winter? (I have no idea why I wrote that but it just sorta landed there!)

Hugs all around!
Sci

Well, I got tired of writing all the negative, for now.

Nothing to be done about the driveway. We don't have the money, so it will be a few years before we can take care of it.

Strange to have someone lay a line of leaves across your driveway. I wonder if this type of leave deters cattle from crossing??

Yes, it does sounds like you have a friend. Fresh fruit, I would snatch up in a heart beat.....enjoy canning.

Maybe I would check around for an local superstitions or curses with mimosa leaves.

I love a bath and hate a shower, but your rain shower sounds luscious. I like sitting in the tub, not a sink bath just wiping off.

There are some crabapples that I have my eye on. When they are ripe, they are full of bugs. This year, I am going to get them when green and make my own pectin, can it and have it to use.

That was some great gift and the guy sounds like he is a good friend.

Out of curiosity I did a little web cruising on Mimosa leaves. Used in incantations for positive karma or to release negative karma. The whole Mimosa plant has lots of healing properties. The one that caught my eye was for sagging breasts! I wonder if I rubbed it all over if it would tone everything up?

Mimosa is primarily for protection and purification. Sounds like you have a friend somewhere. :)

I asked about the leaves on Gramma K's facebook page and here is what she said: "So far the only thing I could find is:
"Placing mimosa under your pillow - will give you prophetic dreams. Bathing • Bathing in mimosa - destroys hexes and curses."
I don't know where it comes from or who wrote it.
I will keep looking for the one you mentioned."
Maybe she'll find out more, if she does I'll let you know. :)