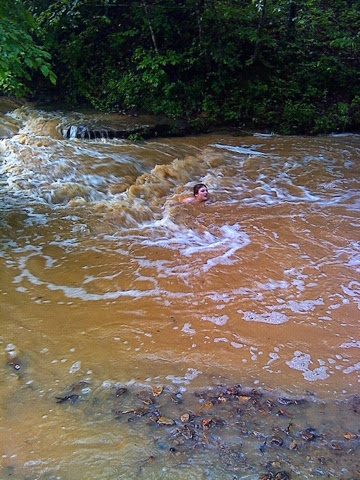 Email ThisBlogThis!Share to TwitterShare to FacebookShare to Pinterest
Labels: weather

Your not in Kansas anymore Dorthy....

Doesn't matter where. I am. The fact that the adults allowed this to go on irks me. If there had been a true tornado, this put my children at risk.

Because the children could feel the panic in the adults the children went off the deep end. They need to practice the drills until every child and adult can do the drill in a quiet calm manner.

I remember we had a time limit to get where we were going and get into position. If we didn't get it right we did it over-n-over until we could do it right.

I was amazed at the panic high winds (20mph) caused when we lived in Michigan and all the junk that blew around because nobody put anything away. Of course, I was outside with my arms stretched out catching as much air as I could. : >) Boy did I miss my Kansas breeze! (20 mph)

Thank you for your concern. I too have grown up around water. The creek has a long tradition of boys doing exactly what mine did. I kept my eye on him. We already had the talk about rushing water, and this is the only time he was allowed to do it. As for the truck crossing the water, it wasn't an inch deep, looked more dramatic than it was, as it wasn't rushing, just flowing.

but again thank you for your concern.

I have to agree with you, the adults need to know exactly what to do and instruct the kids accordingly without chaos.

Once you've been through a tornado you pickup on the signs and know what to expect to prepare for the next one. Last years were bad here, I pray we don't have to go through a big one like those on May 20, and the 31st of 2013.

Sending hugs to you and yours.
Sandy

I live in AL, tornado alley. When people hear the name of my town, some say they don't even want to shop or visit here because it appears we are a tornado magnet. The storms track on a highway and travel to a resort right up the highway to this town. I know which tiny towns to listen for on the weather alerts.

We have two tornado seasons in Dixie Alley, the only place in the world with two tornado seasons. We have a second season in the last of Oct and all of Nov. Kansas and Alabama have had more people killed by tornadoes. Today, I thought one was coming, well, already here because hickory trees were bending to the ground and thrashing in a 100 ft arc. That lasted for a full ten minutes.

The scene from the school sounded horrific and out of control. I would be tempted strongly to go get my children. The problem here and probably there is that tornadoes cannot be seen from afar. Plus, the tornadoes here and probably where you are come in rain, hail, and any time of the day or night.

Tornadoes can come down in hollers, no matter what they say. A mother of seven was the only one left after a tornado hit their holler. They did not take shelter. This happened about 70 yrs ago, so people in hollers around here do not repeat the lore that tornadoes skip the hollers. I don't want to frighten you, but don't feel secure down there.

Fire? That would be horrible. Even 3-6 inches of swift-running water can topple an adult.

Well, I am glad your kids made it through the hysteria.

Sounds like it's time to send letters to the principals of your sons' schools, with copies to the superintendent. It's utterly unacceptable for a standard emergency procedure to be stuffed up so badly. As you said, it put YOUR sons, well-prepared though they be, in danger. Not ok. If you don't get satisfaction, a copy of this blog post to the local TV station and/or newspaper.

Sounds to me as though the teachers and other adults need some additional training to prevent causing panic in the children. Just my thoughts, though.

I agree with you. The children and the adults should have been better prepared. This was dangerous.

You have created a beautiful life.

That must be one wholly unprepared school system. Growing up (here in KY) we had the same tornado drill training that you had in KS. Even here in SoKY the drills are the same as they were then...the niece was telling me about the non-issue hideaway they had the other day whilst during finals and rough storms.

I'm guessing it wasn't so much the plan that was the problem there as it was teacher/student panic.