Remember my stove?
Of course you do. The 1937 Detroit Jewel. I did the research and learned that I only needed the rear valve to convert it from natural gas to propane. Awesomely cool.
As we are still getting to know the area, we ended up in a big box store. Ok ok, we need that big box store to be able to afford this stuff for now. But I knew they would not have what I needed. I talked to the appliance guy. He too thought the stove was glorious! Alas, he had nothing to help me. Everything there is modern. He said that if anyone would have it, Arrick's propane service would.
So I called them.
The receptionist was sweet, but unable to help me, so she transferred me. I started to explain, but before I could actually say much. . . "I have an antique stove that I. . . " he interrupted, "1937? It's obsolete."
I said "I know. . . "
"Obsolete."
"But all I nee. . . "
"It's obsolete. Everything would have to be changed out. It's obsolete."
"Ok" click.
Like some stranger trying to rain on my parade would stop me! 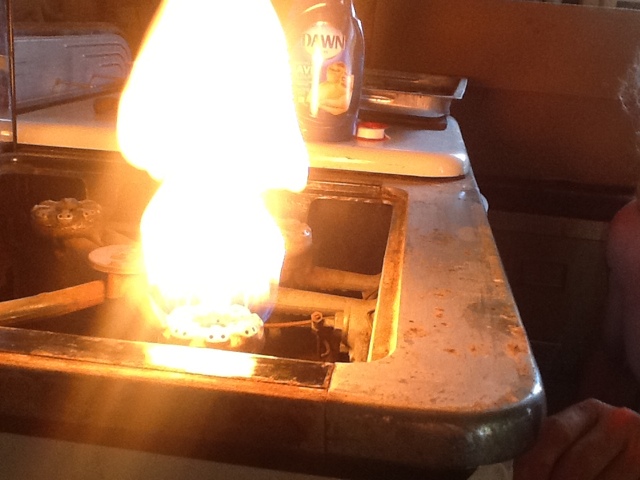 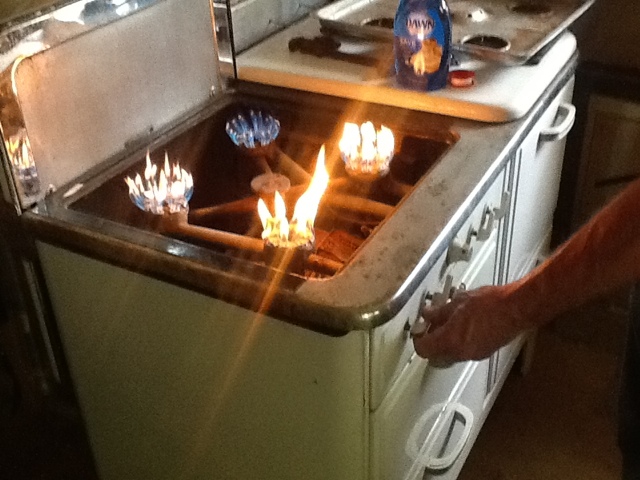 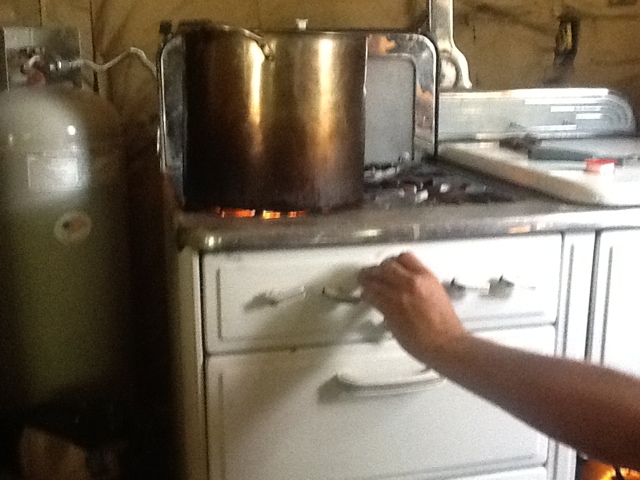 Perfect.  (Propane tank has been moved outside, don't fret)
Obsolete my rear. 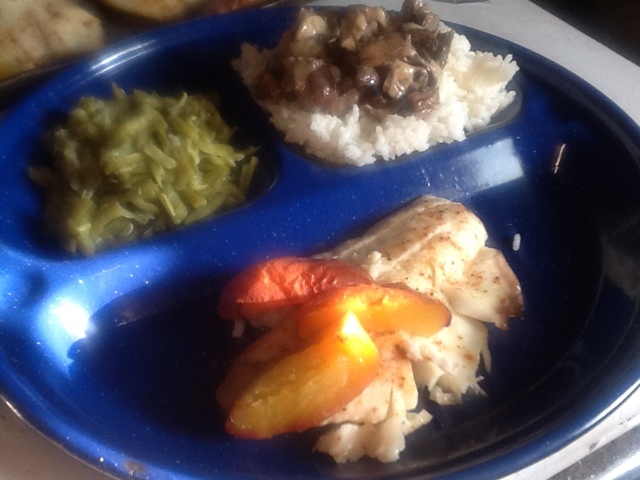 Email ThisBlogThis!Share to TwitterShare to FacebookShare to Pinterest
Labels: Beginnings

Don't you love "professionals" who don't know what the heck they're talking about?!

(Can't wait to meet you guys in person!!)

Please email a photo to Mr It's Obsolete. :)

I don't know what you are looking for for the stove. The pictures indicate the burners may need some cleaning???? Try going to a welding supply house and getting a torch tip cleaning set....use it to clean the orifices in the burners perhaps????

I suppose he thinks cooking over an open fire is obselete as well. Hope he never needs to cook without all the modern conveniences....he'd apparently starve to death.

Congrats on getting the stove functioning just in time to make dinner :=)

What a true find my friend.

You can't find professionals any more in businesses to help or know what their talking about.

It figures the attitude of both companies to treat you like that. I have the misfortunate to work for part time peanuts for the big orange, won't give them the benefit of my dime for free advertising, and you wouldn't believe how the upper management treats their employees and customers.

Sometimes the more certain and positive (to the point of arrogance) these guys are, the more I doubt them. Apparently so did you...and look what happened. Success!

It is gas, for goodness sake! Fittings can be had to make it work. I love the way people are not willing to help because it is easier to say something that will show a superior knowledge! Or, the person wants to sell you something. Or, maybe she wanted to text someone.

Are you going to get one of those huge tanks that sits outside lots of houses?

I absolutely adore you and your familys attitude. I missed your adventure while i was gone.

My mum and dad have a stove they bought in 1964 - still going with some safety alterations one by a gas engineer - obsolete my arse!

Where there's a will,there's a way! LOVE the stove!!!

What a great stove...good for you.

I'm so happy for you! What a find and the fact that it works is amazing! Sorry I haven't been around, to congratulate you guys on the move, been busy here with family stuff! The place looks great and I'm so happy to hear the boys are doing well with school, even if the teacher is loud! :) Tell medium, don't fall for none of that girly stuff... They are nothing but trouble ( I can say that having 3 of them ) LOL!