I am sure the title invokes one of Captain Kirk's girlfriends when heard. Ok, maybe that's just me.
Last night we butchered our Tom. In one side of his breast, there was what appeared to be a bullet wound, coming from the inside out. Of course anything out of the ordinary sends me running to do a bunch of research. And I am never satisfied with the first answer I find. Because. . . Because people can be a bit silly. So many chicken littles have access to websites, and the title expert. So dig dig dig.
What I found was, that green breast disease isn't bacterial or viral. The meat that is tinged green can be removed, and as there are no infectious agents, the remaining meat can be consumed. That's what they agreed upon. Ok, cool. It isn't a lot on the bird, so no problems.
What I also found was the claim that this only happens in turkey hens and broiler chickens. Wait? This is a Tom.  Next I see that it only happens in a certain blood line of domestic turkeys. Well, it is a domestic turkey. That Jives. And that it is caused by penning the animal up, causing it to flap it's wings to excess. Wait, he was free ranged.
So what is green breast disease exactly? It is atrophied deep pectoral muscles. The muscles used primarily for flight. The muscle is unable to receive enough blood and oxygen. The amount of birds with this is uncertain, as much of the production of these large birds are sold as whole carcasses. However several sites suggest that it is on the rise. I say possibly because of the new interest in raising poultry.
As we were cleaning the meat off the turkey, I heard "dear God," that ain't right." Poor farmhand looked nauseous.  Husband immediately thought it had something to do with my gold wedding band that went missing; not the silver one I lost in the wreck. Farmhand (who is still trying to figure out how to use blogger, and who I will not allow to post while drinking) thought it looked like a bullet wound; however it was going the wrong way. A collective sigh of darn it, was heard. We were planning on a feast!
Good thing I like doing research.
So the next time you see this 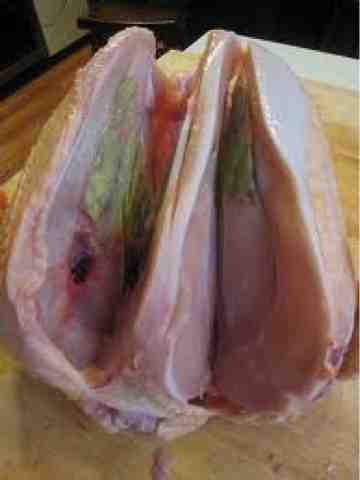 On your fresh butcher or store bought bird (stock photo I was bloody and it was too dark to get a decent pic) no worries. Just cut it out. It won't hurt you.  It just grew too fast for it's britches, or it liked to flap it's wings a bit too much.
by Phelan at 9:09 AM

Email ThisBlogThis!Share to TwitterShare to FacebookShare to Pinterest
Labels: turkey

I say... if Anonymous can post while drinking... Farmhand should be allowed.

Thanks for the info. I think I would have discarded the entire bird if I saw green meat!

I'm with Diane C and that's because I've never heard of this or seen it before. Thank you for the information. This is one to keep in my brain for the future.

That is really disgusting. I will never butcher anything, but would have buried that carcass, not allowing even the animals to eat it!

Did you know if you allow someone else access to post, that person can take your name off as an author? it could all be accidental.

Practical, yes I knew that, but don't see how it is relevant. As for butchering, you belong to a homesteading community, majority will butcher and talk about it. If you are never going to butcher, then kudos to you. That is your choice.