I know many of you, myself included, have been verbally (? Typingly?) attacked on our blogs by self professed PETA members because of our livestock butchering. A writer at the Huffington post has a few things to let us in on. In the past I have informed you of the way they allowed cattle to starve to death during a blizzard in Colorado a few years ago, citing that it would be better for the cattle to die in the valley then end up on a dinner plate.

If you click over to the article, there are graphic pictures of dead pets.


People for the Ethical Treatment of Animals (PETA) is an organization that publicly claims to represent the best interest of animals -- indeed their "ethical treatment." Yet approximately 2,000 animals pass through PETA's front door every year and very few make it out alive. The vast majority -- 96 percent in 2011 -- exit the facility out the back door after they have been killed, when Pet Cremation Services of Tidewater stops by on their regular visits to pick up their remains. Between these visits, the bodies are stored in the giant walk-in freezer PETA installed for this very purpose. It is a freezer that cost $9,370 and, like the company which incinerates the bodies of PETA's victims, was paid for with the donations of animal lovers who could never have imagined that the money they donated to help animals would be used to end their lives instead. In fact, in the last 11 years, PETA has killed 29,426 dogs, cats, rabbits, and other domestic animals.

Continue to read the article here >>>

And now I know that we treat our animals, pets and livestock, much better than those that proclaim themselves to be representatives of Animal Rights. (Always knew)

Before the links start coming, yes I have read PETA's reasonings. However this isn't about sick animals, this is about deceit, and neglect on their part. This is about killing healthy, adoptable animals. I have known for years that they euthanize, however I didn't realize how hypocritical they truly were. I am glad for people out there that expose the horrors of how factory farms, puppy mills, and now PETA, run. 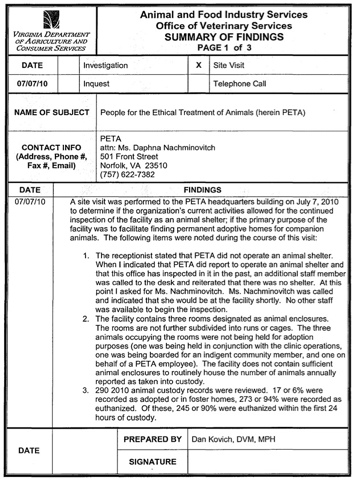 How much better if PETA concentrated their finances to spaying and neutering animals so no babies of any species would have to be destroyed. I forwarded that Post article to my friends when I read it. I hope people will start funding no-kill shelters.

PETA does just that, actually. Last year alone they spayed and neutered some 10,000 animals—all at a reduced cost (or free) for people in poor communities who couldn’t have afforded to have their animals fixed otherwise (read about it here: http://www.peta.org/features/fixing-animal-homelessness.aspx). PETA does more than most to combat the animal homelessness crisis and resulting need for euthanasia. Unlike “no-kill” shelters, they never turn their backs on animals in need. They give a painless passing to suffering and aggressive animals and refer the healthy, adoptable ones to a local open-admission shelter for adoption. Before throwing stones, please read up on why PETA does what they do: http://www.peta.org/b/thepetafiles/archive/2013/04/05/euthanasia-we-wont-run-from-what-needs-to-be-done.aspx and http://features.peta.org/petasaves/.

Already said I read that. You are regurgitating the same bs others are.

Dessa Wolf, how can you defend an organization that is responsible for horrific animal treatment along with helpful things like spaying/neutering?

Much better to defend and put your time and money towards groups that do not treat homeless animals like pests to be exterminated.

Think about it a minute.
Parker

Dessa Wolf, how can you defend an organization that is responsible for horrific animal treatment along with helpful things like spaying/neutering?

Much better to defend and put your time and money towards groups that do not treat homeless animals like pests to be exterminated.

Think about it a minute.
Parker

LucyP said that not Dessa. Lucy is a shill for PETA. They have been copying and pasting this drivel every where. Verbatim.

Whoops! So sorry Dessa, my eyes must have jumped to the wrong name. Don't know why the double-post, either.

shocking..now i have even less respect for peta than i had before...