No death for you today

Large went out to do his morning rounds and found a lamb laying close to death. She is three days old, and we are unsure what happened.

He scooped her up, bundling her under his flannel and brought her into me. Such a compassionate boy for a meat eater. He was on top of pulling out bottles and nipples, getting the formula set out. As I sat with her in my lap warming her. She wouldn't fight.

Young critters sometimes resist you in a way that is very, scarily, similar to death throes. As she started to warm, her body would tense, and her neck would stretch, her head touching her spine. Her eyes were hazy, as her face twitched. So close to death.

I used a syringe to force feed her some warm formula. Our sheep have never been milked, so I keep supplements for all my critters around. She did swallow. That was a great sign, and my heart ached a bit less.

It took hours to get her to stop shivering. But when she did, she stood and peed. But immediately laid back down. This time though, she wasn't on her side. She got all four legs curled up under her. My heart ached a bit less.

She still wouldn't suckle, so I forced fed her some more. The twitchy abated, and she watched us with suspicious glances. Finally she stood again, I set her on the floor, because it is easier for me to deal with critters on my couch; I am the reason we can't have nice things. She had a sticky bowel movement and peed. Then she boldly walked up to the dogs, checking them out. My heart leaped for joy as she leapt in a spook away from me. I placed her back up on the couch, on the blanket I had warmed her with. She took a moment to smell and taste it, then curled up. She looked up at me, her eyes finally cleared. I covered her up, and she fell fast asleep. She is behaving spoiled already.

Today has been good. 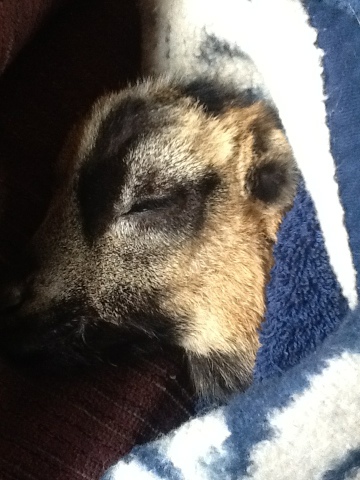 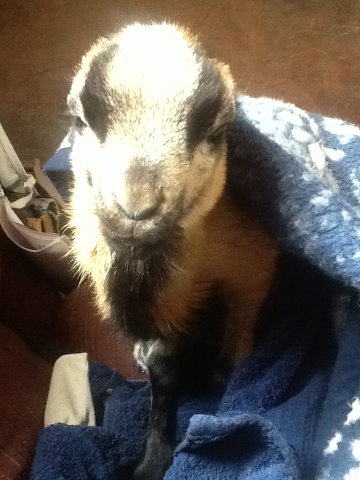 Love stories like this. You have to be proud.

I am thrilled DFW.

Poppy sends greetings to her fellow spoiled couch critter! (I'm so glad you saved your lamb.)

Awww, now I have the warm fuzzies. I'm glad the lamb pulled through.

I am the reason we can't have nice things. Some notions are very relative. Nice to whom?

As for being spoiled? I go back and forth on that, but I have to think that some of it is necessary. Being spoiled means being able to take some things for granted... things perhaps we shouldn't but it pleases me that some can, and do, get that opportunity. That's... all I'm saying there.

A very pleasant day and story. Thank you.

I think the lamb is worth more than "nice" couch lol

My tongue was planted firmly in cheek when I was talking about the couch. Ha! And she is taking full advantage on us humans. Curled up and slept on Husband's chest last night. I don't blame her one bit.

Yay! I am so happy she is doing good. It's hearing those (and having those) success stories that get me throught the rough patches of farm life. Give her a hug and kiss from me.

SO thankful for this spot of good news for you. Glad the lamb is continuing to do well!!!

"I am the reason we can't have nice things." Hahahahha, love it. Good job you guys!