A bit on potatoes

This is a repost, but as potato planting season is nigh, I thought a repost would be acceptable.

When picking out the variety of potato you wish to plant, know what you want to use them for. Some are better for roasting (reds) while not so good for mashing (Yukons) some store longer term better than others. The list of different potatoes is rather long. (Russets are best for mashing) For canning, I prefer a waxy potato, and only using the "baby" or new potatoes, none that require cutting to get in the jar.

After you have purchased your seed potatoes, you might need to cut them up. In to how many pieces vary with the size of the seed potato. Some companies only sell you the "baby" or new potato size. While others just send or you pick up a big honking potato with a couple eyes.

When cutting your seed potatoes, you want to do so 24 hours before planting. This gives the potatoes enough time to callous up, or generate a leathery feeling outer skin, that helps prevent rot. It will not stop it, merely prevent it. When cutting, you need to allow at a minimum, 2 eyes per piece. Attempt to cut the pieces no smaller than 2"x2". No smaller than a golf ball. Try not to allow the meat of the potatoes to touch as they air out, and place them skin down.

Most potatoes don't care for too fertile of soil, especially sweet potatoes. If you soil is hard, I suggest long double wide mounds, and creating lazy beds. Place your cuts on top of the soil and cover with 6-12" of straw, depending on how cold it gets. Do not allow them to freeze, or they will turn to mush!

Potatoes should be planted in early spring, as soon as your ground is workable. When planting, place the eyes toward the sky. Honestly it isn't required, just throw them in a hole and call it good, the eyes will shoot for the warmth.

I did say to plant watermelon later in the season, in the middle of your lazy bed, however you should keep all other melons and squash away from them as they share the same destructive insects. Watermelon is a heavy feeder, while potatoes are not. When you lazy bed, the straw will compost, over feeding your potatoes. You end up with these wonderful plants, but lower quality of root. Watermelon, we have found, seems to help with the potential over feeding. Creating a good balance for our potatoes.

Now for sunflowers, they do help with the potatoes growth, but you should be aware the they share the same blight. They do not cause blight in each other, but will share it. I plant sunflowers with my russets, allowing the potatoes to use the tunnels that the sunflower roots create; aiding in potato's size and ease of digging up. I have yet to have a blight problem with this method.

For those of you unable to grow in or on the ground, you can plant potatoes in containers. Either by covering them in soil, or adding just an inch of soil to the bottom of the container, then covering with straw or composting mulch. Tires can be stacked as well. Start with one tire, rough up the soil, place potatoes down, cover with straw. once the green tops have sprouted, add another tire, and cover the greens with more straw.They will grow the same as if on or in the ground. I found that reds seem to grow better in tires.

When you potato plants have flowered and the leaves have died, it's time to harvest.

When harvesting time comes, dig potatoes up while the ground is dry. Or if you are doing the lazy bed method, remove the straw and pick up off the ground. You may wish to go ahead and rough up the soil a bit to see if any of the tubers decided to dig in. Do not wash them before storage, merely brush them off. Keep tubers in dark, cool areas, like a cellar or under your bed, for storage. 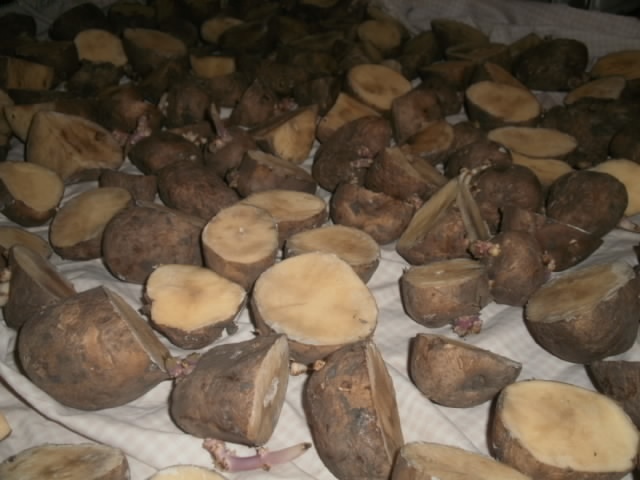 Email ThisBlogThis!Share to TwitterShare to FacebookShare to Pinterest
Labels: garden

Thanks for the nice tutorial on potato planting, and good timing for me as I'm just now in the middle of planting my own garden.

Off to read the rest of your new posts.