I read your comments. Sometimes I am nice enough to reply. . . Sometimes. It seems every one is asking about the knee and the move. Not a whole lot to actually say about it, but I will try.

The break is fully fused and anchors seem to be holding. I can put full weight on the leg now. I got lucky, or maybe I am just too squirmy, but the atrophy was kept to a minimum. The muscles in my thigh and calf hold me up just fine. However the part of the thigh muscle that spreads apart around the knee area is still weak. I can get a bit wobbly. I also deal with unexpected bouts of vertigo in some very odd places. I don't think it has anything to do with heights. Ever since I woke in the hospital I have had nightmares about falling. It's the fall that scares me. It's the fall that hurts no matter from what height.

Sometimes it feels as though my lower leg tries to go a different direction than my upper leg. But that is just part of relearning how to use it all together. My knee has to break in the "new" cartilage as well. As I mentioned to you before, they could not save all my cartilage and just rearranged the largest piece. So I have to re-groove it, so to speak. It grinds. I can hear it as well as feel it.

I am now bending my knee to 90 degrees. It makes me want to vomit. But Husband is a cruel one, pushes me further. I can feel everything pulling, the ligaments pulling, through my upper thigh, into my groin and hip, to my foot. You know when you cut off a chicken foot and you freak your kids out by pulling on the tendon so the claws grasps? Yep, I feel like that chicken leg.

My ankle is still dealing with a severe sprain from the wreck. Husband says because of the lack of use, the sprain won't heal like normal. This has caused me to be a bit more cautious about walking, and my ankle is weak. Basically we are down to flexibility and range of motion. Besides my normal stretches and strength exercises, I have been doing a few ballet and belly dancing motions to help with stability.

Well we are still in Kansas Toto. But it looks like we have a buyer for the homestead. A police officer. Oh bad neighbors will love this! We still have to deal with the bank on a few things before selling.

We were hoping to be able to stay until the boys were out of school for Summer vacation, May. However I don't think it will be feasible. As soon as we have the rest of the down payment, which looks like it will be mid February, husband will head that way to sign paperwork, throw up some fences, a shed, and move in a mobile home (to live in while building a house). Upon his return, we will load up and head that way. I don't like switching schools with only a few months left, but we won't be able to handle two mortgages. Lets just hope winter is mild in Kentucky for just this year.

We traded our commercial air compressor for a stock trailer. Decent deal actually. We would have had to pay out a few hundred dollars more if we would have outright sold the compressor then bought a trailer.

We are taking most of the sheep and four cows with us. Murial, Yart, Xuxi, and Urth. We are not allowed to transport birds or sexually active bulls.

Not much else to tell you on this subject. We are packing and selling off things we can't take with us. 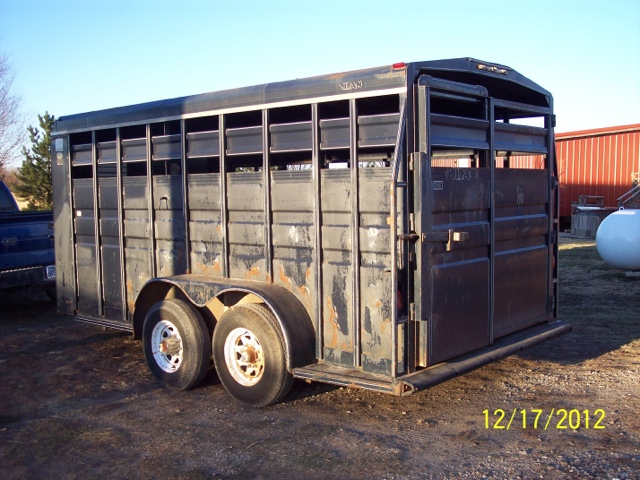 Will you take your cows bred? That's one way of taking your bull's genetics with you, maybe.

Best wishes with it all. Congratulations on your knee rehab; may it continue to go well and get even better. I'm excited for you about the move; may that be even better than your fondest dreams!

Michelle, it depends. I think they are all knocked up, but Urth looks like she will pop soon. And thank you!

I'm glad your knee is healing well. Are you excited for the move? For what it's worth, I'm a little further east and north but up here the worst of the winter is normally mid Feb and then gets better from there. So even if it is a rough winter you should be fine.

I'm so happ to hear the knee is healing.

That is a great idea to drop down a trailer and live out of it until you've built your home.

I can't wait until we're doing the same, it maybe another year or so before we can buy some land and build.

Talk about a great deal on a trailer girl!!!

So glad you are healing. Can't wait to hear the tales about the move & your getting settled on your new homestead.

Good to read the knee(leg) is still making progress.

Sounds like you two are getting your ducks in a row for the move. I think everything in life is a trade-off.

You will probably think it's spring in KY, compared to Kansas.
Congrats on your knee, I'm sure husband takes all the credit!!

Hi, glad that your rehab is coming along well. Rehab sucks but a must. I hope all works out well and closing happens without a hitch. Looking forward to your arrival and pics of the move.

Thanks guys! Yes we are excited, and can't wait for this adventure to begin.

Hah, a cop as a parting gift for the bad neighbors. Big grin!

I've taken a look at my situation here, and unless I find someone to live here and care for my animals while I'm gone, I won't be able to come help you build your home - bummer!!!! See, my big, secret plan is to build an underground cabin on my property and I'd love to get some experience! Dang.

I got a little wobbly in the stomach at your description of how your leg feels as you heal up. Ouch....

Glad for the update on your knee even though it's a bit late. Mobility issues here as well. This time it wasn't me. It was my 91 y/o mother who fell and is in rehab getting strength back to keep herself steady.