I appreciate my readers not running away screaming from yesterday's post.

I have a post called Growing up atheist and celebrating Christmas, in draft. Not sure if you really want to read that. After all, this is a homesteading blog, haha!

We went and picked up some more Milo for the cows. Husband and I's stress levels are so much better now with this find. We talked to the guy and he is going to go ahead and bring us out 10 more bales and we can do a payment plan with him. He is leasing the land the Milo is on, so it would make things easier on him, just to bring out a large order. We would have to miss 2 mortgage payments to be able to pay for the entire order at once. Yep, expensive, however the cheapest I found (plus super good stuff!)


These are the 3 remaining pups. 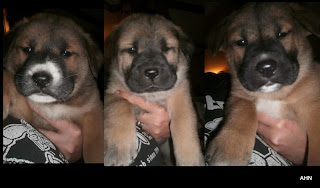 We haven't been actively searching for homes for the pups yet. As they are not yet fully weened. But since day one, people have been placing holds on these um, not very little, little guys. Turns out daddy is an Akita.

Husband and I went and did a bit of Christmas shopping. We do buy the boys a few items from the store. We were taken back a bit by the prices of some things. And could merely shake our heads at some of the toys. Apparently children no longer want to make the vroom vrooom noises when playing with their cars. Now I feel old.

I am working on making a wall mounted marble maze for the two youngest boys rooms. Medium and Small love marbles.  I have some other simple things in the works. The boys will have lots of things to open this year. Mostly homemade.

I found 2 of my 3 roosters dead. At first I thought they might have torn each other up, but that doesn't seem to be the case. Yesterday I went out and found the 3rd rooster laying on the ground, barely moving. I scooped him up and put him in our porch/bunker and let him sit close to the fire. I couldn't get him to eat or drink, and he wouldn't stand. He had a bit of frostbite damage to his comb, but that isn't unusual. This morning his is moving around and being slightly disobedient.  I think what is happening is that the hens are all crowding together for warmth, but the roosters sleep on the outside of the flock to keep watch. I have taken off the rabbit food diet that was suggested to bring about egg production again (still hasn' worked and it's been a month) and put them back on the high protein chicken mash.

Urth (cow) is in her back talking stage. How weird would it be if I spanked her for it?
by Phelan at 11:06 AM

Email ThisBlogThis!Share to TwitterShare to FacebookShare to Pinterest
Labels: misc

Aww...they're adorable! but if Daddy is an Akita that's to be expected. Akitas are beautiful dogs.

I almost had one, had a deposit placed and everything, B's was about 2 months old, but after rethinking the dogs size & strength when full grown we decided to hold off until B's was older. I never did get one, I went back to Siberian Huskies instead. Same type of temperament in a smaller package.

I still tell Catman that sometime before I leave this world I will have a female Akita, maybe as our last pet, since they can be same sex aggressive it would have to be the only dog in the household.

Good luck placing your pups, they really are cute and I don't think you'll have a problem finding homes for the last 3. Are you going to keep one for yourself?

Have a good day
~Fel~
(who oddly enough does not find the idea of you spanking the cow weird at all.)

i can't wait for the Growing up Atheist and Celebrating Christmas post - it is going to be quite the awesome read, i expect!

the pups are simply gorgeous - i would love to take one off your hands!

so sorry about the roosters. i hope your last is going to be ok!

as for spanking Urth - that's your call. and don't listen to Felinae - she's goading you on - bahahahah! i am not sure how a cow is going to handle a spanking...but i am pretty sure it ain't gonna' be pretty - bahahahaha!

I'm teaching one of my day care kids to make car noises, including leaning to the right and making the sound of screeching tires. We have fun at Walmart! She keeps the store laughing as we go around corners.

I buy a lot of my day care toys at yard sales, and all I can find are things with batteries. I've never found any good toys, like blocks or puzzles. I can't decide if people keep those toys for the next generation or if the people here are so dumb that battery toys are all that they buy. I noticed that WM (the only place to buy toys for 35 miles) has almost no classic toys. I bought a tricycle the other day, and the horn requires a battery. It's an outside toy, there will be no battery. If they can squeal imaginary tires as they hot rod around the play room they can honk the horn too! ;-)

Those pups are gorgeous!!

I can tell you that cows don't take well to spankings. Doesn't seem to produce results anyway.

Hubby has found some blocks and a dollhouse at garage sales. An old-fashioned dollhouse - no batteries needed. I looked it up on the internet, it would cost about $125 new!

I hope you do a post with pictures when you finish the marble maze ...that sounds like a great project! All the horses we've raised have required a 'spanking' or two when they were young. Thanks to their upbringing and those occasional 'spankings' none of them grew up to be bratty horses. I hope your rooster pulls through and you find forever homes for the pups. Merry Christmas, Phelan!

I highly doubt she would notice if I spanked her.

Huzzah on all the no battery toys finds!