*Know Your* series review and Giveaway

Fox Chapel Publishing sent me a birthday present! Well, not exactly, but it did show up unexpectedly in my mail yesterday. And what a delight it was! 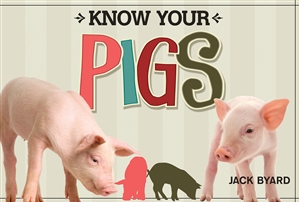 It was the *Know Your* series by Jack Byard

It includes *Know Your* Pigs

and *Know Your* Cows.

These are pocket books that are sold separately.

Monday is library day here at the homestead, as the  boys and I pulled off, grabbing the mail in transit, I was super curious what was in the package. I had no idea that they were sending me anything. Medium ripped it open for me. He was thrilled. Medium is 10 yrs old. He devoured the *Know Your* Cows pocket book. He found our Kerries, but was confused on not being able to find Murrial. I had to explain that the shorthorns that Mr. Byard had in the book was the closest he would get to her (Murrial is an American Milking Shorthorn). In the foreword of the book, Mr.Byard does say that there are a lot of cows out there, and he hopes he can give you a glimpse into the diversity of them.

Large had a grand time with the *Know Your* Pig. I think he has picked out a pet, a very wooly pig.

The *Know Your* series is a great reference for not only children (Mr. Byard is a retired teacher and wrote these books because he discovered that most children didn't know that there are more than 2 kinds of sheep, black or white), but anyone interested in heritage, endangered or just plain barnyard animals.

The pictures are gorgeous, highlighting the best of the animals. And it includes tidbits and trivia about the animals. I highly recommend this series. So much so that I contacted Fox Chapel Publishing to see if I could host a giveaway for you all.

To win your very own set of *Know Your* series (I think it will make a grand Christmas present to your 4-H'er) Leave a comment telling me what your favorite barnyard animal is. Pig is ok, but Kune Kune is much better. I will leave this contest open until Friday. Good Luck!

Email ThisBlogThis!Share to TwitterShare to FacebookShare to Pinterest
Labels: contest

Well my favorite really is the pig....

Ok, I know I'm a freak....LOL! But since I can't have animals right now... I have a list of heritage breeds that I want to get when I can.

Grim, says I'm nuts... But since all I can do is dream then I'm going to dream BIG!

My dexter cattle are my all time favorite farm animal, I really don't know what I'd do with out them. But then again my first word was Pig, and they are cute and personable, it really is hard to pick just one!

My favorites are Shetland sheep and Angora goats. What a great giveaway!

I like cute furry little bunnies - they taste so good...

My favorite animals right now are chickens...we are in the process of figuring out how to build a chicken coop for when it gets warmer....baby steps

My favorite barnyard animal is the goat. Although, our limosine cattle are very tasty too. lol

I love charolais cattle because they have this attitude. One once licked our pickup window as we drove through the in the pasture. Not your average breed and when they're bred with black angus, you have quite the great steak! The books sound great!

Love the covers on those books. I bet the pics inside are fantastic.

My favorite critter on our little farm is my African goose. She's friendly, a great watchdog, and has a deeper voice that's not quite as obnoxious as those of our Toulouse geese. I want another one, but the fiancée said %#$@ no. :)

Pigs are pretty fun to have around, but I must admit, I like them much better in the freezer.

Great pictures on those. I don't have animals besides my cat right now, but I love Shire Horses. I'd also love to raise Red Wattle pigs some day along with a plethora of other livestock.

my favorite animal of them moment is the miniature Jersey cow. I plan on having a milker when I finally get my land, and I'm really leaning toward the mini Jersey!

How cool are these books! I would have to go with chickens as my favorite right now, as we're currently waiting on our eggs to hatch from our broody today!! Woohoo!

If I have to pick one that's reasonable for me to have, I'd have to say chickens- they provide tasty eggs and are all such characters.
Now, if it would be our favorite, favorite farm animal it would have to be Belgian horses. They are awesome!!
Great contest.
Judy

In the category of actual livestock, we've only ever had chickens and, of course ...horses. But I am scheming to get us some Dexter calves when/if this drought ever lifts. Even if I get the Dexters though, I think horses will always be my favorite. I've been a horse nut since I was three which is ...how shall I put this ...well over half a century ago! It's not likely to change.

Right now I love my silver laced wyandotte chicks! But of course, they're still chicks and I haven't had the experience of them as older birds so that might change in the future. My australorp is a grumpy old bugger and my Auracana quit laying since it got cold, so neither of them are my favorite breed at the moment... I haven't had enough time as a landowner to start gathering other animals, so for now, I'm sticking with chickens as my favorite goofy barnyard animals!

I want them all! my first step will be chickens, then hopefully some ducks. Eventually I hope to have a little farm with all the major players including milk cow, goats, sheep, and a sheep dog to go with :)

Jersey Cows. Seriously, who on earth can resist those eyes, that muzzle. . . so incredibly, dewy? Whatever the term would be. Lovely.

Holstein cows! This is a great Christmas present for my husband actually, lol.

The chicken. It's part garbage disposal, bug eradicator, A lot entertainment. That's before the eggs and meat.

Our favorite (that we own) is our big cochin rooster, Mr. chicken!

My favorite past barnyard animal was a big Hampshire pig that had the biggest, softest brown eyes with super long lashes.

Favorite future barnyard animal is fainting goats. We want to start raising spanish goats, but I am going to insist on having a few of these interesting little guys around for comic relief.