After much unnecessary fretting, my Thanksgiving menu

I spent yesterday canning pizza sauce, working on a very cool Christmas present, going through my pantry and asking the boys their input on Thanksgiving dinner.

Many of my ideas got a clear no, in the way of ewwws and throwing up faces from my dear, dear boys. Large's input was a bit different, "not traditional enough." Wait, you're a teen, what do you know about traditional and why this sudden obsession over it? I can only assume that he wants the comfort that a familiar holiday meal gives, that or he is just trying to get in the last word and being difficult.

So it was decided, by the boys, that I was to stick with a traditional meal. And have more pies than we could actually eat in a day. Every time I asked what they wanted then, I got different pies for answers. Small wants a burrito pie.

We will indeed being having turkey, to the disgust of one of my readers (read that in playful jest). We butchered our tom's a few months back. However I did not have the room to freeze two 40lbs turkeys whole. We broke them down. Turkey breast will replace the entire turkey (and it is the size of a football).

I love brined  poultry! With the right brine, you can enhance the natural flavors and break down the tougher bits of a bird. Apple Juice (cider works well too) and ice is the brine of my choice when it comes to turkeys.  And I happen to still have some frozen apple juice from last year. Soak your turkey in it for 24 hours, keeping ice on it to keep it cool.

The breast is skinless, and this will bode as problematic when it comes to roasting. Simple solution on this one. As I will be making Bacon and apple bread stuffing. The plan is to place the breast and a smaller piece of dark meat, into my dutch oven. The breast seasoned with simple salt and pepper, then wrapped in bacon, with 1 cup of apple juice and 1/4 cup white wine. The oven will then be buried under hot coals to cook, outside, for several hours. The fire will not be stoked up, we will be using only the residual heat from the dying coals.  Once done, the bacon can then be chopped up and added to the stuffing. Unless the temp is too hot, the bacon will not be crispy. So chop, quick fry and a toss.

Now the side dishes.

You know about the stuffing.  (Small was concerned we would not have stuffing)

I have been able to come up with things that the only purchase I will be making is that of the dairy products (butter, milk, whipping cream) Thanks to a client and Brain Wheel, I have plenty of nuts. And I should be able to keep my purchases down under $20.

The boys flipped when I suggested Roasted New Red Potatoes. I had just canned a bunch of them in garlic and rosemary. We compromised on garlic mashed  russet potatoes.

A mushroom brown gravy (no giblets)

We do not have any pumpkin, so I will be replacing the pumpkin puree with butternut squash in my Pumpkin Custard pie.

Pecan pie (however I do not have maple syrup so will substitute it with light corn syrup. It still comes out amazingly fluffy for a nut pie)

I found a container of baking cocoa powder, which thrilled me, and the boys, to no end.  Chocolate Cream Pie it is! I will just have to fish out the vanilla beans that are hiding in my sugar.

I will need to make my own pie crusts, including the graham crackers though. And whipped cream (little brandy makes it so comforting)

The menu has been approved by all except Medium, who would rather have less vegetables.

It isn't as traditional as they would have liked it, no broccoli rabe, no green beans with walnuts and tarragon, no peas with hazelnut butter, no Brussels Sprout with garlic and pine nuts.(Wow, we really like our nuts around here)  Popovers instead of rolls.  Hopefully they like the fennel dish. Oh, and no cranberry anything. 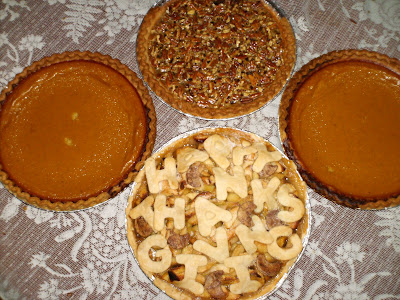 Curious about a recipe not listed, just ask.


reading over this list, it seems like I forgotten that I am poor white trash. This Thanksgiving I will definitely remember to be grateful that I grow so much of my own food, even with a drought we were able to get enough in to have a grandiose menu, or food titles that sound like they are. The ingredients however are very simple and found in most pantries and refrigerators.
by Phelan at 10:22 AM

All sounds very acceptable to me! Of course, I like nearly anything homemade!

I'll be doing a turkey breast instead of a whole bird as well. While I personally love turkey legs as I get to act like a medieval knight swinging the thing around like a barbarian and muttering, "I need more MEAD!" it's hard to cook a whole bird in a toaster oven and since I'm single there's no way I could eat a whole bird by myself.

Please let me know how your fennel recipe comes out. I really love fennel but it's pretty rare to see recipes for it.

Oh, and I'm going to try cranberry sauce from scratch this year instead of canned. That might be a real disaster, but what the hell. Happy Turkey Day!

YUM!! That's all I can say. YUM!!
Hope you have a great Thanksgiving.

Wow, that's a pretty awesome and mouth watering menu. We're lucky that we get to visit family and don't have to cook this year. I get to bring my favorite side though, green bean casserole.

Phreaknik, you can buy leg only you know. And I will let you know about the fennel. I have a cranberry relish listed up under recipes that I prefer to the jelly.

Trans, I love cooking, so I too am lucky :D Hope you enjoy your family visit!

we missed Canadian Thanksgiving (Oct 10) due to all kinds of crazy - so this year we will celebrate with our American friends. i love Thanksgiving and can't believe that we missed it. we like a traditional menu and we never change it (turkey, gravey, baked mashed potatoes, stuffing with nuts and dried cranberries, turnip with maple syrup, brussel sprouts with bacon, and ginger-pear-cranberry sauce). i can't wait for the weekend.

i hope you post some pics of all of your delicious food!
your friend,
kymber

Kymber, we are happy to share it with you. :D I would have liked to of had it a traditional as possible, but we have to save as much money as possible to be able to buy and haul hay.

vuesAll the above served with love and hope will become a very fond memory in the years to come along with a valuable lesson for your children. I love you attitude and can do spirit. Have a wonderful day.

Sounds awesome! You are really doing it up!

mallardhen, definitely. And you too!

Luara, holiday's are a good excuse to play with your food :D