It's a pretty typical response, Husband and I roll up on our bike. I slide off and lift my glasses. If we are at a gas station, the men stare at the bike and the women make room. We get a nod here and there from the grubby looking men, and smiles from the yearning women. But mostly it is avoidance.

We are dirty. Covered in road grim from the miles we have traveled. We are sore, a bit tired, sometimes our legs take a moment to stop wobbling. But we smile all the same. Delighted at the beauty we rode past. We laugh  at something we might have seen, but unable to joke about it over the sound of the pipes that sing to us on the road and echo back into our ears. The sound of loud pipes bouncing off concrete tunnels or empty barns is a music that few seem to get to enjoy, over even understand. The smell of wet alfalfa, insecticides, cattle lots, and moving water is different when you are out in the open. Stick you head out the car window once and smell the road around you. So much different than standing still or trapped in a car. The sun on pavement shines a bit differently when you not looking at it through glass. The wind caresses your chin and cheeks as you speed down the road.

Sometimes you have to take a bug in the forehead, but that is a simple price to pay when feeling the freedom of the open road. (and a bat once, but that story would spoil the mood)

We have been run out of restaurants, bars, grocery stores and a small amusement park because of the leathers and how we look. We get targeted by police for DUI and drug checks. We haven't done anything wrong, but the reputation stands. People will look away, or ignore us if we pull up beside them. When we spend time with our boys in a park, mothers will pull their children close to them and move away from where we are with our boys.

We get watched in stores to make sure we don't steal anything. When we show up in a unlikely place with several bikes, we are turned away as the proprietor "doesn't want any trouble here".  And why do I have to change to be more accepted. Why can't they change to understand that we are not all 1%ers or criminals.

Husband and I watched a gravel truck push a rider onto the medium of a highway. The bike flipped and the rider rolled and slid across the shoulder. Husband pulled over, and I, 8 months pregnant, wobbled across the busy highway. Husband took off with the other boys to chase down the truck driver. Only one other person that saw it happen stopped. She stayed in her truck and called 911 while I kept the rider talking to me, waiting on both Husband and ambulance. The police said only 1 call to 911 came in. It was rush hour.

My friend Brain Wheel,  ran down and dragged under a Jeep, now paralyzed from the waist down. Insurance covered the initial hospital bill and 1 years worth of therapy. But not the resulting surgery he just had to have or more therapy.

Bubbleman was waiting to turn when a women on a cell phone hit him and crushed his chest under her SUV. No charges filed against her. He use to do the giant bubble tricks at the fairs, and had two little girls under the age of 5.

Animal was Santa Clause to so many of us growing up. Every year his bike would be weighed down with toys as he lead the procession of toys for tots. He went out of his way to deliver toys personally to some of us. He was married to the same woman for 40 some years. A dirty looking biker. Diabetes and a bike wreck took his legs. A few years later he took his own life because of depression, he was in his 60's.

I could list a couple more friends and mentors that have died because of others mistakes, or blatant stupidity when it comes to watching while you drive. We are the older rides, the ones not zipping in and out of traffic. So many have been lost simply waiting to turn. Few people are willing to stop and help us. I have pushed a motorcycle more times than I like to remember.

I support the Downed Bikers Association. If I knew they were around when Animal lost his legs, or Brain wheel ran out of insurance money, or when Bubbleman was killed, things could have been different for their families. If something happens to Husband, I hope that they will be there for us. They are still a small organization, still growing. Their members sit with those in the hospital and help the families through friendship and fundraisers. They are there when these families need someone. Lets help them grow, lets get the word out about this group, help them build more chapters in other States. We have groups and organisations for other individualized lifestyle or mammals, why should this one get ostracized simply because they are bikers?

You can almost touch the butterflies that hang in the air as you slowly accelerate past them. 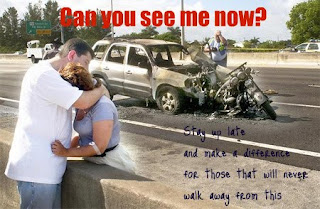 Please support me and The Downed Bikers Association on July 30th.
by Phelan at 2:21 PM

Email ThisBlogThis!Share to TwitterShare to FacebookShare to Pinterest
Labels: blogathon

YOU KEEP WEARING THAT LEATHER WITH PRIDE, MOTORCYCLE MOMMA! I have been given that hard time, too. My son has been criticized for the clothes he wears and told they are not nice because they have the Harley logo on them. I told his teacher that it was funny how she claims to be so wonderful but I did not see her in December on the Toys for Tots ride taking toys to kids who would not have a Christmas otherwise.
I also have never seen her on the Little Angels run that raises money for a group home for the severely handicapped. As a matter of fact, I've never seen her on one of the Poker Runs that raise money, either.
Funny, I have seen big burly bikers laughing and talking with these kids like they do with all other kids. That is rare for adults. Most adults I see don't know what to say or do when confronted with a child who is "different" mentally or physically. Never seen that from a biker.
Keep on doing what you do both on the homefront and on the biker front. We need more like you and your husband!

Thanks jlandrist. There is a misnomer out there about bikers. One that even some bikers believe.

I have a great story about getting kick out of Eskimo Joes. All because people are frightened of us. It amazes me sometimes.

It is the life we choose to live. I knew coming into it that this life of riding ain't for everybody. (by the way, what ya got against 1%ers?)

Don't think I said anything against 1%ers. a matter of fact (oh yeah you know where this is going. . .some of my best. . .) my machinist is a 1%er from way back. I adore the guy. But this blog here is geared toward homesteaders, many have never had anything to do with bikers, let alone 1%ers. They only know what they hear and see on tv (not homesteaders but cagers in general)

In 1963, my two of my classmates were on a motorcycle, turning into our driveway on hwy. 278 in Memphis. An 18 wheeler coming down the hill rear-ended them. They were coming to my house to go frog gigging with my brother.

The boy that ended up in the ditch across the road lay silently with a knot on his forehead. The other lay in the road in so much gore, they declared he would die since the truck tire got his abdomen. He actually lived because the gore was his mutilated leg. The friend lying unconscious in the opposite ditch died.

Last week I talked to a friend from high school who rode the same bus we did. It turns out the dead boy, Ken, sat by him on the school bus everyday.

I am so terrified of hitting a biker that I will do anything possible not to drive behind one. I will pull over and sit by the road to avoid being too close. All four of us kids are terrified being close to a biker, fearing we will hit someone and kill him or her.