Well, another mundane day of the week

It rained most the day yesterday here. And it was a cold rain.

Large neglected to get the chicken condo door shut and most of the layers and their escorts got out. I let it be. Usually I don't let them out without me on guard as they seem to be programmed to run over to horse neighbor's house to be eaten by dogs. With it raining off and on like it was I figured they would stay close to the condo so they could get out of the rain. I was right about that.

However the butchering roosters that free range didn't come into my calculations. See I am not the greatest with math, I leave out important factors. I had a few fights going on. I managed to get them to calm down a bit, but one of the butchering roosters got a small blood spot on it's face. This sent the other butcherers into a frenzy. And there was no easy solution to calming them down.

I started throwing feed into the open door as the rain began falling harder, all the hens and their escorts came flying out of the woodwork to get inside. However I had managed to trap in one of the butchers, luckily he was more interested in the fan dance the proving himself to the escorts. With them out of the way I could deal with the butcherers. Turns out locking the hens back up got their attention. They were not happy with me, and started fan dancing around the condo. But the damage was done to the one, his face was all bloody. He was still cocky though and strutted proudly to his roost to take a nap. He should be fine.

Late last night I kept hearing the cows mooing. However there was a truck across the street and I figured it was because of that. Truck equals food. I woke to Winston throwing a hissy fit this morning. Turns out the 2 of the spry cows (Winnona and Urth) broke the top rail of the fence ad had hopped over. I wouldn't have thought Winnona's belly would have allowed her to clear that fence. Right now they are roaming the front yard. I figure I would let them do a bit of trimming before rounding them back up.

I was asked about bug out bags. Here you can find a bunch of info on creating the perfect bug out (or hunker down) bags for you and your family. American Preppers Network 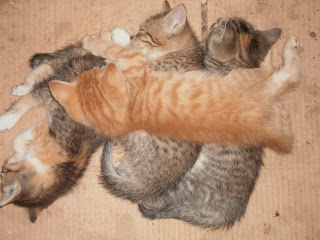 I am feeling just fine. The symptoms of a mini-stroke only last 24 hours. I have't had another one, though have had a couple of migraines since it happened.

Ok off to round up some cows and harvest some wild alfalfa for tomorrows EO(s).
by Phelan at 8:43 AM

Glad they are all okay.

the emergency bug out bag I won from you almost a year ago has made several trips to the basement this tornado season. thanks for the bag, or rather, the opportunity to win the bag. it's been great to have and a comfort to think I have it ready to go.

oh you got it! good. I worry sometimes that the prizes don't get out.

Skippy that is a mundane day around here. What blog have you been reading? Urth is making baby cow noises. Yippie will be here soon. ;)

Don't yah love them escaping critters. The other day Staci, our old ewe, bounced the chain off the gate and wandered out, luckily I grabbed the gate before everyone else followed. Then, later the same day, Two, the other ewe, thought I was bringing feed, ran at the fence, jumped and cleared it, flipping onto her back at the last. Luckily she was so shocked she made it, I was able to grab her by the wool and get her back inside. I'm hoping she doesn't remember she can do it... Glad you are feeling better, hope the headaches stay away.

Sounds like you have great fun.
Who are the kittens ?
Céline