Random bits of what's left of my sanity

Sorry about my little rant yesterday. Sometimes you just have to get something off your chest. I was already a little moody, as I was talking about my father and his hospice roommate with another blogger yesterday. I was sadden by the memories, and all those lonely vets in the VA Hospice. And then I heard some very vile things spewing out of so called journalists mouths. One of them I thought, she might not understand what she is actually saying, not realizing that she is referring to the protesters in a sexually derogatory term. But I realized very quickly that this was her own protest. I became personally insulted at that point. Other people kids.

I went outside and spent a little time with Courage. I realize that all the calves I have been around are super curious, but Courage is something else. She is brave as well. She is willing to walk up to me, even with Murrial's protests. Courage follows me around, and this makes Murrial anxious. She isn't as welcoming as a long time handled cow, Murrial still has issues with me, but as long as I bring her a treat, she will allow me to be near her and her daughter. She did tag me the other day. I was scratching Murrial's head, and I guess she decided that was enough as she was out of treats and attempted to butt me. She slid in the mud, so the impact wasn't as painful as it could have been. It was also into the palm of my hand, it hurt my shoulder. My yell of disbelief, startled her, and she didn't know what to do after that. 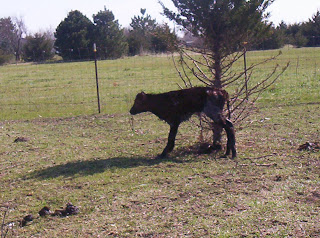 I have been looking into inexpensive ways to build out building on the farmstead. I think I would like to build my ice house out of used tires. I am trying to convince my husband to allow me to experiment a bit, and build a new goat house out of the used tire technique. This will at least give me a structural idea as well as climate control. Of course one side will be open, no door. But if the interrior still stays cooler than normal shade, I might have something. Has anyone ever done anything with used tires? I guess I should say, built a structure with used tires.

I dreamed about foxes again last night. I am so paranoid about putting the little chickens outside because of that fox. We can't seem to get rid of it, and I don't want to lose more birds to it. The good neighbor has lost so many, he is just a tad angry about it.

I was offered a Miniature donkey yesterday. It hasn't even been born yet, but I don't think they are wanting to train it, and that's why I got the offer. I will not be taking on more animals until I am out at the farmstead. I am out of room here.

Spring cleaning begins today. Not just the packing up this and that, but full blown cleaning. I made a deal with my husband last night. Let's just day that I never have to be dragged to another one of his family outings again. I love my husband, and not sure how he turned out the way he has in the family he was dealt. But after 13 years of trying to be part of that family and still being viewed as the whore he knocked up and the relationship is only temporary, I kind of give up. Believe me, I am thrilled about this deal. It makes life seem so much more pleasant. That sounded mean, didn't it?

The bees are out in full force. Swarming the dandelions. My tulips haven't bloomed yet, so they are making do. I love it! I get very excited to see them zoom passed my head. I have to remind the boys that they have to wear shoes, we don't want them stepping on the bees again this year. Unfortunately one of my hive seems dead. I will leave it be for now, as my mother's bees seemed to leave in the winter and then return. Good neighbor's hive seems to be dead as well. We will give them time to return. 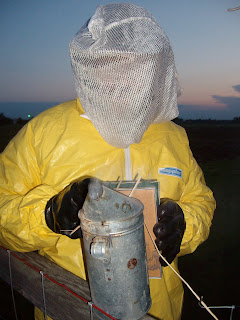 I think you can be more than forgiven for yesterday's post. I'm thinking of a term for that reporter but I suppose it's not politically correct to use it toward her. GRRRRR.

Courage sounds amazing and maybe she will be the link that draws Murrial in even further. The things we do for our kids. LOL

I hope the bees do come back!

I used to grow tomatoes in old tires laid flat on the ground. But then I heard that tires contain a lot of lead (relatively speaking). So now I'm not so keen on using them around my food. It could be apocryphal, but it might be something you want to look into before building with the tires.

I love the name Courage, btw.

I love your pic at the top of your blog!

I do my entire garden production out of 150 logging truck tires. I will be building a Walapini lined with tires and a root celler using the same technique. Tires are a free and mostly underutilized resource.

I, too, would be concerned about lead or other chemicals leaching out of the tires and creating problems. Maybe you could find pallets in your area to work with. In my area, pallets are essentially free wood!

From EarthShip Biotecture"based upon all of these studies, it can be said that the potential leaching of toxic pollutants from scrap tires is minimal"

From Touch the earth ranch houseThe surface of used tires has been subjected to years of exposure to oxygen by high speed rotation in the atmosphere. This exposure causes a phenomenon called oxidation. Oxidation 'interlocks' the surface molecules with oxygen and 'out-gassing' (fly-away molecules of synthetic rubber) is considerably limited, if not stopped completely. It's the new tires that stink/outgas, they just need to “rust” for a while, before they are suitable for use as a building material.

I wish I could remember where I saw it, but I saw a really great chemical study done on the tire thing. The results were mixed, but mixed enough that I would be very leery of using them as planters for food products. Time changes the chemistry a bit.

For the icehouse though, that sounds a very great plan! Great structural strength, temperature shield and longevity. I don't see why it wouldn't work.

The icehouse at Colonial Williamsburg is fantastic. If you can get to the diagram of it online it may provide some good info since it was build in the early 1700's and is still fine. I was just on top of it this past weekend!

And I love that pic also. Can you tell us about that at the top of your blog?

Ah, bees on dandelions are the EXACT reason why I don't apply chemicals (weed killers) to my lawn. I {heart} bees.

"Sorry about my little rant yesterday."

Congrats on Courage...and the miniature donkey. And no need to apologize..you rant so well. ;)