Winter puts you completely out of shape. One can not laze about all winter and then think they can go out and hoe mounds in a 1,200 square foot potato bed and not think they will be sore for the next week. Nor can one expect their hands to still be callused up and won't get broken blisters on just about every part of their soft hands.

I scrubbed out the cattle tank. I have stuff in it to prevent algae growth. Either it doesn't work or I didn't keep good track of how long it was in there, and when it needed to be replaced. The de-icer kept the water nice and warm and the build up was incredible.

Sable, the smallest of the triplets died this weekend. It looks like her mother laid down on her and didn't get up until I walked out there. I went out to milk, and heard this odd crying noise. I got my oldest to run and get me the flashlight. We found Sable laying under the truck topper, one of the many shelters we have out there for them. She reminded me, if any of you have cats you might now the look, of a kitten after it's mother has smother her. She was still alive, so I ran her in the house and tried to get her to drink something. She wasn't interested. I called my husband, but by the time he got home, it was too late. Yet another reason to get my truck running. That way if something like this happens again, I can get to the vet on my own. The other two kids are doing fine. They are playful and demanding.

On a happy note, Mama wanted to say hi! Also, Small got to play with my camera this weekend. 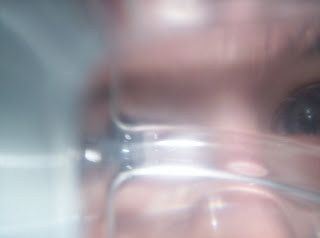 Now you tell me what this is. 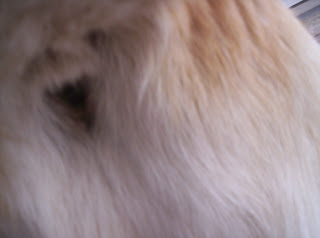 When I told Small what I thought it was, he giggled and told me no.
by Phelan at 7:27 AM

I'm so sorry about the itty bitty one! How are the other two? Will you have to separate them to keep her from doing it again?

Is that something that happens a lot?

SOme sort of gap in fur... maybe near an eye or something.

But probably not what I thought in the first place... ;)

I am so sorry about the little one. :( Glad the other two babies are doing well.

Sorry for your loss, you obviously did everything in your power.

Either that last photo is moething's butt...or it should be.

So sorry about the baby. Life can be painful sometimes. As for the picture, I would guess a doggy rear. If the Kansas wind blows any harder I don't think I will be here in the morn!

So sorry to hear about the little one. As for the picture..um, I know what I'm thinking but I'm guessing it was your first thought as well so I must be wrong. Definitely something furry.
Judy

Sorry to hear about the loss. We are trying to make do with one vehicle too and it is not always easy!