Murrial is a good strong name

I missed out on the adventure. But my husband and Medium got to go (Medium is my middle son). They left home around 9 am, off to Missouri. This was the first time Medium got to leave the state, and he was thrilled about it.

I don't know what really happened between here and there, except that Medium is now in awe of his father because he could feel them crossing the State Line.

Medium managed to take a few pictures for me, before falling asleep during the 4 hour drive. 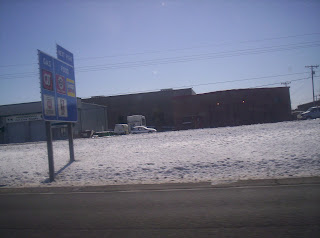 There are more, most of them are of snow. 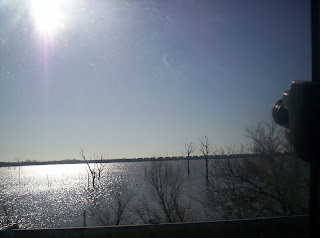 They made the long trip and arrived at Nile Valley Farm. Turns out that the animal we were after, were all gone. Someone showed up the day before and bought them out. The rancher I guess felt bad that we had traveled all that way, after just one, that he took my husband out into the fields and showed him a few of his breeding stock, the worst of his best. If ya know what I am saying. A deal was struck, a very good deal I might add, and they were headed home.

The rancher has some very special awards. Out of 247 farms, his animals have won first place many times. I had no idea of this when I set up a time to come out. I am stoked! Not only are these animals the best, but I managed to get one that he would not have normally sold, but was willing to part with. A Top quality animal.
This is Murrial. To be honest, she doesn't have a name, but her great Dam was a Murrial, her tags proclaim Murrial, thus we dub thee Murrial. Murrial is an American Milking Shorthorn, polled, Roan. She is 4 years old, and due to give birth in a month. The American Milking Shorthorns are on the Conservatories short list, meaning critical. ( For those of you that don't know, the Conservatory lists American Barnyard Animals that are endangered) She is 58 inches tall. This makes her larger than my Dexter (42 inches) but still in the medium sized category. She shouldn't eat too much more than our Dexter's.
After Murrial gives birth (bull= Houstus, Heifer = Courage) She should start paying for herself within a few months. I have all of that figured out, but due to legalities of my state I can't get into all that.

Murrial has spent her entire life as a breeder. She has never been touched or trained. Sound's familiar doesn't it? Just like my Dexter Dams, I will have to train her from scratch. If one is willing to do such a thing, one can save themselves a lot of money. A well trained cow that isn't being culled for various reason, can cost a pretty penny. oooohhh shinny. Something we don't really have.

Was the news worth the weekend wait? ha!

I see CHEESE in my future!! YEAH!! Congrats she is gorgeous!!

What a pretty girl! I am glad H and Medium didn;t have to come home empty handed. And I am loving the names - that cartoon is a hoot!

Congrats on your new addition to the family! She's a beauty...!

What a great deal!

(Does this mean I missed seeing you guys?)

Wow, what a beauty! I didn't realize American Milking Shorthorns were on the ALBC list! There's a dairy around here (in Tennessee) that still has a few but they are slowly getting rid of them in favor of Holsteins.

I can't wait to hear how she milks!

I've never seen one before, she's a pretty girl :) Congrats!

Congrats on the new arrival - and on the Excellence in Blogcasting Award you've gotten. :-)

Murrial is lovely. I didn't know there were endangered farm animals, but I guess so, now that I think of it. (my city girl ignorance is showing)