Warning farmer Phelan, warning! Oh maybe it was Doom on you, doom on you! That's what it felt like as I set forth yesterday morning to pressure can for the first time. The hot water bath method is very simple, but this. . . this was something I had heard horror stories about. Women getting there eyes gouged out, their faces shredded by shards of exploding glass. ok, that's me being dramatic, I have never heard, nor known anyone that has been seriously injured by canning, although between the older women in my life and these homesteading books, I get a distinct impression of potential danger.

There were a few things that the books didn't cover, and when I asked other's in the know, they informed me that it was something that you figured out on your own. How great is that? That would go back to my theory, that living the simple life can cause boredom, and one must amuse themselves by giving faulty or incomplete advice to newbies, just so you can get a laugh at their expense. I hope you got a good laugh ladies, I really do.

It wasn't all that bad. But I am sure my frantic phone calls and making them listen to the pressure cooker over the phone got a chuckle or two. Now let us begin.

The hardest part of the project was washing, sorting and cutting the ten pounds of greens beans I had acquired. {More accurately, grown} I spent a total of 4 hours doing this, it could have gone quicker if my children hadn't been so enthusiastic about helping, and if my husband would have been as generous as to help 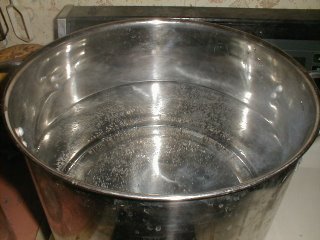 While I was staining my finger green, and causing premature arthritis, I set my largest pot on the stove. The water heated would help sterilize my jars, jar lids, screw tops and any utensils that would be involved. It seems to take a good four hours to get this much water to boil. Once I decided it was boiling {It never looks like it is, but the sound could have fooled me} I turned the flame off and put my cans and others into the water. 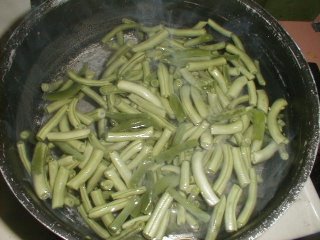 Next step was to blanch the green beans. Ok, so far so good. I can do this stuff. There are some books that say to blanch, while other's don't mention this step. I would suggest that it would be up to you. But I think I might just skip this step next time. 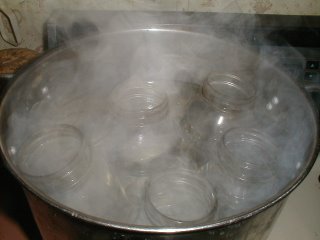 I placed five 1 quart jars into the sterilizing water. I wasn't clear on how many I would need. Turns out for the first batch, I only needed four 1 quart jars. I feared I would need more than that.

Once the beans were cooled, I packed them tightly into the jars, pouring the hot water I had blanched them in over the tops. Leaving about 1 inch head space. Here's where I become injured, ok it was merely a good owie as I scalded myself. Nothing that I haven't done before. 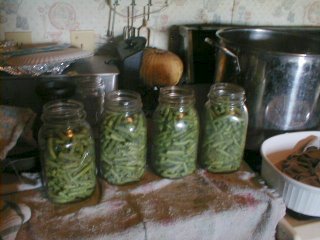 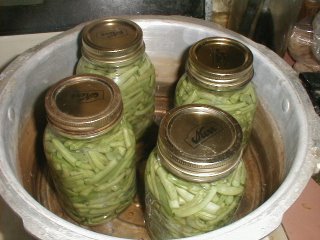 I placed the lids on, poured about 3 inches of water into the pressure canner and set the jars on the rack. It took me about five minutes to figure out how to fit the canners lid on. It wasn't willing to work with me, My dad made a suggestion, used some psycho babble and reasoned with the canner. Apparently she liked him more than I did, and the lid was twisted and locked on easily. 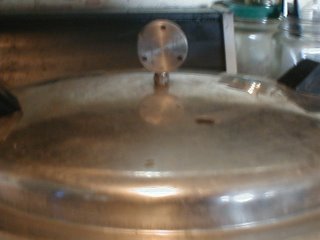 Hopefully you can see that round knob at the top of the lid. That is the weight gauge. I don't have one with a dial, that's too high tech {and expensive} for me. The weight gauge is placed {at 10 lbs} on the steam valve after steam has escaped for a good ten minutes. The you must sit there and stare at it, listening to the hissing and wondering what you are suppose to be listening for. How can you tell there is enough pressure in the canner? Silly girl, the weight gauge rattles in a rhythm. Why thank you, that explains it clearly.

What is this rhythm? No one can describe it, or so it seems. "You'll know it when you hear it." I am tempted to explain to these people that I can be rather slow, dense would be a good word for it. So I waited, and waited, and still it only hissed. But suddenly, something happened. The weight gauge jumped then rocked and rattled. This is it! I made a phone call, "Listen to this." I help the phone up so that the person on the other end could hear what the canner was doing. I was informed that this was indeed the sound I was waiting for. The sound, what? You want me to describe it? Oh, you'll know it when you hear it.

It reminds me of a steam engine trying to increase its speed. You've heard it in old movies. If not, find a Humphry Bogart film and wait for the scene where he has to leave his best gal at the train station, and you'll get the idea. {allow it to rock continuously for 25 minutes for quarts, 20 minutes for pints}

Here is some more confusion, for me at least. What happens when there is more pressure than you need? No one told me. What happens when there is not enough? The rhythm slows down. I started the timer for twenty-five minutes, when the rocking stopped. So I turned the heat up. I was wrong, the pressure was too high. Apparently the weight ceases to rock when the pressure exceeds what you have the weight gauge set to. Who knew? I assume people with common sense would know this, I figured it would have bounced faster. Luckily, none of the jars shattered.

I successfully canned 4 quarts of green beans. Now only four more await me today, and untold amounts await in the garden.

My grandma used to can all the time but I don't think I can remember any of the steps. I'm sure if it had been me, I would have blown up the house.

I am stopping by to invite you to participate in the The Carnival of Home Preserving.

It is a Carnival to Share Recipes and How-To's for Canning, Freezing, Dehydrating (drying), and Root Cellaring of Fruits, Vegetables, and Herbs.

The first edition is posted if you would like to come visit:

Submit your blog post (new or one of your archived ones that meets the above description) to the next edition of carnival of home preserving using the carnival submission form.

The Deadline to Submit is every Sunday 6pm EST

The Carnival posted by that Monday on the respective Host's blog.

Everyone is welcome to join in (beginners and experienced alike).