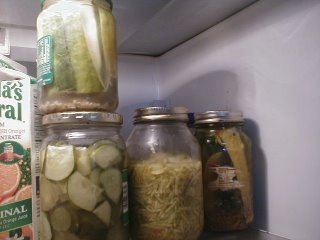 I had three very large cucumbers to deal with yesterday, and discovered that I was out of vinegar. I have mentioned before that I am nowhere close to a store, and there was no point in wasting gas just to get vinegar. I thought about making cucumber soup, but then my husband is the only one that would eat that.

I rifled through my fridge and found that I had saved the pickle juice for store bought and homemade pickles. BINGO! I cut up the cucumbers in slices and stuffed them into the jars, bread and butter pickles, sweet pickles and dill. I also went and shredded some cucumber up into relish. {Though personally I think it looks more like shredded zucchini. We will see in a few months how well these quicky refrigerator pickles come out. 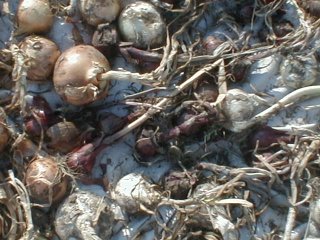 After the heat exposure yesterday, I had no plans on going outside. But my animals needed fresh water, the sprinkler in the garden needed to be moved, green beans needed picked and onions needed to be set out to dry.

I was too thrilled about being outside, even in the early morning the temperature was in the 90's f. {The high was 108f}

I laid out the onions on a torn bed sheet in the middle of my driveway. We have several types of onions, large, small, sweet and "normal", red, white and yellow. I only lost 6 from rot.
I planted more than 400 bulbs, some are still in the ground. From past experience, I only expected half to survive. But we planted them as soon as the ground was workable, still winter. Almost all of them thrived. Wonderful! {Don't know yet if that is sarcasm} 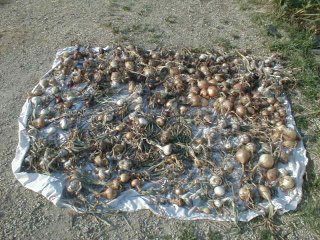 Here they are laid out on the sheet, think we have enough to make it to next harvest?

I want to thank those of you that have already sponsored me in the Blogathon. Those of you that haven't, it isn't too late. On July 29th bloggers from around the world will stay up and blog for 24 hours, raising money for the charity of their choice {I had a dream last night that I missed the blogathon} I have chosen Farm Aid as my charity.

Every donation helps. To help tempt you into donating, I thought about having a drawing. For every $5USD you donate your name will go into the hat {$10USD will get your name in twice and so forth}
The prize is a book called

This is a bookcrossed book, but as the winner you are under no obligation to BookCross it.

How are you recovering from the heat exposure? I've been worried about you.

I plan on donating but please remind me if I haven't by Friday. (I can't do much, but I'll add what I can.)

I am so glad that I'm not the only one who has dreamed about the dratted Blogathon!!

And I really like your homesteading stories -- you're cracking me up!

I hope you're feeling better after the heat!!