Get along little doggie.... 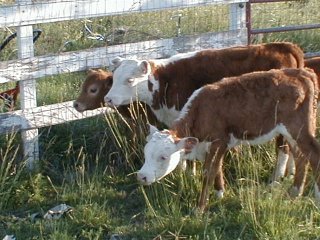 My brother-in-law came by this morning and took all but one of the calves to auction. He told us that he would only take one {to test the waters} but it seems he has changed his mind. He left one small {short and stout} bull that he has named Bones. My brother-in-law has these grandiose visions of him riding Bones through the fields as one would ride a horse. The thing is, this is the same man that couldn't tame a donkey and ended up giving the poor thing to someone else to break. I really don't see him breaking a bull.

The calves taught me a bit {how to avoid stepping in manure} but not enough to help me decide if I want one on a permanent basis. They were not here long enough for that. I have no idea how long Bones will be with us, or if some of the calves won't sell at auction, and be back with us. If we do decide on taking on a cow or two, I want it to be a milking cow. We spend more money on milk than we do beef in this house. I know it will be more work for me, but in the long run it will save us money. My boys can easily go through 3 gallons of milk in a week, more if I allowed it. And at $3.00USD a gallon, I can't afford to keep this up. A milk cow sounds better and better.

We are discussed the mulch issue. We have decide to go the way of a winter harvest and sweet clover next year. Let's see how that works.
by Phelan at 9:21 AM