Are you turning them?

I was asked if I was turning the eggs that my brother left behind. The answer is a yes, and no {ok, kind of} I turned them once a day. But after this question I felt the need to consult one of my books. They inform me that to keep a chick from disfiguring, I should be out there turning the eggs five times a day. Of course I am far from doing that, and expect {should they hatch} there will be a few one legged, no beaked, flat on one side of the body, chicks. Maybe the pure freak show nature of the chicken will bring in some extra money if I sold them to the goth kids. {Oh, I like goth kids, I was one back in the day. That makes me laugh, maybe I should warn them that before they are thirty, they will be living in the middle of no-where playing house wife and farm hand.}

I have been playing with the the idea of candling. I have yet to be successful with it, but it is another thing that I must try, try again if I ever want to be completely self sufficient. Out to the chicken coop I go, the darkness not complete, but it shouldn't hinder the candling process, for the books say nothing about how dark one's room should be when atempting such a thing. I must say that I do this at my own peril, for my goose does not like the odd visitor so early in the mornings. She has taken up resident in the whole of the bottom nest box. It should hold 6 chickens with ease, but every morning you are sure to be greeted with the warning honks of my African Grey gander, Gander { why yes, we are an imaginative bunch when it comes to naming} Goose had managed to run off my husband, but she is a smart one, and knows better than to bite {or in this case goose} the hand that feeds her.

Have I ventured to far from the subject of egg turning?

I believe I have mentioned before that modern hens have had there setting instincts bred out of them. Which is a shame. For now the independent grower/raiser must invest money into an incubator. Maybe leaving the eggs out was almost pure fantasy on my part. I knew/know the consequences of my rash actions. But there was hope there. A flicker of flame that was ready to jump trees should I have seen one hen sitting on the clutch. But a new nest has been created, one that lays precariously close to the unattended clutch of 28 eggs. The hens have shunned that area, and will not even lay new eggs there. I think this attempt of hatching out our own eggs is a complete failure. And something in my head {it's called my husband} says there is a conspiracy between the hatcheries and the manufacturers of the egg incubator. Why allow nature to run it's course, when you can spend money to allow a machine to mother your chicks? Have we become that lazy as to rub it off onto our livestock? {I have been reading way too many homesteading magazines, and their paranoia is starting to sink in} 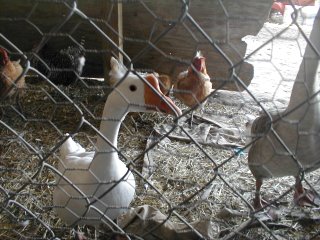 Geese corner me one day while I was in the nursery.
by Phelan at 7:24 AM

The candling page was very interesting. I don't think we ever got any of our eggs to hatch out but then we only turned them once a day.

I had no idea about the egg-turning thing. Perhaps this is a stupid question, but do eggs need to be turned if a chicken sits on the nest? Or does the chicken turn them herself?

Hello Annulla, No, you do not need to turn the eggs if the hen is sitting, she will do it herself.